After the decline of interest in Japanese animation in the West during the mid to late ’80s, one anime feature film in particular is credited with spearheading the Western revival of Japanimation fandom that occurred from the early ’90s onwards. Of course, I’m referring to Akira, the film adaptation of Katsuhiro Otomo’s famous manga epic.

If you’ve been into anime for more than a month and you’ve never heard of Akira, then you need a better source of info or a slap upside the head – maybe both. OK, so maybe long-time anime fans roll their eyes whenever someone mentions Akira and say, “Not this again”, but that’s probably because the film has been re-released and screened enough times to make anyone a tad ill.

This happened because, in all honestly, it’s a superb film. Notice I deliberately didn’t say “superb anime”, which I do for a number of reasons. Firstly, Akira is good enough on every level to transcend the ranks of anime and compete with the highest quality Western animated productions, and even films in general. Secondly, Akira is a shining example of what the anime industry could have been producing had it not lowered its standards to produce trash with bromidic stories, ridiculous outfit designs, factory-line characters, and recession-grade animation that makes up the greater percentage of anime we receive today.

For those who don’t know, the movie follows the story of Kaneda, the juvenile leader of a biker gang in post World War III Neo Tokyo. Kaneda’s best friend, Tetsuo, is kidnapped by the military after a gang war, and shortly thereafter begins to develop almost godlike psychic powers. Now that Tetsuo has the power to stand up against armies, his hitherto strong inferiority complex fuels his lust for vengeance against those that oppressed him, as he wages a one man war to take over the city. It’s up to Kaneda, with the help of some of Tetsuo’s fellow test subjects from the military, and a young female underground resistance fighter named Kei, to stop him before he loses control of his incredible power.

The obvious highlight of this Region 4 Blu-ray release is the high-definition, 1080p, 16:9 version of the movie contained on it – and the five minutes of extra footage. It’s beautiful enough to interest even those who have seen the film one time too many on VHS and DVD in the past. Unfortunately, there are two minor drawbacks, the first being a severe lack of the cool extras which are supposed to be part and parcel of the Blu-ray deal. All we get are a few trailers and some storyboards. The second snag is the loss of the original 1988 Streamline English voice cast starring Cam Clarke. In its place we have the bland 2001 Pioneer dub.

Still, this is a great way to enjoy one of the most iconic Japanimation films of all time, whether it’s your first viewing or your seven hundredth. 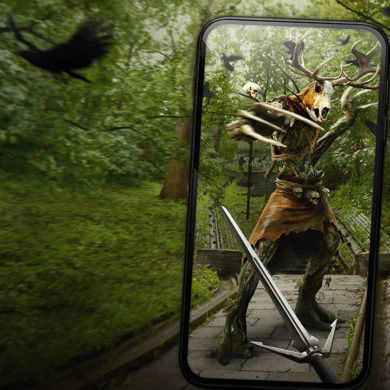 The Witcher: Monster Slayer brings the hunt to your doorstep