Day 2 of rAge 2010 has come to a close. Busy, teeming and packed are all appropriate words to describe the expo’s busiest day. Fortunately there was more than enough gaming awesomesauce to go around and no-one left unfulfilled. 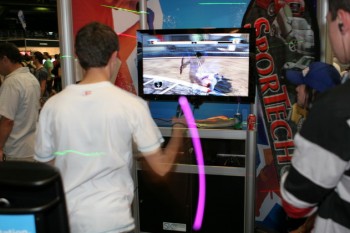 The Next Big Things from Microsoft and Sony took up a big chunk of rAge floor space – both Kinect and PlayStation Move had large stands with multiple games of various genres on display. There was definitely no shortage of people eager to try their hand at these new interfaces, and much arm waving and butt shaking was in evidence. Kinect is impressive the first time you try it, with the device’s uncanny ability to track your movements providing a unique hands-free way to play. Even in the chaos of the expo, limb movement tracking was uncompromised and very effective. The Move takes a different approach, tracking handheld controllers – while this is not as flexible as Kinect’s full-body capability, it offers greater precision and this translates into more detailed game-world interaction. While one might feel a little silly waving a pair of pastel-coloured blobs around, the ease and efficiency of control far outweighs any shyness. Overall, the Kinect-enabled titles were primarily of the casual sort while the Move offered greater variety and included some more intense games. 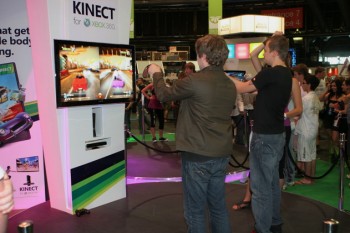 We spent some time with Dragon Age 2, which is looking great. BioWare set out to improve the graphics over the first game, and it shows – big time. Visuals are sumptuous and there has been a great increase in detail. An interesting new feature is the framed narrative, a way of presenting the game’s story via another story – in practice, this will make the game more cinematic and dynamic. All in all there are a lot of improvements and additional polish to make Dragon Age 2 a worthy successor.

Dead Space 2 is nearing release at long last, and so far it’s exceeding expectations. The whole game is suffused with even more dread and imminent horror across varied and truly gorgeous-looking levels. To quote a passerby:  “I dunno how anyone can play that without pooping themselves.” Interacting with the environment has become more important, and the cold vacuum of space takes on a whole new dimension as you use it to dispose of Necromorphs in a tidy manner. No mess, no fuss, no ruptured organs. There are new bad guys plus new weapons to eviscerate said bad guys, and all this means Dead Space 2 ain’t a simple, recycled sequel. To help promote the upcoming title MMA, EA Sports treated the crowds to some full-contact mixed martial arts action. Several combatants from varying weight classes went toe-to-toe for 3 rounds of 3 minutes each, but in most cases the fights were over in short order. No punches were pulled, no quarter was given, and it was quite an experience to see authentic full-on combat . Despite the visceral nature of the sport all of the fighters exhibited admirable sportsmanship with handshakes and even embraces at the close of each match. The video game itself is highly accurate, featuring well-known fighters and established styles complete with training regimes to ensure your character is on top form for each match.

On stage we had a majorly epic breakdancing exhibition (check out the gallery for some action shots) and several giveaways from MSI including laptops, shirts and other assorted goodies. MSI also presented a very informative talk on overclocking, complete with fulminating liquid nitrogen. 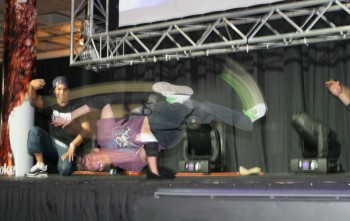 In the artist’s area there was a quick-draw competition where competitors had 120 seconds to illustrate a random topic, from Spider-Man blowing up McDonalds to Knight Rider drowning in a toilet. This was followed by the cosplay contest which had a great turnout of contestants and featured some fantastic costumes covering a wide range of sources.

rAge may very well host a new Guinness World Record, assuming that at least 100 gamers can keep going continuously for more than 40 hours. The current record was set in 2009 at Cyber Fusion in Cyberjaya, Malaysia – but having spoken to some of the local players that won’t stand long!

Check in again tomorrow for more hands on reports, talks from developers on forthcoming titles and all the button-mashing and pixel-chewing you can handle. 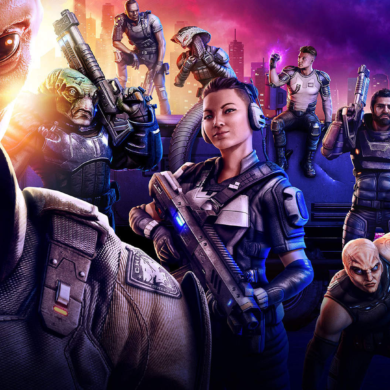