There were probably few people who were looking forward to the release of Lollipop Chainsaw as much as I was. Since I bought my Wii, I’ve developed something of a taste for studio Grasshopper Manufacture’s style of whack-job insanity. I enjoyed being a lightsaber weilding otaku pro-wrestler assassin in No More Heroes, and I loved being a foul-mouthed Mexican demon hunter with a hot boner (it’s a gun, seriously) in Shadows of the Damned.

So when I heard that they were working on a new game starring a scantily clad cheerleader slicing and dicing zombies with a pastel-pink chainsaw, I was immediately interested. I got even more excited when I heard that this one would be a joint effort between Suda 51, the legendary game designer behind the aforementioned atrocities, and James Gunn, a fringe B-movie director who began his career at the just-for-kicks, schlock horror studio, Troma Entertainment, which is responsible for such cheaply-made giggle-fests as Tromeo and Juliet, Surf Nazis Must Die, Sgt. Kabukiman and The Toxic Avenger. With those two damaged minds behind it, how could Lollipop Chainsaw be anything but gloriously batshit insane? 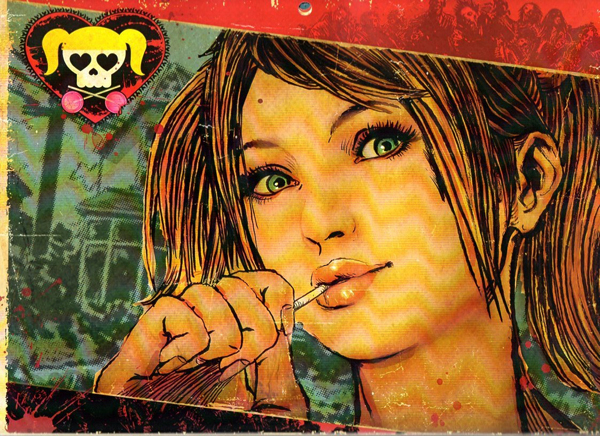 And it is. Oh, my God, how it is. The very moment you start the game, you’re treated to a hilarious video narrated by the lead character, Juliet Starling, who is voiced by Tara Strong, the perfect choice to portray an energetic, bubble-headed, foul-mouthed blonde. From the intro, we glean that Juliet is the captain of her high school cheerleading team, she loves her family to bits, she enjoys eating lollipops despite worrying they’ll make her fat, she has an average-Joe boyfriend named Nick, and it’s her 18th birthday. Oh, she also comes from a long line of zombie hunters, which would explain why, when she arrives at school that morning to find it overrun by the undead, she pulls a chainsaw out of her gym bag and begins slicing and dicing without a moment’s hesitation. Seriously? Are undead outbreaks common in her world? I guess they must be. 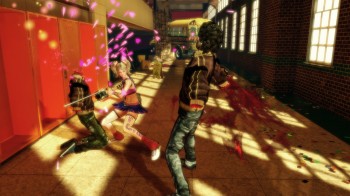 To add a tinge of black-humoured tragedy to the proceedings, Juliet shows up a bit too late to stop her beloved boyfriend from being bitten, which, as we all know, means he’ll become a zombie himself. Refusing to let him become one of the undead she’s sworn to slay, she saves him in the only way she can think of – by decapitating him with her chainsaw and performing some secret zombie-hunter magic ritual to keep his head alive. After that, she carries his disembodied head around attached to her belt while she attempts to find the source of the zombie outbreak and put a stop to it.

That’s a typical Grasshopper Manufacture game setup right there, and believe me, it’s hilarious. My explanation can’t do justice to the execution of it. For that entire bit, and indeed, for the rest of the game, you’ll be pressing on just to hear what the characters are going to say next. I wish I could give you some highlights, but unfortunately, most of the best bits are unprintable, even on an easygoing website. Juliet’s constant air-headed outbursts would quickly becoming annoying if not for the deadpan rebuttles of her beheaded beau, who still manages to have a sense of humour despite not being happy about becoming a fashion accessory. 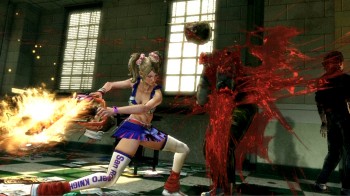 So I guess it’s safe to say that Lollipop Chainsaw has all of the attitude and insanity we expected, but does it have the gameplay to match? The answer to that is… complicated. I must admit, I found the primary combat mechanics a little bland and disappointing. It’s typical Japanese action game stuff – Juliet starts out with a few basic attacks and can learn new ones by collecting coins and spending them at conveniently placed vending machines. The problem is that they’re never truly satisfying or amazing. Okay, the idea is that you get the best score for rounding up groups of zombies and dizzying them with weak pom-pom bash and kick attacks, then decapitating as many as you can at once with chainsaw attacks. Unfortunately, the zombies seldom appear in groups large enough for that kind of carnage. Usually, they’re so spaced apart you need to take them on one-at-a-time. It feels ropey, like it was still in the prototype stages but got rushed out the door. Some parts of it feel unfinished, too. For instance, when you fight Mecha-Chicken-Zilla (don’t ask, just go with it), I could find no way to dodge its attacks – it homes in with unerring accuracy and flattens Juliet every time. Your only option is to get up as quickly as possible and do as much damage as you can before the head retracts. 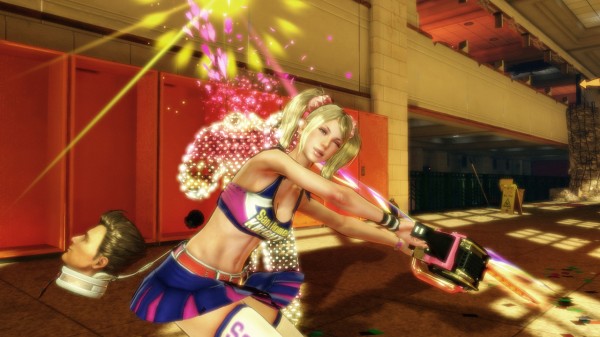 That’s not to say that there aren’t some good bits. All of this second rate hack-‘n’-slash action is interspersed with interesting little surprises and mini-games. As Juliet progresses, she’ll run into her unusual family members, who each give her a birthday present – usually a new add-on for her weapons. You’ll be frequently presented with moving and stationary shooting sections using Juliet’s chainsaw blaster, racing sections using her chainsaw dash, and even a few sections where you drive a combine harvester to kill hundreds of zombies while Dead or Alive’s You Spin Me Round (Like a Record) plays in the background. One of my favourite sections was a TRON ripoff set in a zombie- infested arcade, where Juliet is sucked into several demonic versions of classic videogames like Pac-Man and Elevator Action.

You can also use a consumable item called a “Nick Ticket” to use Nick’s head to perform a random super attack of some kind. They’re funny and powerful, but unreliable. Also, the explanations of how to use them appear only once – so make sure you’re paying attention, because they don’t appear in the move list like all the other attacks. Once players have charged up a meter at the bottom of the screen, Juliet can enter Sparkle Hunting mode, which allows her to instantly decapitate any zombies in her range with a single swing, which makes getting those multiple beheadings a lot easier and also rewards her with more money and more platinum medals – which are used for buying the rarer items, like new, sexy outfits and concept art. B*Witched’s song Mickey plays during Sparkle Hunting mode, which I would normally find highly irritating, but it kind of suits the tone of the game here. 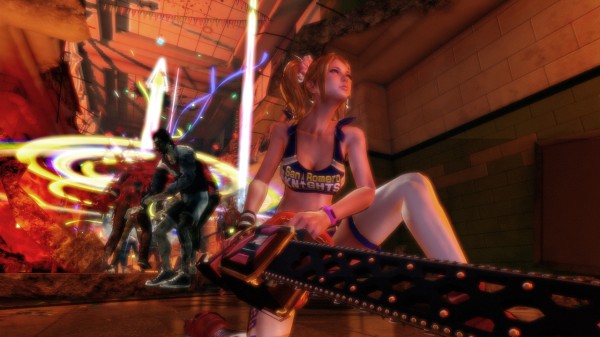 The bosses are really the highlights of the game. Turns out that the ringleaders of the zombie invasion are several powerful evil spirts taking the forms of zombies, each one themed on a different kind of music, like punk, funk, ’60s psychedelic hippie garbage, and even viking metal. Each boss requires a completely unique strategy to beat, and they all go through several different forms that have new attacks and patterns you have to figure out. They’re utterly hilarious too, especially their exchanges with Juliet and their mid-fight comments. Again, I wish I could tell you some of the best lines… but I can’t.

If you’re a zombie movie afficionado, there are plenty of zombie movie references and in-jokes to enjoy. For starters, the town Juliet lives in is called San Romero. She can also acquire the outfit of Ash from the Evil Dead movies, and she and her boyfriend voice their disapproval at something that caused a schism in the ranks of zombie fandom by saying, “Running zombies? Which idiot came up with that?” Oh, there are plenty more, believe me, some subtle, some right in your face. There are other cute little joke references you might notice – like the zombies in the arcade are all nerds who will attack you using Street Fighter moves. 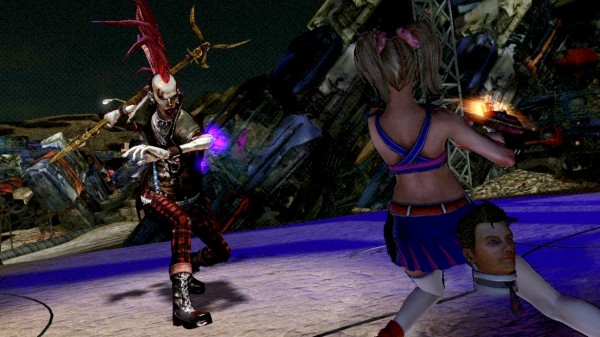 Every time you complete a stage in the story mode, it becomes unlocked in the ranked online leaderboard mode, where you get to play the same stages again, just with several conditions to meet and randomised zombie types and placements within them. Between stages, you can also go to Juliet’s house, where you can check out all the swag you’ve collected in the game, like the unique lollipops you’ve found, the concept art you’ve purchased, photos of the strong zombies you’ve beaten, and the different outfits you’ve unlocked for Juliet. You know, stuff for obsessive completionists.

With the music themed bosses, it would be kind of strange if Lollipop Chainsaw didn’t have a kick-ass soundtrack, which it does. My personal favourites are the heavy, ominous viking metal scores – and the cheesy, aforementioned You Spin Me Round from the ’80s. The graphics are pretty good and the cut-scenes are appropriately cheesy and B-grade in their direction. There are endless excuses for fan service, giving us a gratuitous Juliet crotch shot every five minutes – which she complains about, but really, with a skirt that short, it would be unavoidable even if she wasn’t jumping through the air and doing the splits and high kicks constantly. If you’re like me and you enjoy immersing yourself in the spirit of a game rather than just pressing buttons to see what can-like-to-happen, you’ll probably find that the fun factor makes up for a lot of the game’s shortcomings. 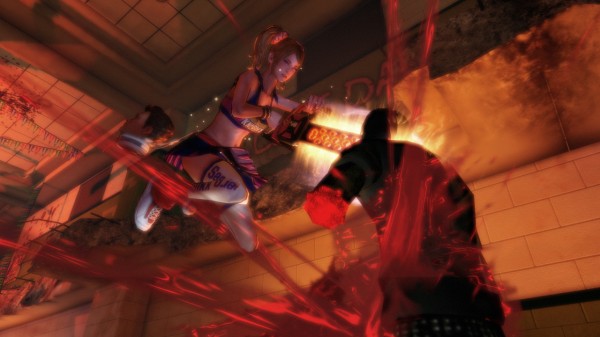 And now comes the bit where I try to wind down into a recommendation. It’s tricky in this case. Knowing the tastes of South African gamers as I do, I don’t think many of them have the imagination and appreciation of cult movies and underground culture to enable the silliness of the game to make up for its ropey and unpolished core combat. I reckon many copies of the game will find their way to the pre-played shelves after only a single play-through, if that.

Okay, how about this? If you love zombie movies and B-grade cinema, and you don’t mind a somewhat mediocre core game interspersed with really good bits, then you’ll definitely be able to enjoy Lollipop Chainsaw. If you’re a mindless press-button-stuff-happens type of gamer, then you’ll probably only get one decent play out of this. Choose carefully. 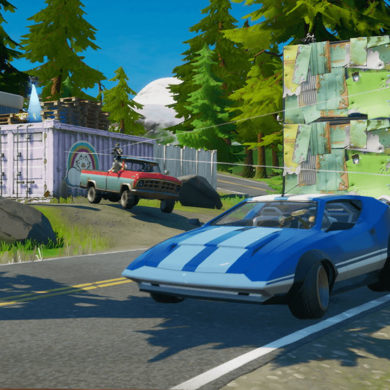