Microsoft’s recently announced Xbox One console is a bit of a strange one. On the one hand, it seamlessly captures the experience of an all-in-one home theatre device, merging TV *cough* American TV *cough* with gaming and other apps and functionality you’ve come to know and love from the existing Xbox Dashboard. But in the bid to have every console ship with Kinect and in order to extract as much profit from the device as possible, Microsoft has dumbed down the hardware somewhat. Still interested? Hit the jump for more info with high-resolution pictures taken by Wired. 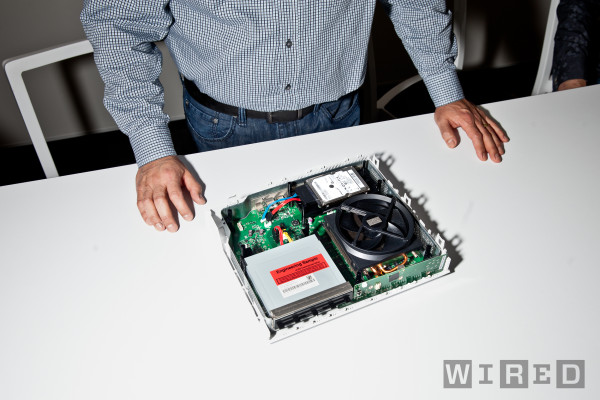 If you haven’t checked out the One yet, we have some coverage of the event over here and Tarryn’s discussion of it here (she didn’t get Alan Wake 2, sadly) and overall the feeling is very much a “Meh” from the industry and commenters. This isn’t the first time we’ve had a home theatre device attempt to be an all-in-one solution (helloe Smart TV) and we’ve seen consoles attempt to be more of a media center than a console (Sony’s PS3) but this is the first time anyone has actually tried to make one thing do everything else, including high-end gaming.

The One, or XO (hugs and kisses all round) is capable of interacting with various TV channels available in the US and can switch between your cable channels using voice commands or physical gestures. You can browse TV guides, chat on Skype, watch movies with an app snapped Windows 8-like to the side and, most importantly, you can play games.

But the hardware that drives this is the interesting part and that’s what we’re looking at now. 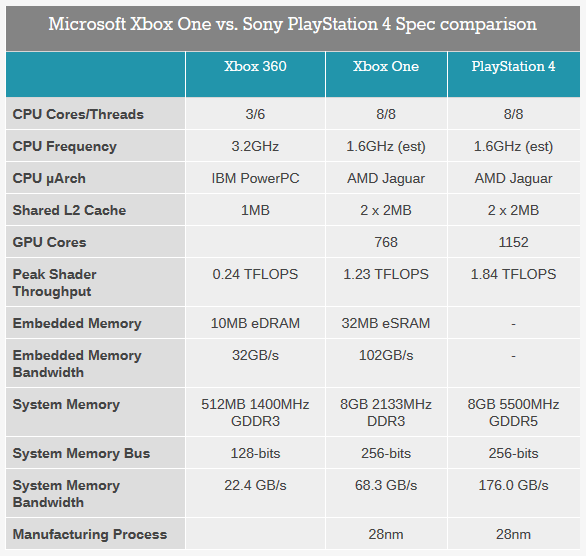 Comparing it to the original 360 is mind-blowing. The One is at least three times faster in some areas and as much as five times faster in terms of throughput. It has a stunning amount of memory and its a beast in terms if what it can do. But as Anandtech plainly laid out in their table, its clearly much slower than the PS4.

Perhaps “slow” isn’t the right word here but there is a performance deficit. Microsoft has opted to use the same processor, but has compromised on the memory and the GPU in order to drop the console to an appreciable lower manufacturing cost. On the CPU front its the equal of the PS4, which is great for multi-tasking and seamlessly switching between user interfaces. It also has eSRAM, a similar technology to eDRAM which enabled the Xbox 360 to add anti-aliasing to games without a performance deficit and to run at a generally more fluid frame rate because the eDRAM also acted as a buffer, storing completed frames before displaying them on screen.

The 32MB of eSRAM offers similar benefits but this time will likely act as a buffer for frames and in switching between the Windows OS and the Xbox OS without any lag. The memory is incredibly fast and rather expensive, but its inclusion in the 360 helped it make games look and run better.

Both consoles will be using custom versions of a GPU that AMD recently released – the HD7790. Codenamed Bonaire, the card is equipped with 896 shader cores, a 128-bit memory bus with 1GB of DDR5 memory running at 5GHz and boasts 96GB/s of bandwidth. It consists of fourteen shader modules with 64 shader cores each and it seems easy to scale up or down for different performance requirements. That means the XO uses twelve shader modules while the PS4 uses eighteen of them. In terms of hardware and throughput, on the GPU front the PS4 is literally 50% faster.

The memory makes the performance hit a bit more pronounced. The XO uses DDR3 memory at 2133MHz (dams as you’d get in a desktop) and lands up at 68.3GB/s. The PS4, using GDDR5 memory at 5.5GHz, sits at 176GB/s, two and a half times higher than the XO. The PS4 quite easily walks away with the performance crown and I’m sure the internet is abuzz with how “crappy” the XO is and how much better the Playstation will be.

But its not meant to be the PS4’s equal

We’re seeing the same argument held up here by Microsoft that AMD proclaimed to everyone last year – high-end performance simply isn’t their goal. With the PS4 its all about the gamers and the experience and in terms of hardware, it’ll last you a lot longer. With the Xbox One its a lot more of an ambitious ideal, marrying TV and gaming together with social networks, video communications and advanced physical control.

The event reveal was, admittedly, nothing much to do about gaming. There were a few reveals and announcements, but nothing that we couldn’t predict ourselves (unless you count that really weird, tech-demo-like trailer for Quantim Break). Microsoft’s pitching the console and its abilities to a wider market and its something they’ve never done before. Doing this at E3 would have been silly so it was a wise move to reveal the stuff the gamers don’t care about at a private event and show off the real meat at the biggest gaming expo of the year. You can’t fault them for making the right decision, whether you like it or not.

In closing, the Xbox One is a bit underwhelming. We knew for some time through leaks that it wouldn’t be the equal of the PS4 and those who called it first were right – its not running identical hardware. But that’s okay because it was Microsoft’s choice to do so in order to include Kinect into the final cost. Its actually possible in future that they may migrate to including more and faster hardware in the future with a refresh, but for now this is enough to drop most jaws. 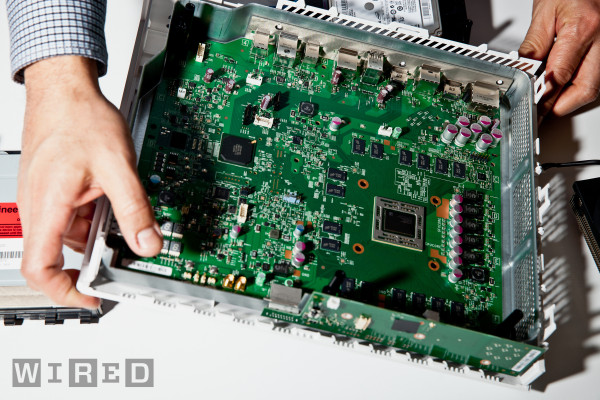 And just look at the inside. Its so clean! So neat. I love how its a simple, easy assembly, not the convoluted 22-step mess it was to take the original apart. I could take the XO apart with a blindfold on. User-level repairs and part replacements will be simple and I hope this extends to the PS4 as well. You can say what you want, but Microsoft does have some great designers working on their hardware and the XO is one of them.

What does this mean for Sony?

Well, it shouldn’t need to quake in its boots. For now the Xbox One’s touted features appear to only work in the US. Partnering with the cable companies that broadcast there is a smart move, but they’ll never be able to snatch up the rights to Supersport locally, not unless Microsoft somehow buys out Naspers (the DSTV and Mweb parent company) completely. At most, you’ll be able to use the switching and voice-activated controls to navigate between TV, games and other console features. And for this country, that’s fine.

As a media entertainment hub, though, it won’t have as much appeal. We still can’t stream from Hulu or Netflix without some workarounds and we won’t be able to get things like HBO and Fox either. Maybe Microsoft can and should approach TopTV for that opportunity, which would be interesting. As far as gaming goes, they’ll always have a loyal market of Xbox players, but the fact that you still have to buy a Xbox Live subscription may grate those of you already tired of the extra fees.

Don’t get me wrong, though – I’m just as excited about this as anyone and I’ll probably buy both consoles at some point in time. I just feel, that the PS4 is going to be the better deal, gaming-wise.

More things to read: Xbox One: your talking points for the next-gen console war; For those that missed it: Xbox One Reveal 2013 Highlights 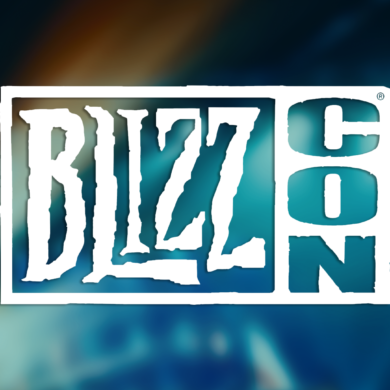