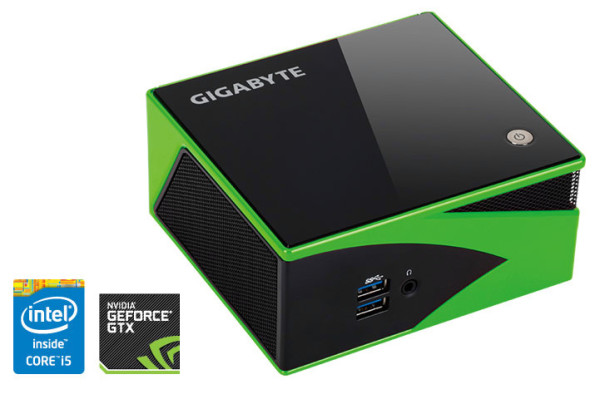 With all the various manufacturers who were jumping on the Steam Machines bandwagon now trying to hop off and do their own thing with bundling Windows 8.1 or doing barebones builds, it seems that there’s not much support mounting for SteamOS while it’s still in a beta sort-of phase. Gigabyte was one of the brands that would have supported it, but with Valve now putting their estimates to a 2015 launch for the release candidate of SteamOS, they’ve gone ahead and announced another barebones BRIX PC that is capable of some pretty serious gaming action, called the BRIX Gaming. Hit the jump to learn more.

The BRIX Gaming sitting before you is pretty close in design and port specs to the BRIX BXA8G-8890 Gaming, which was based entirely on AMD’s APU and graphics chips, with the exception that this is now a Intel and Nvidia combo. The BRIX Gaming is decked out in black and green and is really, really small – we’re talking a box that’s smaller than the ITX specification and which comes with a VESA mount to allow it to sit hidden behind your monitor. 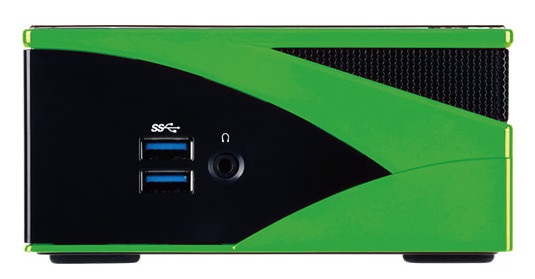 The BRIX Gaming features a Intel Core i5-4200H, which is a variant of the Core i5-4200M but more suited for desktop use as it packs in a higher TDP (thermal design power) set at 47W (as opposed to 37W for the i5-4200M). Clock speeds start at 2.8GHz and that boosts up to 3.4GHz under load. Considering that the processor is a dual-core Haswell chip with hyper-threading enabled, it’ll mostly stay at boost speeds provided that you’re not applying a GPU load as well.

The GPU is a Nvidia Geforce GTX760M, which is more equivalent to the desktop-bound Geforce GTX650 Ti. It has 768 CUDA cores, 64 texture units and 16 ROPS. Gigabyte outfits it with either 1.5GB or 3GB of GDDR5 memory, so performance won’t be anywhere close to what a GTX650 Ti could deliver because it’s been shoved into a much smaller chassis.

There is a definite change in display outputs on the BRIX Gaming compared to the BRIX BXA8G-8890 Gaming. Both systems have Gigabit ethernet as well as four USB 3.0 ports – two on the front, two on the back. The BRIX Gaming however has two mini-HDMI 1.4a ports and mini-Displayport 1.2, while the BXA8G-8890 Gaming only has HDMI 1.4a and Displayport 1.2. One of the extra ports is probably driven by the Intel HD graphics on the Core i5-4200H. Both systems are able to drive three monitors in a Surround/Eyefinity configuration when using a Displayport hub to break out the single on-board port to two monitors.

The BRIX Gaming has the advantage, however, of using just the on-board ports to do the same thing without needing a hub. Altogether, it’ll max out at five monitors natively, while the BXA8G-8890 Gaming caps out at four. Whether you’ll actually need that many displays on one of these systems is another story altogether. 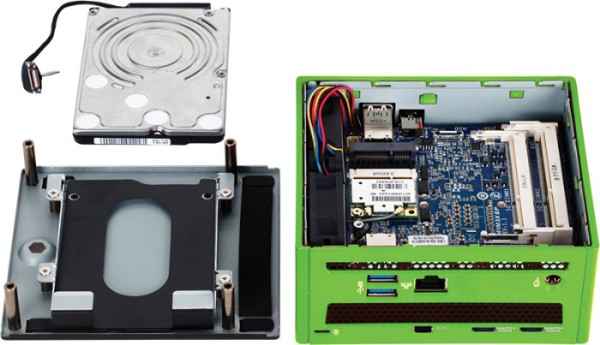 The BRIX Gaming caps out at 16GB of DDR3-1600MHz memory at 1.35v, has support for 802.11ac wireless networking together with Bluetooth 4.0 and has mSATA or SATA 6GB/s as potential storage options. There is also a mini PCI-Express 1x slot, but it’s sole use is for wireless NICs. Like the BXA8G-8890 Gaming, it also comes bundled with a 75-100mm VESA mount.

There will also be a version of the BRIX Gaming that sports a quad-core Core i7 processor along with the 3GB version of the GTX760M, launching in August 2014 for the US and EU markets. Gigabyte has not announced a EMEA launch date for either model. 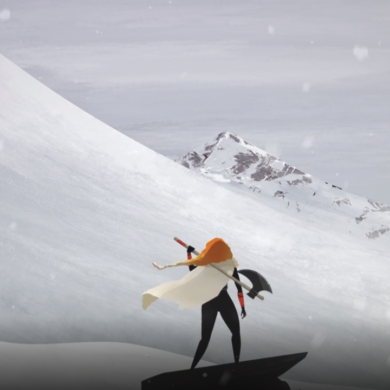