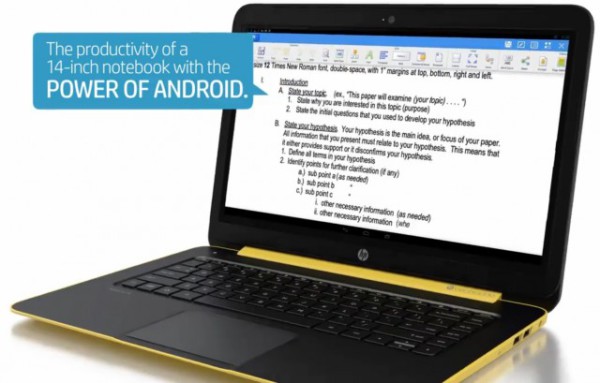 Hewlett-Packard is in a weird sort of limbo today, dancing between Android and Windows platforms like they’re a bunch of hot coals. Although they have a number of interesting products in the form of the Android-powered Slate 7, the Lenovo Yoga-like Pavilion X360 and the insanely priced Spectre 13 X2 (still without a proper digitiser), it’s about to get a whole lot weirder now with the premium-priced Slate 14, a notebook powered by Nvidia’s Tegra hardware and Android 4.3 Jelly Bean. Wut?

The internet first got a look at the Slatebook 14 back in June just before Computex Taipei. The design is pretty sharp and I’m personally digging the yellow chassis. The display is a matte 14-inch 1080p TN panel resulting in pixel density of 157 PPI. That’s a lot crisper than most 720p panels of the same size and there’s definitely a lot more room to display things as well. It ships with Android 4.3, but there will be updates to 4.4 and eventually to Android L, which to be honest is beginning to look a lot like Apple’s OS X Yosemite UI and iOS 8. 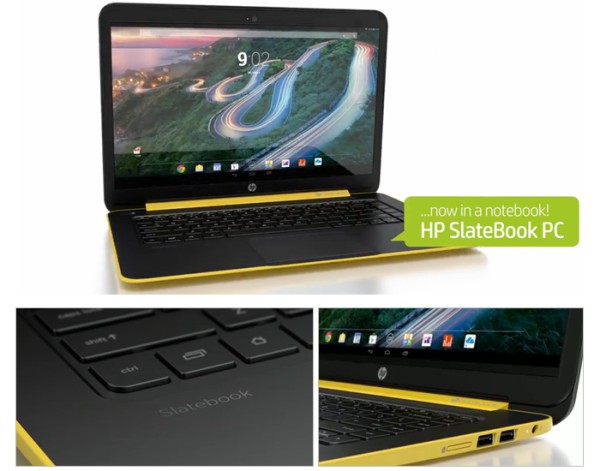 The hardware inside is a quad-core Nvidia Tegra 4 chipset running at 1.9GHz, complimented by 72 CUDA cores that are more similar to Nvidia’s pre-Fermi architecture. For a more direct comparision, it’s closer to the same GPU hardware inside the Playstation 3, having separate pixel and vertex shaders instead of the more common unified shader design seen in Fermi, Kepler and Maxwell. The chip is backed up by 2GB of DDR3-1333LP memory and 16GB of eMMC storage. There’s no optional hard drive, although one could shove a 128GB SD card into the SD slot for extra space.

802.11n and Bluetooth comes integrated and because it’s the Tegra 4 chipset and not Tegra 4i, LTE isn’t included. HP includes Beats audio speakers, one USB 3.0 and two 2.0 ports, a full-sized HDMI 1.4a port and a 3.5mm audio jack. In the promotional pictures there is a SIM slot next to the two USB 2.0 ports, so it’s possible that HP could ship a later version that packs in 3G/LTE connectivity for a higher price.

It weighs 1.68kg and is rated for a battery life up to nine hours. This may be the first legitimate attempt to make Android work properly as a replacement to Windows. There have been other hybrid tablets before and at least one netbook (here’s Lenovo’s version) that was stuck on Ice Cream Sandwich. The asking price of US $429 is a bit much, considering that Chromebooks regularly dip into the $200 range.

HP may be unable to move as much stock as they would like given that Microsoft wants to ship Windows 8 with Bing for a much cheaper price on smaller devices, with notebooks and tablets smaller than nine inches diagonal will receive it for free. I wonder how long it’ll be before someone figures out how to get Linux on to there. Until then, maybe someone can figure out if Nvidia Gamestream works on it. 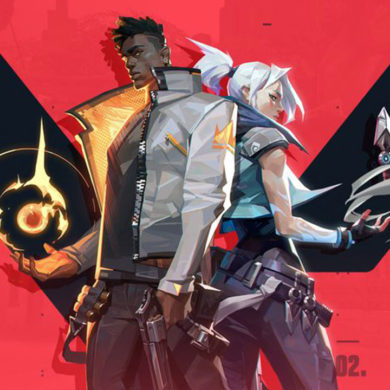