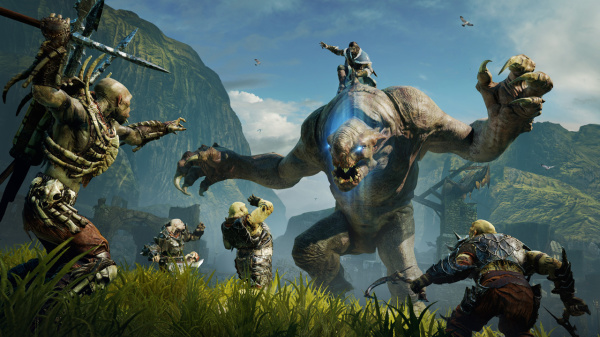 Middle-earth: Shadow of Mordor one was probably an easy sell for some people. An open-ended action game set in Tolkien’s Middle-earth in which you play a revenge-driven ranger imbued with dark powers – my debit card practically swiped itself and the game jumped unbidden into my pants… pocket. My pants pocket.

But many things sound good on paper, or on the Internet, and I’m re-learning quite quickly not to get dangerously excited about upcoming games anymore. So now that it’s finally here, let’s take a look at it. The paragraph above roughly sums up my total knowledge of the game before I popped it into my PS4. I think I also knew it had something to do with assassinating Uruk-hai generals, but that’s it.

The premise is quite simple. Players take on the role of Talion, a ranger whose wife and son are murdered shortly before he is. Luckily for him, he is somehow resurrected and linked to the ghost of an ancient elf lord named Celebrimbor – who is apparently some kind of bigwig in Tolkien’s mythology, but I’m not that much of a Middle-earth buff, so the effect of the reveal was probably somewhat lost on me. Anyway, this ghost suggests that, since they’re stuck with each other, they may as well seek their vengeance together. 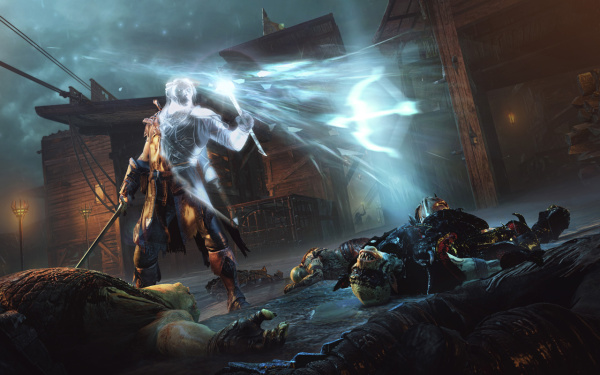 After that, the game literally plonks you down in a section of Mordor with no real objective or even a gentle nudge in the right direction. Don’t get me wrong, I liked it. I wish more games kicked off so openly – I just wasn’t expecting it. Of course, being an open-world game, it’s littered with icons representing missions and activities. Your first order of business to gain a sense of purpose and security is to head to a few icons representing the main story missions, most of which act as tutorials for the basic flow of gameplay and the abilities you’ll slowly acquire over the course of the game.

The basic idea goes like this: Talion’s ultimate goal is to exact revenge on the Black Hand of Sauron (the guy who murdered him and his family), and in order to do this he must create enough of a mess to draw him out. This is achieved by killing enough of Sauron’s Uruk warchiefs to get his attention. Initially it’s a case of tracking them down and killing them one by one, but later it becomes apparent that Talion can’t do it on his own. Luckily his ghost pal Celebrimbor has the ability to control the minds of enemies through branding, which will enable Talion to create his own army and seed the ranks of Sauron’s forces with sleeper agents who will turn on their fellows at his command, which is quite fun to do.

Those are the two main phases of the game – the “just kill them all phase”, and the “no wait, better idea – let’s make them our allies” phase. Both phases work more or less the same way. You gather intel on Uruk leaders, and then dispatch them to grow your power. For instance, Talion can use his special ghost vision to identify Uruk “worms”. These guys have intel. What you need to do is grab them – preferably when they’re alone, because it can be quite tough to do in the middle of combat – and psychically interrogate them to get info about a single enemy of your choice. This will reveal their name, location and a list of their strengths and weaknesses, which you can use to plan how to kill them. It’s also possible to blunder into these captains without knowing their strengths and weaknesses, which makes for interesting encounters. 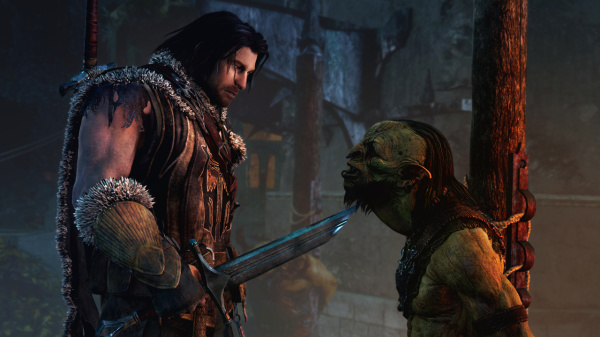 For example, I came across a captain who was immune to stealth kills, immune to melee damage and immune to ranged damage – but had a crippling fear of warg-like beasts called caragors. I couldn’t damage him at all under normal circumstances. So my options were to either lure caragors to the area with bait, or wrangle one and ride it into battle myself.

I went with the second option, and it was quite amusing to see this formerly unbeatable enemy tripping over himself to get away from my sabre-toothed steed, dropping his defenses entirely. So, after chasing him all over the camp like we were on The Benny Hill Show, I finally got him. I think. I don’t actually recall damaging him enough to kill him. It looked like he died of fright. Not exactly what I had in mind, but oh well.

Shadow of Mordor is one of the most organic and unpredictable games I’ve played in ages. You see, in addition to the havoc you wreak, the Uruk captains and warchiefs engage in their own conflicts and power struggles. They might duel with and kill one another, rising and falling in rank without your input. For the first half of the game, you probably won’t care – but once you gain the ability to brand Uruks, and are trying to ensure the ones you control advance through the ranks, their petty squabbles suddenly become intensely interesting. You’ll definitely want to intrude on duels and eliminate their rivals to ensure that your saboteur stays alive to reach the top. 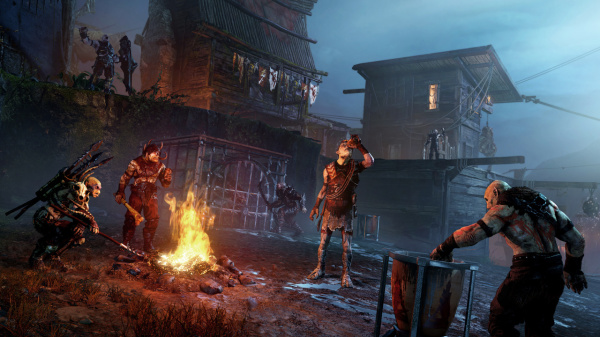 Oh, and that Uruk captain I thought I’d killed with the caragor? Well, I was just wandering around, looking for collectibles and side missions, when I blundered into him again. He taunted me with the fact that he’d survived, and that I was now going to die. After my initial WTF reaction, all I could do was leg it out of there, since there weren’t any caragors handy. It’s just another example of the interesting, organic nature of the game.

That’s the meat of it, assassinating captains and warchiefs and meddling in their power hierarchy, but there are also side-quests littered all over the map. Everything from stealth missions to archery challenges to brawls against hundreds of opponents. These reward you with experience and currency used to upgrade Talion’s abilities and gear. Talion has two skill trees, one for his combat and stealth skills, and the other for his archery and wraith skills. You can acquire every ability eventually, so it’s really just a case of deciding which ones you want first.

The melee combat works almost exactly the same as in Batman: Arkham Asylum and company, right down to the button combinations. Talion can strike, dodge, stun and counter enemies, and if he successfully lands enough strikes without getting hit, his sword will glow blue and allow him to perform a special attack. There are several abilities you can unlock to make Talion a more powerful fighter. 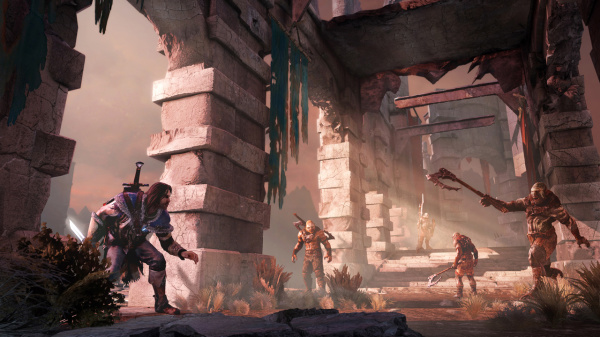 The stealth is most reminiscent of Assassin’s Creed, albeit with much simpler climbing mechanics. Talion can sneak up behind enemies and stab them, or he can pounce on them from above. You can also lure single enemies away from crowds and my personal favourite is the ability to perform an unnecessarily brutal stealth kill that will scare other enemies and send them running in terror.

In addition to this, as Talion defeats captains and warchiefs, he’ll earn runes. These are randomly generated buffs he can socket into his sword, dagger and bow that grant him benefits like a chance to recover health on a stealth kill, or a chance to recover his bow energy on a headshot. There’s something about these that I don’t like. Firstly, only a handful of the most rare ones seem at all useful, and secondly, I don’t much care for a 30% chance to regain five health on a critical strike. What good is that? You may as well not bother. 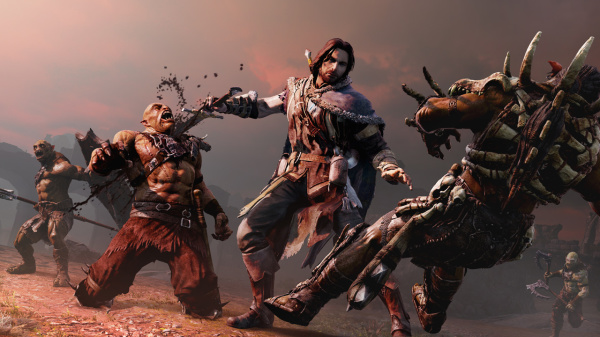 And that’s pretty much it. The story is moderately interesting if you’re inclined to pay attention, especially when Talion and his ghost pal start exhibiting conflicts of interest – but it never really amounts to much and the ending is lacklustre. That’s the problem when making a story to fit into an existing one – you can’t have anything too earth-shattering happen lest it screw up the canon for the uber-fans.

If you’re in the market for a solid, entertaining open-world action game with shades of Assassin’s Creed and the Arkham games in it, and a surprisingly gripping and organic core mechanic built around assassinating and subverting military leaders, Shadow of Mordor is well worth a look. 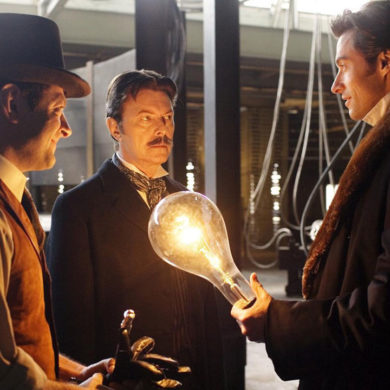