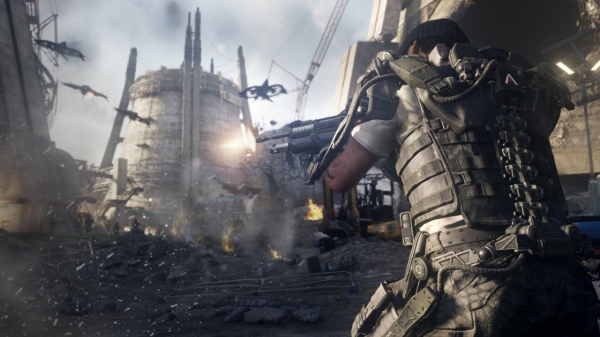 They’ve done a stellar job in injecting new life into the annualised series. What’s even more admirable is that they’ve made it their own, adding fundamental changes to tried and tested CoD formulae resulting in one of the more memorable Call of Duty titles since 2007’s original Modern Warfare.

While Sledgehammer has indeed set the bar high for 2015’s version, Advanced Warfare is not without some oddities and irritations, especially on the PC version we used for this review. 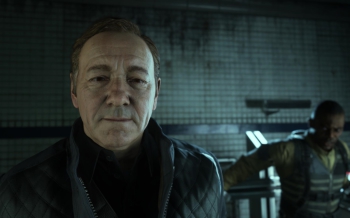 Yes, yes, nobody plays Call of Duty for the single-player anymore, right? Wrong. This is a Call of Duty campaign with highpoints and set pieces as memorable as those found in the first two Modern Warfare games, and the best part about it is that it still would’ve been a great campaign even without Kevin Spacey. Spacey has a powerful role in the plotline and does add to the overall experience, but the campaign does not lean on his A-list celebrity status in order to keep your attention. Long-time voice actor Troy Baker (Booker in BioShock Infinite and Joel in The Last of Us) does a good job of creating one of the more memorable Call of Duty player characters; however I do feel that he could have done with some more screen time. Still, cut-scenes play out well, and the digital acting and voice-overs are utterly stunning and convincing nearly every time.

Sledgehammer has also done the seemingly impossible by creating a small cast of Call of Duty characters that actually have presence. Aside from Modern Warfare’s Captain Price, I cannot recall any Call of Duty characters that made a lasting impression. Advanced Warfare has the strongest showing of characters by a landslide, which yes, is probably not that difficult considering predecessors, but it at least speaks to the impact some fresh development blood can have on a franchise that has altogether abandoned meaningful single-player for multiplayer.

Set in the 2054, the player character of Private Jack Mitchell finds himself recruited by the Atlas Corporation after being severely injured in a US Marine campaign in North Korea. Atlas is a sort of world police (one that would make Team America proud) that flits across the globe “getting things done” where government policy and bureaucracy has failed. Their shining achievement is the complete turnaround of Baghdad, which is presented as a type of Dubai-like utopia of high tech prosperity; it’s a neat narrative device that underlines Atlas’ ability 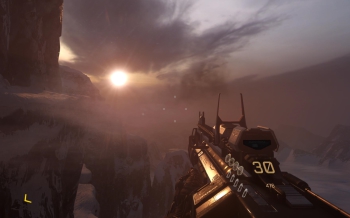 to fix the world’s problems. Naturally, things eventually go pear shaped, and Mitchell and the rest of his Atlas buddies find themselves on the wrong side of company CEO Jonathan Irons (Kevin Spacey).

In a lot of ways the plot is a standard Call of Duty affair, but its presentation, varied missions and memorable set pieces are what makes it destined to be remembered fondly. I had a blast playing through the single-player campaign; one mission in particular that’s set on the Greek resort island of Santorini will go down as one of my gaming highlights of 2014. Advanced Warfare’s 15 missions last around six hours, but unlike every other Call of Duty campaign that I’ve played, I kind of want to play through Advanced Warfare’s again because it really is heaps of fun. That fun is largely thanks to the future tech and science-fiction-like weaponry. The Exo suit provides you with double-jump and dash movement sets in addition to a suite of Exo abilities ranging from deployable riot shields, to hover packs. I did, however, find myself hardly using the Exo Abilities during the campaign unless I was prompted to do so to make it through sections of levels that had been designed to work in tandem with particular Exo capabilities.

In between missions you get to unlock a variety of Exo upgrades using upgrade points acquired via fulfilling specific challenges. Headshots, kills, grenade kills, and recovered intel all count towards earning you upgrade points. Exo upgrades include things like faster reload speeds, greater sprint time, extra grenade slots and so on. In total there are 22 upgrades spread across 11 different abilities. 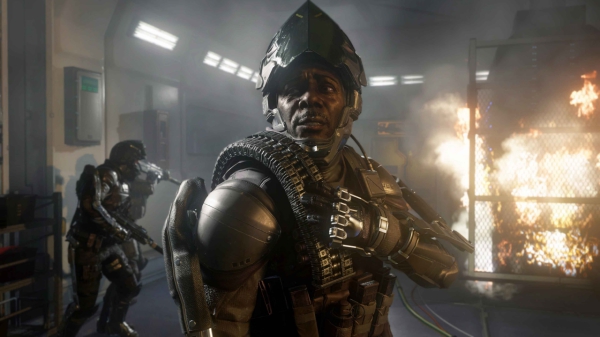 Advanced Warfare is a good-looking game – a very, very good-looking game. In fact, it makes other contemporary shooters (including the still impressive Battlefield 4) look a little dull. Lighting and reflective surfaces are incredible; the texture details are unbelievable; I really cannot emphasise enough how great this game looks on PC. The stunning visuals come with a caveat however: configuring PC graphics settings is a chore in Advanced Warfare. There’s no way to adjust settings before actually starting a game, which means you need to sit through a very long loading screen (I timed it at two minutes and 30 seconds) before you can hit the escape key to change your graphics settings. Once you’ve made any alterations the game reloads in its entirety, which means sitting through another lengthy loading session and the same introductory cut-scene. I’d watched the campaign’s intro no less than 10 times before I’d managed to strike the correct balance between frame rate and visual fidelity. It took me more than half an hour to get this right, which highlighted just how stupid the PC configuration system is for single-player. Yes, the multiplayer and single-player portions are split between two Steam executables, but for some reason the multiplayer portion allows you to configure your graphics settings directly from the main menu. It’s a bizarre and frustrating system, and one that needs to be fixed in a future patch. 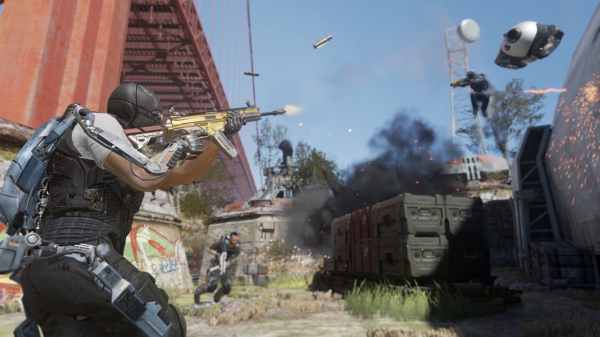 It’s all about the multiplayer anyway

And here in lies the biggest issue with Advanced Warfare on PC: dedicated servers. According to a recent announcement by Activision, the game is using “listen servers as part of our proprietary matchmaking system”. Basically, there are no “true” dedicated servers, and the so-called “listen servers” (read: essentially a peer-to-peer system) proved to be less than ideal for me on PC. I invariably found myself sitting in empty game lobbies hoping that seven other saps wanted to play the same game mode I did. Let’s take Hardpoint for example: the game mode is a returning mode from a previous Call of Duty title and is terrific amounts of fun. I played this game mode when I attended the Advanced Warfare multiplayer premier in Germany back in August. Was I able to play Hardpoint during my review time with the game? No, not at all. Nobody seems to want to play Hardpoint, which means you’ll never get past waiting in a Hardpoint lobby that has you as the only player. The same goes for game modes like Uplink, which is basically a futuristic basketball, but with guns. Again, I played this at the August event and had great fun, but could never find an active game to join during my review session.

The staple game modes of team deathmatch and free-for-all continue to have lobbies that are almost always populated by other players. Both of these multiplayer modes were literally the only game modes (out of 11 in total!) that I was able to play. This is an unfathomable setback that has resulted in me being unable to recommend the PC version of Advanced Warfare. I know that the Xbox One and PlayStation 4 versions of the game have no matchmaking issues presumably thanks to the much larger player-base; if you want to play Advanced Warfare for the multiplayer then there’s really no other choice than picking it up on console. Xbox LIVE has always been the home of Call of Duty multiplayer, and the poor performance of multiplayer on PC just serves to highlight this fact.

What was playable was still good fun. Outfitting your Operator with the myriad Supply Drop items becomes pretty addictive. Sledgehammer’s “virtual lobby” is also a nice touch as it basically allows you to look at other players’ Operator models while the match loads. It’s a nice way to show off your loot unlocks and see just how robust the character customisation is. Initially the player customisation seems rather sparse (male Operators have 12 predefined base characters and female Operators have five – an imbalance I found odd), but once you start hitting populated lobbies you begin to see some truly unique looking characters thanks to the tons of equipment that can be unlocked. 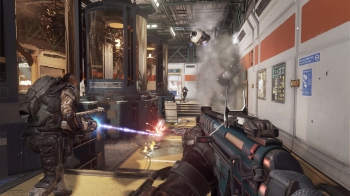 Advanced Warfare uses the Pick 13 system when it comes to choosing weapons and equipment. You have 13 slots to fill with a primary and secondary weapon, weapon attachments, Exo suit abilities, Perks, Killstreak awards (which can now be individually modified) and grenade types. You also get Wildcard slots which alter your Pick 13 limitations resulting in even more customisation options. It’s a great system that made its debut in Black Ops II, albeit as the Pick 10 system.

Advanced Warfare ships with 13 multiplayer maps, with the promise of a further four map packs to be released via DLC. Some of the maps go through changes midway through matches, such as Recovery’s volcanic activity that forces players into a new section of the map to avoid the eruption. Others, like Ascension, have security systems that can be activated to take out opposing team members. They’re fun distraction for the first time, but the dynamic maps don’t provide fundamental changes to the way multiplayer works. Any changes to the standard Call of Duty multiplayer can be found in the Exo suit movement sets.

Exo Survival mode is Advanced Warfare’s “horde” mode. Up to four players can team up to take on 50 waves of increasingly tricky enemies. It’s a fun distraction that close groups of friends will likely enjoy, and hey, this co-operative multiplayer mode works. I had no issues finding games to join so there’s at least that.

Call of Duty: Advanced Warfare gets a lot of things right. The campaign is heaps of fun, the graphics and art direction are incredible, and the sound design is impeccable with futuristic weapons having audible kicks as you pull the triggers. Sledgehammer really has done a fantastic job in creating a thrilling sub-series in Advanced Warfare and one that I hope we’ll see more of like we did with Modern Warfare and Black Ops. It is unfortunate that the broken multiplayer lobbies detract so much from the overall experience. A Call of Duty’s longevity rides on its multiplayer modes, and as amazing as the campaign was, there’s no getting over being able to find matches for less than 20% of the multiplayer modes on offer. 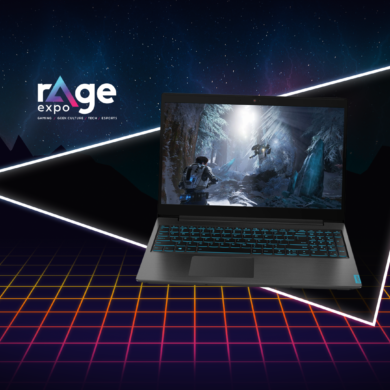