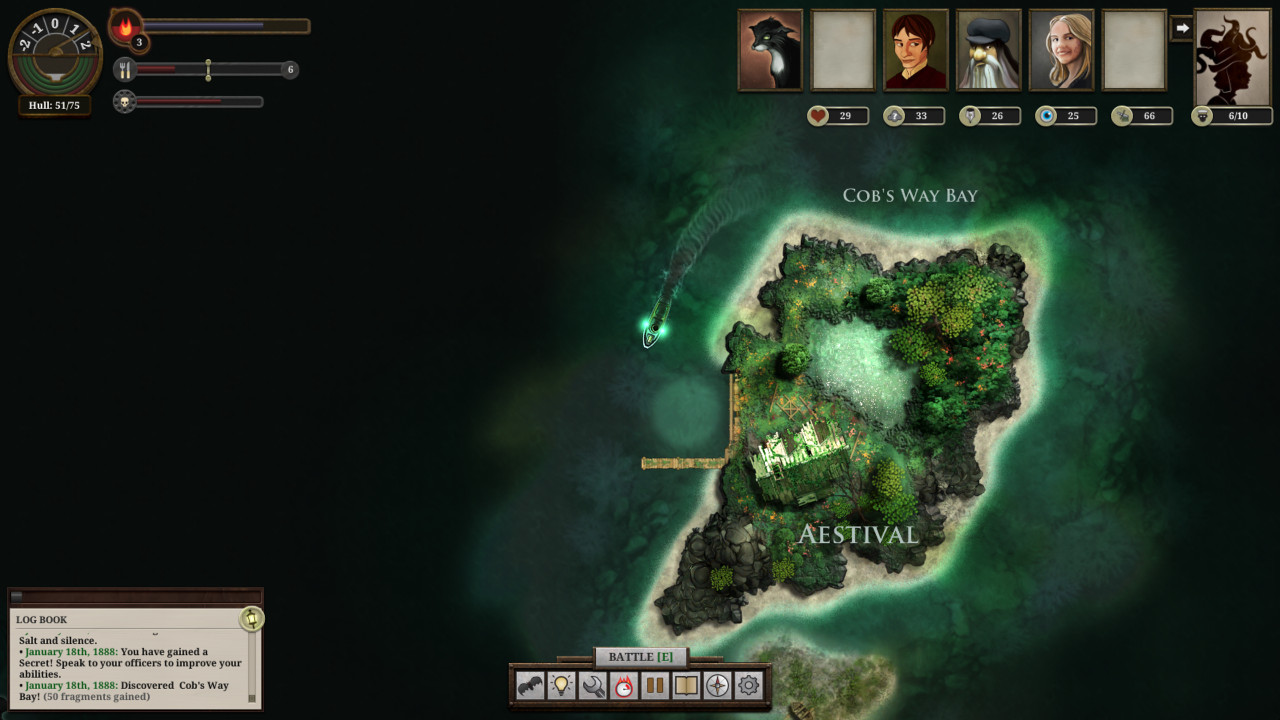 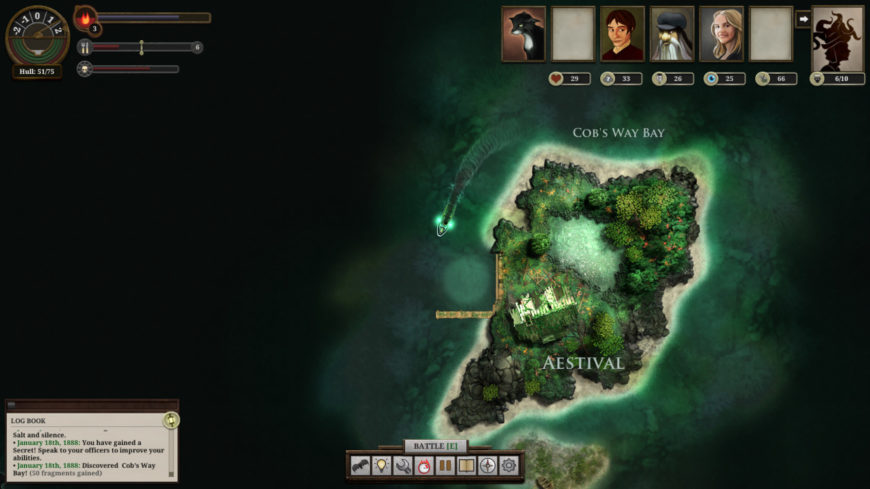 Have you ever wished you could drift, fuel-less and food-less, through the Stygian waters of an underground ocean, watching helplessly as your crew start to cannibalise one another and turn mad in the darkness while feral horrors claw at the hull? Of course you have.*

And you’d be in luck: your necrotic itch can be amply scratched with a curious game by the name of Sunless Sea. Made by those lovable scamps over at Failbetter Games, Sunless Sea is a sorta-roguelike-like-ish (yeah, I said that) work of interactive fiction that is set in the world of older sibling Fallen London. If you, by dilly dally, have not played Fallen London, then here, contextify yourself with Failbetter’s synopsis: “Thirty years ago, London was stolen. Now it rests on the shore of the Unterzee, that old dark ocean under the world. Hell is close, immortality is cheap, and the screaming has largely stopped…”

While Fallen London unfolds in its namesake, Sunless Sea wades predominantly through the harrowing chthonic [You’d better take this. – Ed.] water mass that is the Unterzee. The premise is simple, me ol’ chuckaboo, but ripe with malign promise: choose your backstory, pick a goal and, well, get your drift on in that great benthic [And this, just to be safe. – Ed.] bellyful of water.

Right off the chimney: Sunless Sea outright nails exploration. This is a dark game, both literally and figuratively, and it’s wondrously varied. My little boat looks so vulnerable, so fragile, so lonely, as it putters along through the reverberating evernight. For a mosaic of reasons, getting far away from home feels like the risky, untethered thing that it is. Every new landmass I sight draws me into a maelstrom of thoughts: Can I trade with them? Do they have fuel? Oh God, I’m running out of food and my crew are starting to eye one another with more than shall we say fraternal affection.

But most of all: who are all these off-cut people living on this island full of spiders, or these monks who like to get drunk on mushroom wine? Who should I help in this anthropomorphic civil war over the Bright Shiny MacGuffin? What’s the deal with the zombie-like colony of Venderbight? 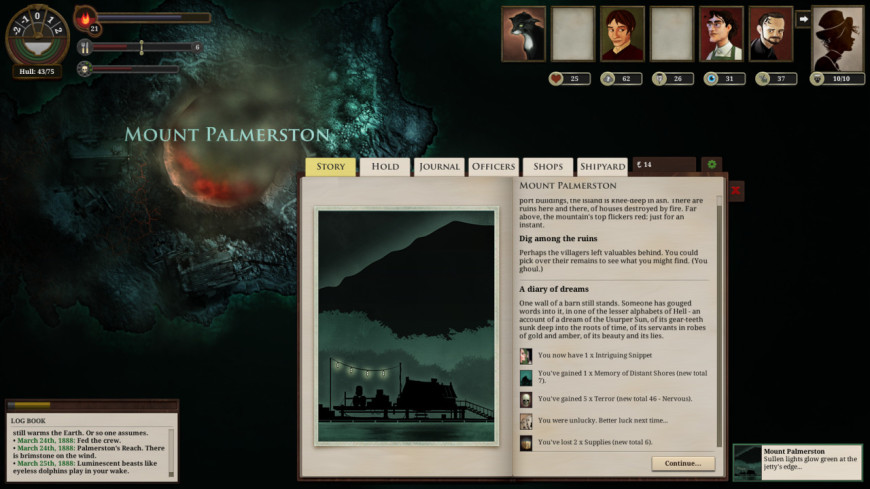 Every place you visit has a ramshackle, ingrown story, and each will offer you a suitably twisted plot arc should you poke about. So will your ship’s officers, for that matter. It’s fiercely good stuff: the plot and the world alone are compelling as hell, but when you skin it over in Failbetter’s extraordinary words, well, just… well. It’s for reals among the best writing I’ve encountered in or out of a game – and I’m one of those bitter, implacable souls who is seldom satisfied with the words I read (and write, for that matter). The narrative, positioning itself right in the depths of the uncanny, says enough and leaves enough unsaid to be top-notch eerie.

The tale meat (sorry) of the game is presented on a Unity-ported variant of Failbetter’s own StoryNexus engine, which can best be described as a hellishly sexified choose-your-own-adventure system. It’s well-designed, to be sure, though I do find it annoying that the game announces possible choices when I don’t have – and have no reason to know of – the means to unlock them. It feels a bit spoiler-y, and it snaps me out of my sense of immersion.

Still, my irritation feels a spot petty, considering the sheer quantity of wordage in this title. Based on a quote I lifted from the game’s FAQ, utterly bare of context: “There are about a quarter of a million words in Sunless Sea, and we’re still periodically adding more.” For scale, that’s a little under half of War and Peace.

There is a game underlying this all, and its resource-based mechanics are largely sound. A re-skin of your general RPG stat system affects how you handle things like combat and special encounters. It works just fine. Most of your time, though, will be spent fretting over the three Fs of subterranean sailing: fuel, food and fear. It’s these that develop the ebb and flow of the tension in Sunless Sea, and they interlock well with the touchpoints of the plot. Many are the thank-God moments in this game – those moments that make your own story in this world unique and compelling – and that’s mainly thanks to these horrorsome meters. 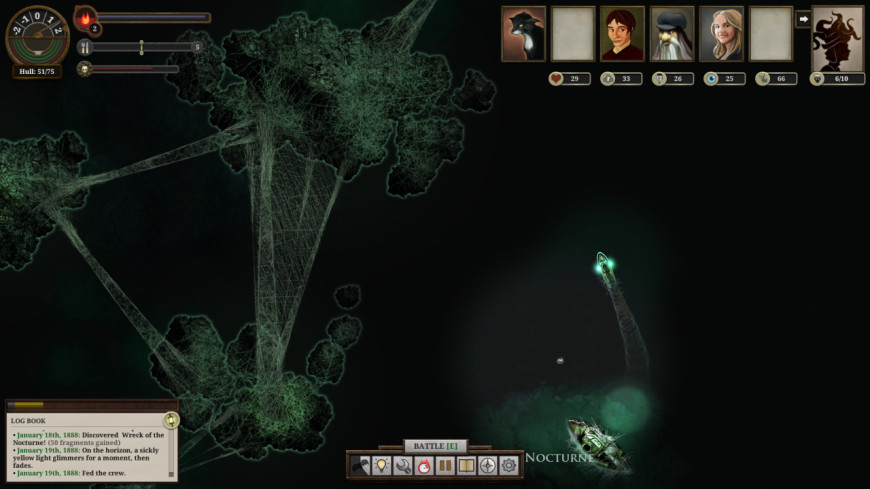 The anxiety that underwrites these moments gathers much of its tensile strength from Sunless Sea’s oh-so-very roguelike permadeath, which is a bit of a sticking point for me. Death here is permanent in a Rogue Legacy-ish sense more than, say, a NetHack-ian one, in that you can carry over some of your achievements through a bequeathment system. It doesn’t really work for me, though. Permadeath is a fantastic feature in the right context: the threat of irrevocable catastrophe quickens every decision with the sort of meaning that can only arise from mortality. But to be effective, permadeath requires gameplay to have sufficient randomness. That means plenty of randomness. Too much randomness for a game so bound to a developer-laid story as Sunless Sea, as procedurally generated as it is.

Without this randomness, permadeath is a punishment with too much magnitude, because it subjects you to too much repetition. In a game with tremendously challenging basic systems like Dark Souls, repetition is intentional and necessary. But in games with simpler mechanics that have not been designed with repetition in mind, it’s the literal hot-damn worst.

Thankfully, Sunless Sea allows you to play without permadeath, and I recommend you do this. There you go.

In the end, the “game-y” part of this game is an interesting case: in any other setting, it would feel ponderous and cumbersome. Indeed, it is ponderous and cumbersome, but that’s kinda the whole point. Sunless Sea would not be the same experience otherwise – its mechanics amplify its mood perfectly. This is a deeply contemplative game, and verily, it feels contemplative by virtue of the fact that the play has not been so tightly engineered. 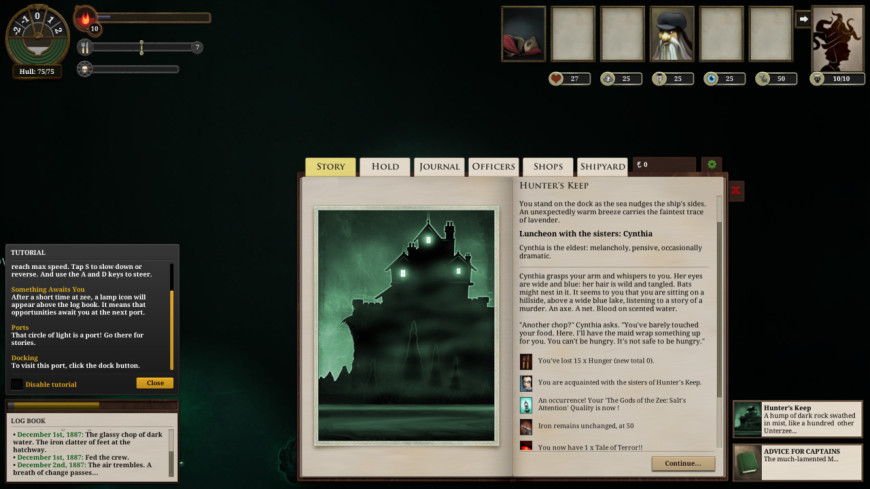 It all comes together, is what I’m gisting at. It comes together in this brokenly grand way that feels – well, it feels a little magical. It comes together enough, in fact, that I’m willing to call it something of a rough masterpiece. Aye, it has a few barnacles on its hull, but truly, they vanish beneath the sprawling magnitude of its poetic ramble. It’s magnificently twisted, and exquisitely told. Truthfully, I’m sort of in love with it, and with what it represents. So much so that I’m refusing to give it a score.

Because it’s better than a score.

*In the unlikely event that your answer was, “By the heaving bosom of Bartolomeu, Rogan, NO,” here is a video of a tiny weasel on a play date with a set of Eeyore plushies. You’re welcome.