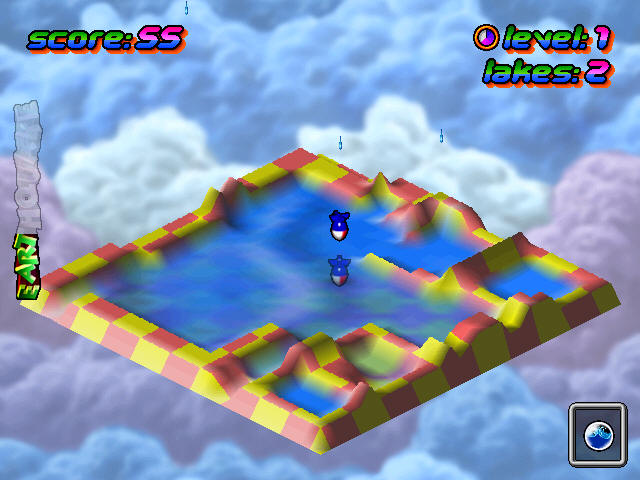 One of the best things to come from behind the Iron Curtain was the glorious Russian game Tetris. At some point or another, most gamers have cut their teeth on the fabulous-yet-futile puzzler, mastering the art of twisting and turning those fiendish pieces with nary a second’s grace. It’s earned its recognition in the hallowed halls of gaming, and like many of its ilk, it’s spawned a seemingly endless legion of clones. Most are unremarkable, but occasionally something comes along that adds an interesting and refreshing twist to the genre, and if you haven’t already guessed it, one such title is Wetrix.

Trix of the trade

The game is a variation on the “falling pieces” theme: things slowly descend towards a board and players must make split-second decisions on how best to place them. Said pieces are infinite and it’s only a matter of time before you’re overwhelmed and have to call it quits. The twist here is that the playing board is isometric and incorporates a very primitive degree of three-dimensional thinking. Most significantly, players have to contain water within their design and prevent it from spilling over the sides of the playing field. 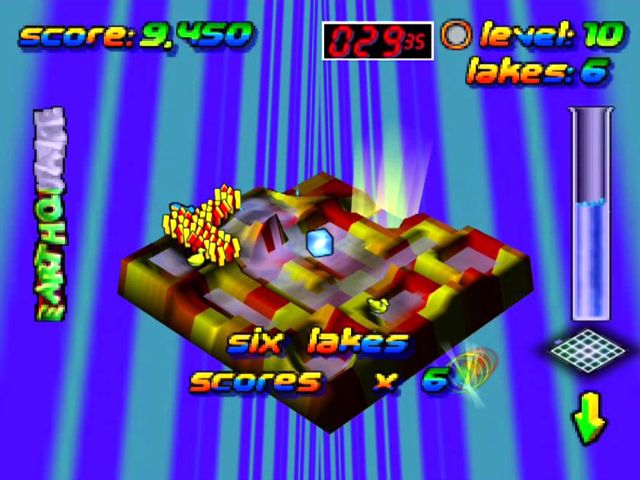 Your aquatic task is accomplished by forming perimeters into which water can be collected. Certain falling pieces will cause the board’s shape to grow and shrink, rise and erode. Just when you think you have all your water under control in neat little lakes, another piece will appear that will force you to rethink your structure. As if that’s not bad enough, you’ll have to deal with ice cubes and meteors which will freeze and thaw/evaporate the lakes respectively. Most damaging of all are bombs, which can quickly turn the playing field into Swiss cheese and ruin your plans completely.

There’s a drain on the right which shows how much water has been spilled. If it goes too high, it’s game over for you. To make matters worse, there’s also an “earthquake” meter which fills according to how much land you’ve raised. Let it get too high and your precious playing board rumbles and quakes, spilling water with reckless abandon and almost certainly guaranteeing an end to your game. Balancing your water and quake levels is a never-ending, nigh-impossible task, but it’s as goofy and addictive as anything you’ve ever experienced. 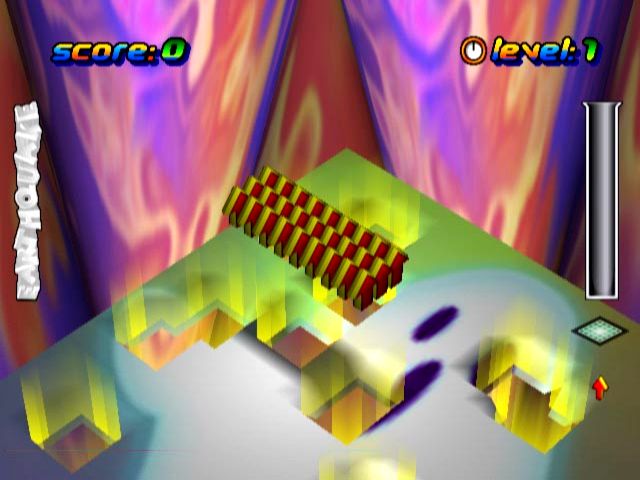 The game appeared in several incarnations on various systems, including the PC and Nintendo 64. These ports differ in their modes, camera usage and soundtrack, but the general consensus is that the best overall version is for SEGA’s Dreamcast, titled Wetrix+. It’s actually an enhanced remake which includes the best of all the ports, including the superior soundtrack that featured on the PC. Getting yourself a copy these days will be tricky, but Amazon and eBay seem to be your best bet for second-hand goodness. Either way, it’s definitely something to experience, with its wacky graphics, silly physics and… rubber duckies. Yes, really.