What exactly is Bethesda.net, and should we want it?

Last night, as we were making our way to bed during a scheduled load shedding period, I remarked to Matthew, my brother, that it would be really funny if Bethesda did a “me-too!” sort of thing by announcing their own game client or game portal. After all, just about everyone else has something similar – Sony does it with the Playstation app and Playstation Blog, 343 Studios does it with the Halo app for Xbox and Rockstar uses Social Club for their games, their announcements, as well as sharing player-created content like videos made using the GTA V PC video editor. And that’s ultimately what I think Bethesda.net will become – a compilation of all the good ideas that other companies make use of right now in one landing page, but tuned specifically for Bethesda’s needs.

Speaking to a captive audience just awoken from seeing brand spanking new gameplay footage of DOOM, Pete Hines introduced Bethesda.net and spoke about the philosophy behind the company’s decision to go this route:

“You heard us talk about DOOM Snapmap, a great example of how Bethesda and its studios give our fans the ability to create and share mod content regardless of platform. Supporting mods is just one of the ways in which Bethesda is pushing the boundaries of what is possible in games. Over the last year we’ve been working on hoe to expand how gamers create and share that content to our communities, how they connect… both to each other as well as to us. The result of that work is a new digital platform and its called Bethesda.net. This is a home for all things Bethesda.

Bethesda.net will power features such as DOOM Snapmap that you just saw, and its already being used to support The Elder Scrolls Online on every platform for millions of players. It will be at the heart of all our games going forward and also integrate our websites into one seamless experience. You can find all the info you crave on Bethesda.net including robust forums to talk about the games you love, exclusive videos and articles, and access to games and new features.

Bethesda.net builds on our commitment to developing and supporting great AAA-quality games.”

The accompanying mock screenshots of their new portal on a range of devices also shows us that the main aim of Bethesda.net is to speak directly to the player. Bethesda’s appearance at E3 is no coincidence – with the show becoming more and more consumer-friendly over the last decade, the audience has shifted from having the show speaking to the rest of the industry, to addressing their audience globally. They are picking up on the fact that speaking directly to the players works, which is why Social Club and Nintendo Direct work so well. 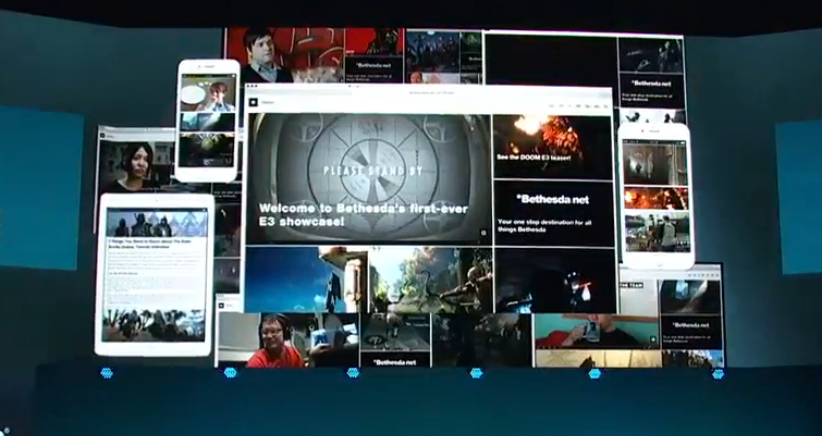 The screenshot is a bit fuzzy (it is captured from the Twitch stream), but looking closer we see articles being published on this new portal, interview videos, and what looks to be either a podcast or a streamed Lets Play (that dude in the orange shirt with the headphones on). It might turn out later to be a good place to showcase what kind of mods people are making for Bethesda’s games, which would have been great for those people selling their mods online (but as you might well know, that fell through). It is interesting that Hines specifically spoke about “the modding history of Bethsoft games” during the presentation, because that’s easily what helped to drive the Elder Scrolls and Fallout franchises to their current heights – mods, created by the community, that change the look and feel of the games significantly (as well as adding copious amounts of naked bodies into the mix for Skyrim).

Because this is clearly a website rather than a game client, you can all rest easy – there won’t be another app to have an account for, or another friends list to curate. Bethesda isn’t stepping away from Steam, even though they could do so if they wanted. Overall, I can honestly say that I’m amped to see where this goes. Bethesda is one of my favourite developers and I always like learning more about the games as well as the lore in the worlds they exist in. What say you, NAGlings? 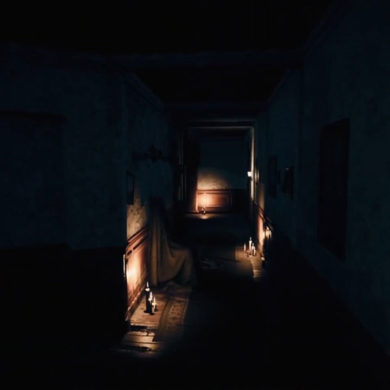 Do Not Open is basically P.T. but an actual game