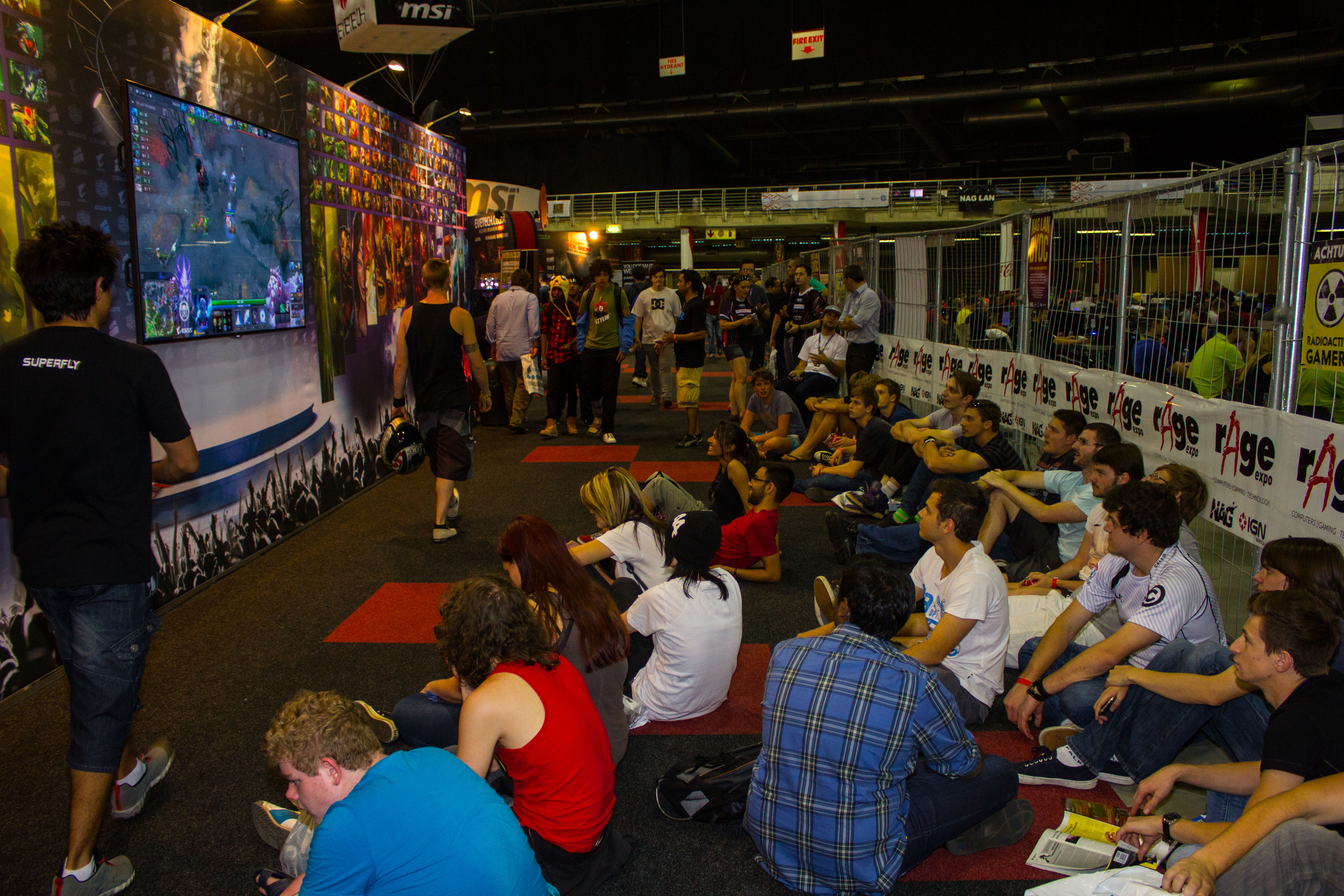 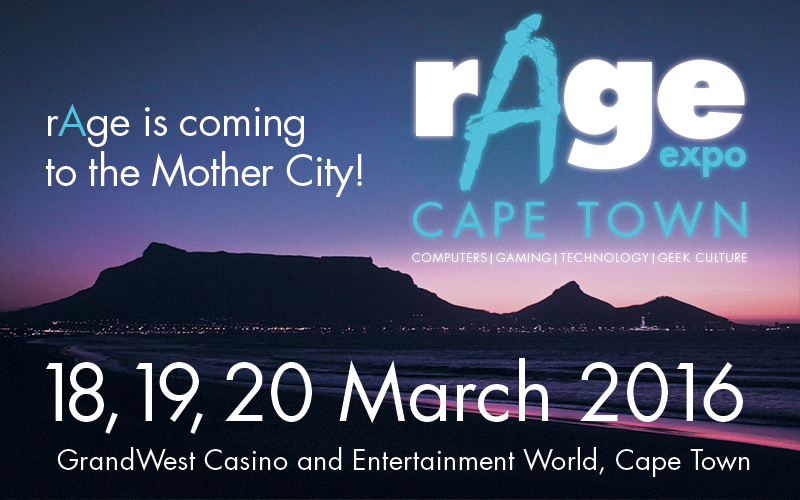 Boom! Did you feel that? THAT was the sound of a hundred-thousand geeks having their minds splosioned all over Cape Town. We’re calling a clean-up crew right now.

Jo’burg has selfishly kept rAge all to itself since 2002, but now it’s Cape Town’s turn to get its nerd on. Starting from 2016, there will be two rAge expos in South Africa. In March, Cape Town will get to revel in all things dorky at the really Awesome geek experience, and in October, Jo’burg will continue to be the home of the really Awesome gaming expo. That’s right, rAge will mean two different things in two different parts of the country, but the focus at both will be gaming, NAG LANs and other geeky pastimes.

rAge Cape Town will take place on Friday 18 March to Sunday 20 March 2016 at GrandWest Casino and Entertainment World in Goodwood. The NAG LAN in Cape Town will kick off at the same time in the same venue.

“HOW IS THIS HAPPENING? I’M SO HAPPY!” we hear you shrieking. Well, good thing rAge’s senior project manager also happens to be part of NAG, so we were able to ask him. “The closure of NAG magazine has allowed us the time and resources needed to expand the rAge footprint into Cape Town. We’re taking some of the key elements of rAge JHB and bringing them to rAge Cape Town with a vision of growing Cape Town into something unique and exciting. The plan is to bring some ideas to rAge Cape Town that we’ve not been able to realise at rAge JHB due to space constraints and other logistical issues.”

But wait! There’s more! (“Oh gosh, MORE?”) We know how Jo’burg hates it when Cape Town steals the limelight, so that’s why we’re announcing that JHB will be getting a second NAG LAN from now on. This second NAG LAN is the result of the original NAG LAN at rAge being unable to keep up with demand. That and a second NAG LAN will allow for way more eSports events considering there won’t be an expo taking up space and attention. For more information on all the NAG LAN events, be sure to keep an eye on the new website NAGLAN.co.za, which will be updating with heaps of details soon.

In the meantime, you folks in Cape Town set a reminder for 09h00 on Saturday 28 November 2015, because that’s when tickets for the NAG LAN 2016 Cape Town will go on sale. Tickets will be available through Computicket.

We’re sure you still have more questions regarding rAge Cape Town, so we fired off a couple of extra tricky ones to Michael, which he answered below. He’s helpful like that. Also, I have to say that because he pays my salary.

People in Cape Town have been wanting this forever, but how long has rAge Cape Town been actively planned towards?

We started rAge in 2002 without knowing what we were getting ourselves into and from then to now the expo has evolved and grown organically, reaching over 30,000 visitors in 2014. If you’re asking about actively planning, it has probably been just over a year, but since 2008 we’ve been considering and talking and arguing and trying to figure out a way to make a Cape Town expo work. I’ve always been careful when asked about rAge Cape Town in the past because I wasn’t sure if we could pull it off, and I’m always hesitant to do something unless it’s representative of the quality experience we have in Johannesburg. I still have no idea how it’s all going to look or work but in my experience these things just sort themselves out if the right people with the right kind of passion put them together.

Why was GrandWest chosen as a venue?

We visited three venues in Cape Town after narrowing down a list of potentials. We looked at everything from air force bases to square-shaped venues to sports arenas. We chose GrandWest because it just feels like it has the right kind of energy. The LAN is a 52-hour non-stop event so we also need to think about that from a security point of view and parents being comfortable with where their kids are staying all weekend. Out of all the places we looked at and spoke about, GrandWest kind of just fell into place when we had specific dates in mind that had to coincide with school holidays. After meeting with the team that own the venue I’m convinced that this is a long term partnership that will see many cool things pop up around South Africa in the years to come.

The venue is approximately half the size of rAge JHB but this isn’t taking into account the LAN areas at rAge JHB. There are some logistical issues getting many of the Jo’burg-based exhibitors down to Cape Town so as the show grows we’re hoping it will expand and eventually fill up the venue (a problem we’re enjoying in Jo’burg each year). It’s hard to try and compare the two events so instead I’m going to work hard on bringing something different to Cape Town so each expo is unique and cool in its own way.

Can attendees expect a greater number of hipsters at rAge in Cape Town, and if so how does one interact with them without wanting to gargle wasps?

As with most things in life, the important thing to remember is that they (the wasps) are as scared of you as you are of them. It might also help to wear your skinniest jeans and remove the lenses from all your oversized spectacles on the day, just to blend in.

What can Cape Town attendees expect that will make rAge Cape Town different to rAge Jo’burg?

I honestly don’t know exactly how the two expos will end up comparing. I’m sure there will be a lot of discussion about this after the first Cape Town event has happened, and I do encourage suggestions and feedback from everyone who attends and is involved. I also expect some of this debate to come from people that didn’t attend either expo. Regardless, rAge Cape Town can’t be similar to rAge Johannesburg for a million reasons. Just know one thing, I’m going to tirelessly work on making the Cape Town expo the very best that I can and continue to innovate and invent for both expos going forward. I think both will have their own rhythm and it’s going to be exciting finding that pulse.

Do you know how big the Cape Town NAG LAN will be?

For 2016 the venue can accommodate 576 gamers – we hope to increase that in 2017 as more space at the venue becomes available for us to use.

The press release says that the closure of NAG magazine has meant that rAge Cape Town has become a possibility. So can the rest of South Africa blame Cape Town for the demise of the last gaming magazine in the country? We can, can’t we? Thanks for nothing, Cape Town. :<

LOL. No, you can blame two things. Print costs increasing exponentially and the advertising world abandoning print advertising for online advertising. Cape Town had nothing to do with it but will now benefit from it. If you want to point the finger of blame at anything, blame the Internet; it’s a fad that just hasn’t gone away. As the saying goes, for every door that closes, another one opens up. We’re thrilled to finally have the opportunity to open this one up! 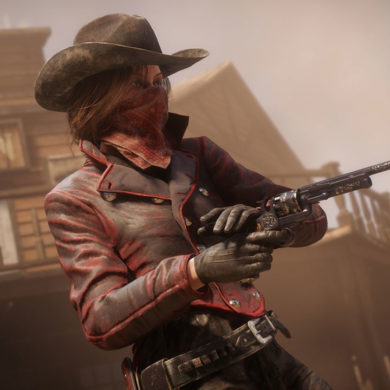 Rockstar acknowledges that Red Dead Online has a problem