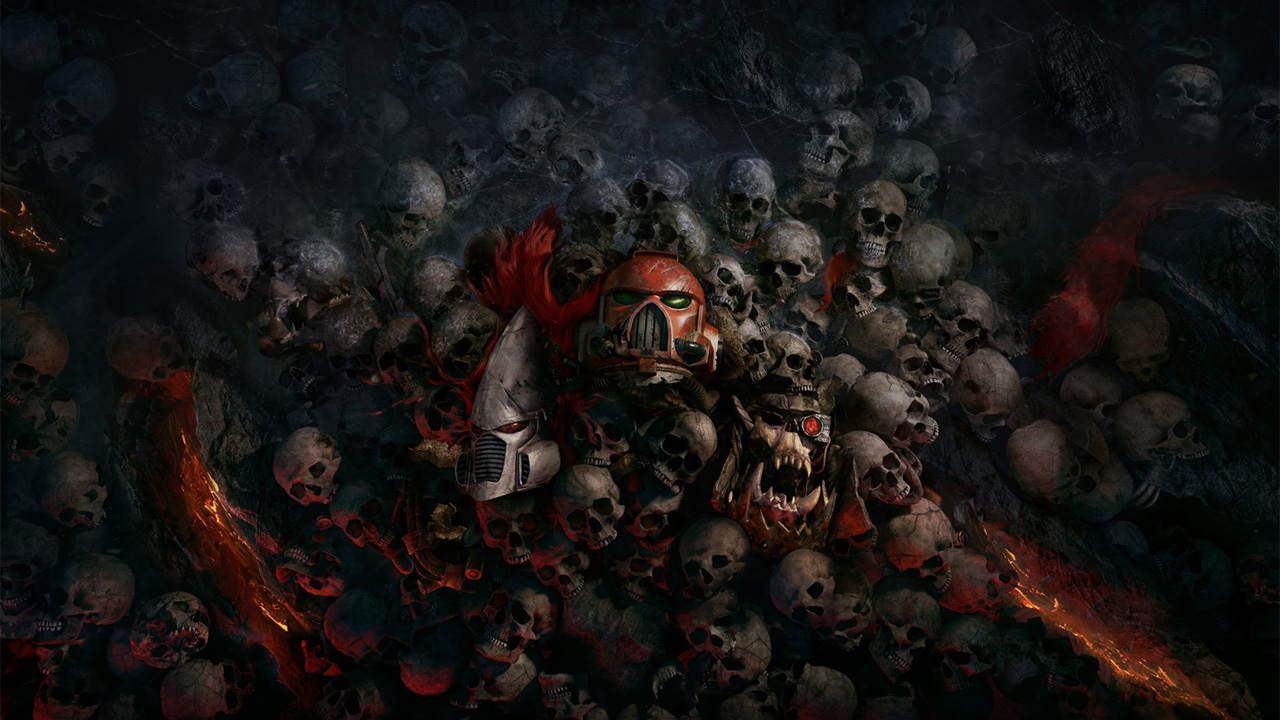 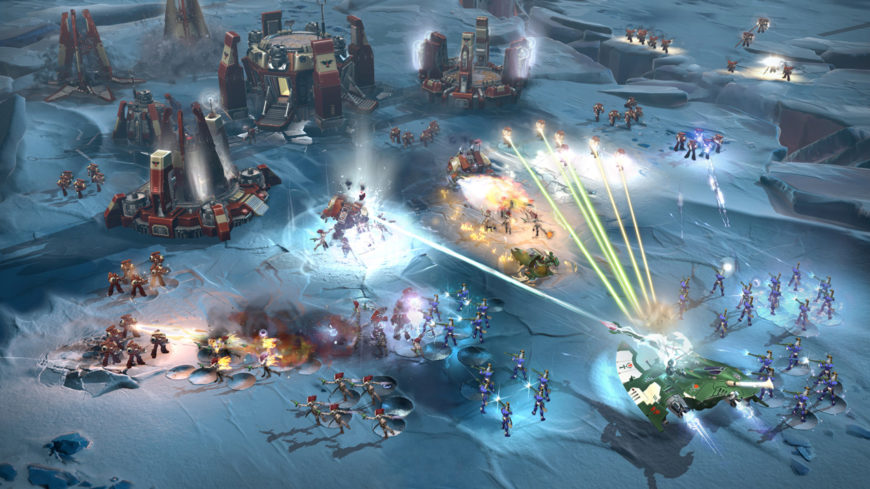 No two Dawn of War games are alike. Sure, placed side by side and looked at through a telescope from the moon, they’d appear largely similar. This is a family of real-time strategy games, after all, and they’re ultimately beholden to the traditional look and feel of the genre. But! Each new entry in the series has managed to feel like it’s taken a sudden left turn and veered off the path set by its predecessor, meaning that every Dawn of War has produced a unique flavour that’s refreshingly different from what’s come before.

Considering the volume of video game franchises out there that’re consistently accused of growing too stagnant, too comfortable with the status quo they’ve manufactured for themselves, Dawn of War‘s insistence on reinventing itself with each new incarnation is kind of amazing.

Let me explain. The first Dawn of War is very much a traditional RTS. You build a base, piece together a snazzy, shouty army, and stomp all over the faces of your opponents. Its primary claim to fame lay in its dedication to emulating the unflinching ferocity and endless violence of the Warhammer 40,000 mythos. Its isometric battlefield was more alive, more rambunctious than most, largely thanks to impressively detailed, synchronised kill/death animations. In other words, Dawn of War‘s units weren’t relegated to repeatedly, boringly bashing each other with sharp objects until they collapsed in a red-tinted pile on the terrain – they mercilessly brutalised one another, tore each other apart limb by limb. The result was an RTS that oozed its own distinctive character. 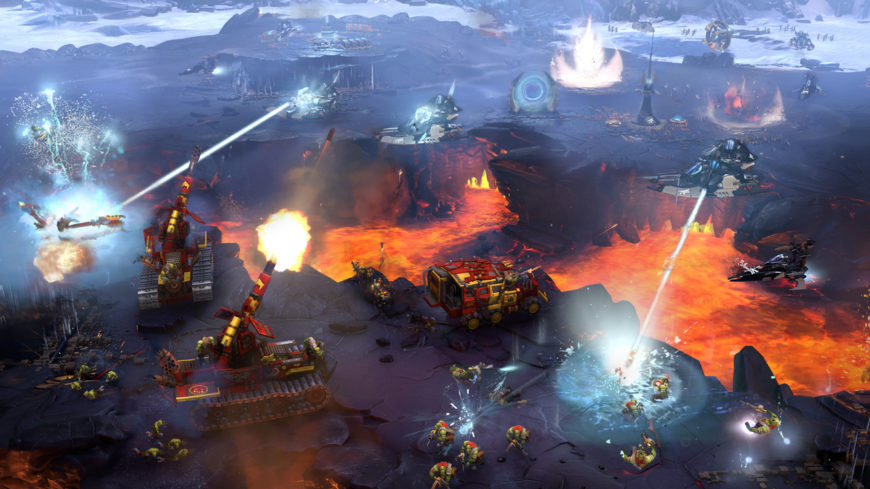 Dawn of War II is similarly vicious, but it took a surprising detour from the basic RTS mechanisms of the original game. Base building vanished almost entirely. Armies became smaller, individual units more valuable. Playing it now, it feels more intimate, more personal – particularly the solo campaign, which introduced ARPG-style character progression/customisation and a whole heap of loot hunting. I imagine that the alterations Relic made to the tried-and-tested formula might’ve made it tough to love if you were hoping for a straightforward real-time strategy romp. Personally, I adored it. I thought it was remarkably original, and to this day it remains a one-of-a-kind experience.

Now, eight years later, Dawn of War III has arrived, roaring chainsword in hand. If you were thinking it’d snatch the torch out of Dawn of War II‘s hands and run with the same design philosophy, you’d be very wrong, all over again. 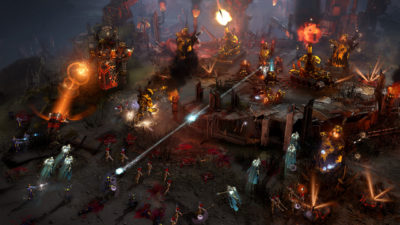 DoW III has taken the series in a direction more akin to the original game, but dials the intricacies of its mechanics way up. At its core, this is more of a traditional RTS than the second game. Base building is back. The unit count is more plentiful, and your squads of virtual warriors are meant to be expendable, not much more than cogs in your tactical machine, fodder for your fiendish schemes. The game’s dispensed of DoW II‘s ARPG mechanics and branching choices, instead offering up a straightforward series of missions for its solo campaign. As a result, the solo campaign is entertaining, but not nearly as compelling as that of the previous game.

Narratively, it doesn’t solely focus on any one of the game’s three factions (Space Marines, Orks and Eldar), instead switching between the three along a predetermined sequence of missions. It’s an interesting dynamic, and the story – which revolves around the three races vying for control of a prophetic, immensely powerful weapon – is a decent romp, but it comes across a bit flat following the intrinsically engaging nature of the previous game’s solo campaign. There’s little variety in the missions and their objectives, save for a few memorable exceptions, which means that at times it starts feeling disappointingly tiresome and samey. That said, it’s worth playing. 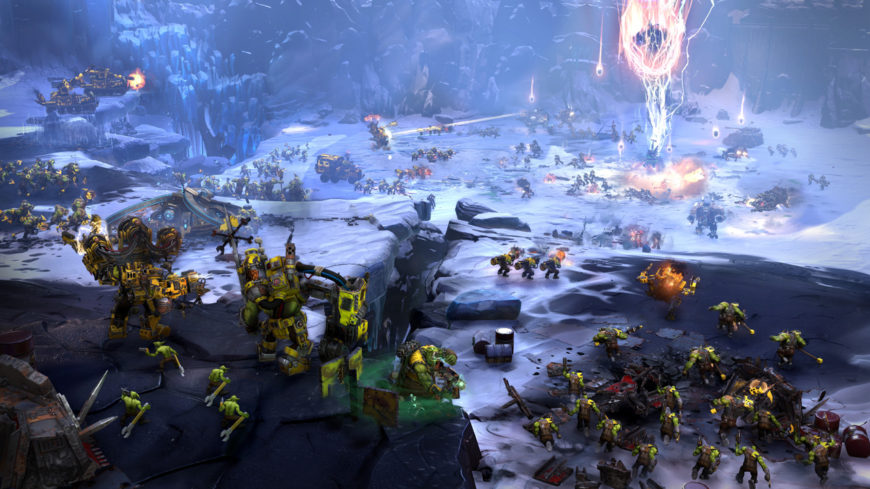 The real meat lies in the AI skirmishes and multiplayer matches, and it’s here where the full might and strategic depth of DoW III hopes to shine. The fundamentals of DoW haven’t changed much. Maps are covered in capture points, which you’ll have to take and hold to generate the resources that’ll fund your plays and counter-plays. Most units you commission arrive on the battlefield as squads. As squads take damage, the individuals within them perish one by one, reducing the squad’s overall effectiveness – meaning that you’ve constantly got to be mindful of creating enough breathing room to get your troops back to base and replenish them to full strength, or better yet, ensure you’ve got a method for reinforcing them on the front lines.

Beyond that, there’s a bunch of new stuff with which to familiarise yourself. Multiplayer is focused on the new Power Core Mode. As the name suggests, each team gets a power core, and your goal is to turn it into a pile of glowing rubble, along the way destroying the shield generators and turrets that protect it. It still boils down to making a mess of the enemy’s base, but Relic has cleverly balanced their flagship multiplayer mode in such a way that tension is always high, stunning comebacks and upsets are always possible, and there’s always an opportunity for sneaky tactics. 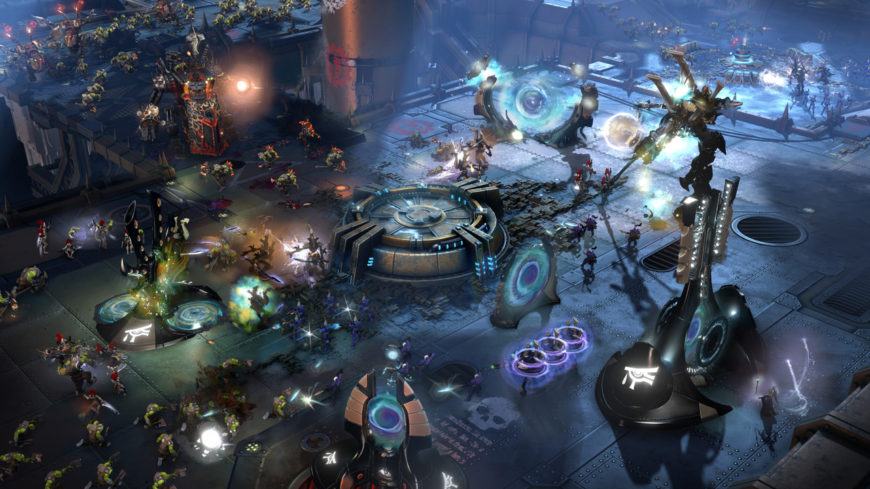 The synchronised kill/death animations are gone (sadface, boooo, etc.), as is much of the dynamic cover system. No longer do you need to worry about shielding units behind bits of scenery that provide light/heavy cover. Instead, a new type of control point provides ranged (but not melee) cover to any units within its sphere of protection. Personally, I prefer the old way, but this revamped system makes total sense in the context of DoW III‘s new direction. More on that in a bit.

Elites are the new hotness in DoW III. These super units and their various, incredibly powerful abilities are the heart of your forces. Elites come in a range of forms: some are specialised squads of particularly effective warriors. Others are supporting spellcasters. A few are hulking, nigh-unstoppable behemoths bristling with devastating firepower. They’re summoned using a separate resource that’s accrued very slowly, each one carrying a different cost. Only three of them can be selected before each match, so choosing the right spread of Elites is essential. Careful use of Elites can tear enemy forces to shreds and swing matches in your favour, and bringing down late-game Elites often takes a costly, concentrated effort. In addition to Elites are Doctrines, which are essentially army-wide special abilities. Like Elites, only three Doctrines can be equipped before a match, so choosing ones that complement your play style and strategies is important.

Dawn of War III is tightly designed to encourage constant action and minimise the downtime between critical clashes. Defensive, reactionary play is entirely possible if that’s your thing, but aggressive, constantly offensive play is very obviously encouraged by the game’s mechanics. I get the feeling it’s a response to the dwindling popularity of the RTS genre, whose complexity and relatively slow-paced nature has been abandoned by many in favour of MOBAs. The almost wholesale removal of the cover system means that players are discouraged from hunkering down, and the new concept of “escalation phases” reinforces DoW III‘s insistence on forward momentum and constantly hunting for opportunities, for vulnerabilities in your opponent’s armour. At the first escalation phase, for example, losing units refunds some of their resource cost, so aggressively moving to capture as many resources as possible while poking and prodding your foe is a good idea. At later escalation phases, there’s no such refund. Losses have a more severe effect, but the trade-off is that you’ll be earning more resources from each point you managed to capture and hold through the early- and mid-game, which translates into you having easier access to the powerful, expensive top-tier units.

In action, it’s brilliantly chaotic. Even without those eye-catching death animations, DoW III maintains its vicious, bloody heritage. Each faction plays pleasantly differently, and each also has a powerful super-ability, which can suddenly remove entire armies from existence if they’re used correctly. They’re kind of ridiculous, and it’s hilariously heartbreaking to see all your hard work vanish in the blink of an Eldritch Storm. It’s a good fit for DoW III‘s design ethos: it expects you to build bigger, rowdier armies, to be used in bigger, rowdier battles – and it expects you to live with the notion that there’s a good chance your beloved forces will be eviscerated in a storm of fire and metal, flesh and blood. You’ll be okay though. There is only war, after all, and if you play smartly, it’s always possible to come back from near-crushing defeat. 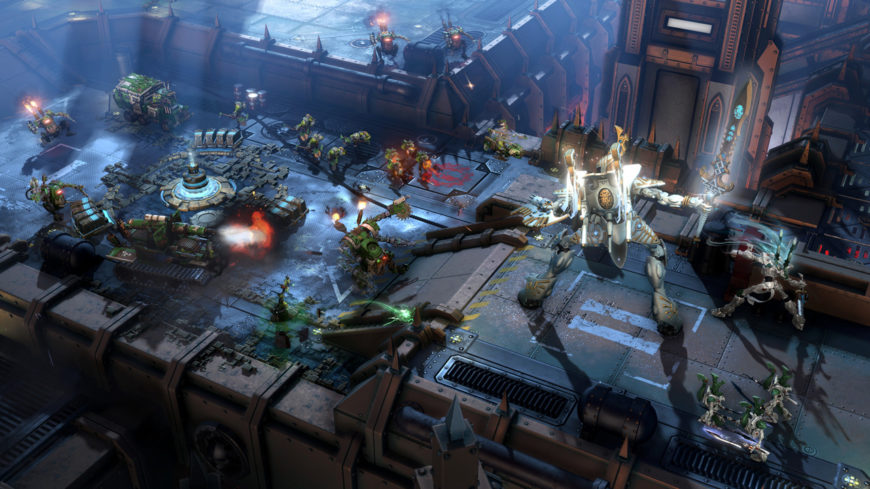 I’m a fan of Dawn of War III. I think it’s a fantastic game, featuring a satisfying amount of mechanical complexity and strategic depth. As with the series’ previous entries, it perfectly captures the look, feel and personality of Warhammer 40,000. That said, it’s not perfect. Perhaps the most disappointing thing about it is that, in glaring contrast to the second game, which felt entirely unique, something genuinely new in the RTS genre, Dawn of War III plays it too safe. It offers a fairly distinct take on the decades-old formula, sure – but if you look at the two games as siblings, DoW II is the cool, hip, exciting, super-interesting, sometimes-abrasive older sister with whom everyone wants to be friends because she has a knack for making even the most mundane moments intensely exciting. DoW III, meanwhile, is the younger brother who’s more reserved, who’s entirely inoffensive, who’s nice enough to keep around but would never be caught doing anything outrageous. Who would you rather spend a weekend partying with?

Also, Relic: if we don’t get some sort of Last Stand mode starring those sexy Elites, I’ll never forgive you. Just saying.

80Dawn of War III is an outstanding real-time strategy game, and Relic has proven once again that they’re masters of the genre. It’s beautiful to look at, it’s built around a solid foundation of mechanics that encourage aggressive play and constant conflict, and it oozes character and flair at every turn. It plays things mighty safe though, choosing to closely follow longstanding RTS conventions. I find myself wishing it’d separated itself from the pack by taking similar risks as Dawn of War II, which remains my favourite game in the series. 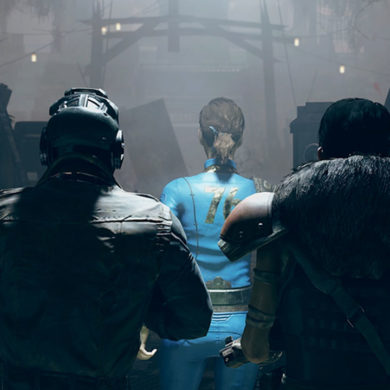