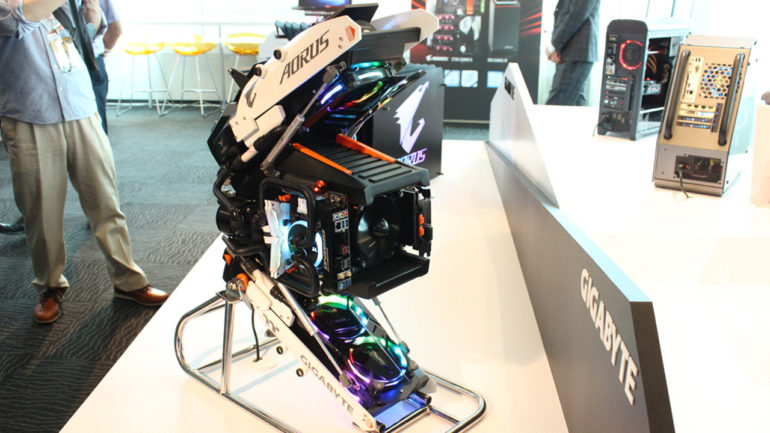 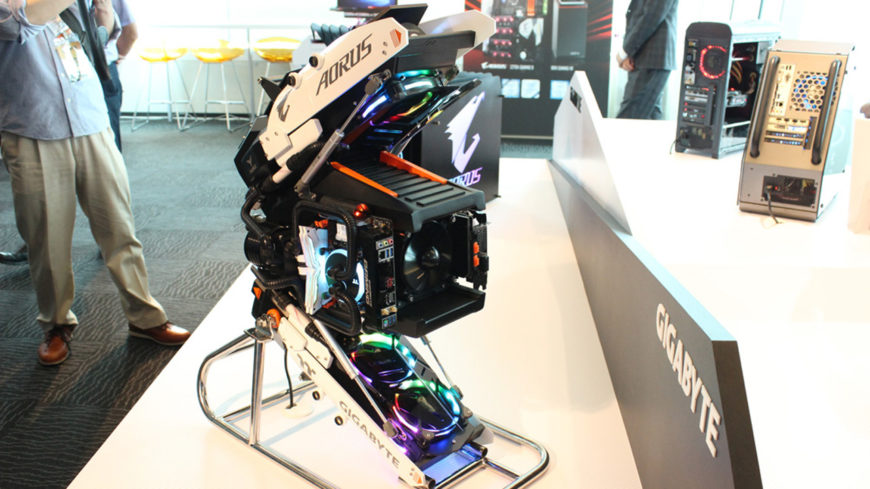 From motherboards to mini PCs to graphics cards, GIGABYTE makes it all – and it was all on display at the GIGABYTE VIP suite at Computex in Taipei earlier this month.

As always, what stood out for us was the manufacturer’s new range of gaming motherboards, in particular the X299 AORUS Gaming 9. Decked to the brim with the most advanced connectivity options and support for the latest CPUs, memory and graphics cards, this is undoubtedly going to carry a hefty price tag, but it’ll perhaps be the most complete motherboard GIGABYTE has ever put together.

Not to be outdone, we also saw the BRIX VR station. It’s a tiny PC housing some potent hardware, including a Core i7 7700 and a GTX 1060 graphics card. It’s able to give you a full VR experience in a miniature package, and we hope to see this model on our shores as there was nothing else like it at the show, or at least not of that size packing such a punch. The original BRIX Gaming was a great idea, but one that was never as fully realised in the marketplace as it should’ve been. Hopefully with the BRIX VR this’ll change, because much like the Corsair One, it’s one of the most appealing systems we’ve seen from the industry in a very long time.

Unfortunately, we weren’t able to see any new GIGABYTE or AORUS notebooks, but given that AORUS has produced some fine specimens in the past, look forward to some Coffee Lake-based models later in the year.

Once again, VR was big for GIGABYTE in 2017, with their booth at TWTC mainly focused on the full-motion VR/4D experience. The lines were long, but understandably so as GIGABYTE was the only top-tier vendor to feature such an elaborate VR setup. I’d say it was impressive enough to convince just about anyone that the future of immersive entertainment is undoubtedly linked to the future of VR.

We were also invited to the VIP suite, where we saw several case mods from talented individuals from all over the world. There was one unit which stood out from the rest, and it was by far the most impressive build of the suite, and perhaps of the entire show in some ways (barring a particular mod at Cooler Master’s booth). It was truly remarkable workmanship and the AORUS components fit in there perfectly. I’d usually not specifically highlight a case mod at a vendor’s booth, as they’re pretty common, but this particular one was so appealing that it drew me in completely.

Overall, GIGABYTE showed a number of components which are sure to edge the company along in the right direction in this competitive market. They have plenty of graphics cards, peripherals, pre-built PCs, motherboards and so much more to offer based on the new platforms – all the way from AM4 boards right up to the impending Coffee Lake-based notebooks and more. The next 6-12 months for GIGABYTE is going to be exciting to say the least. 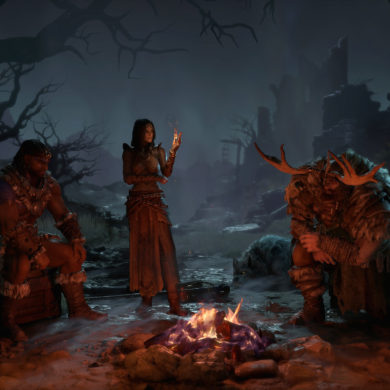