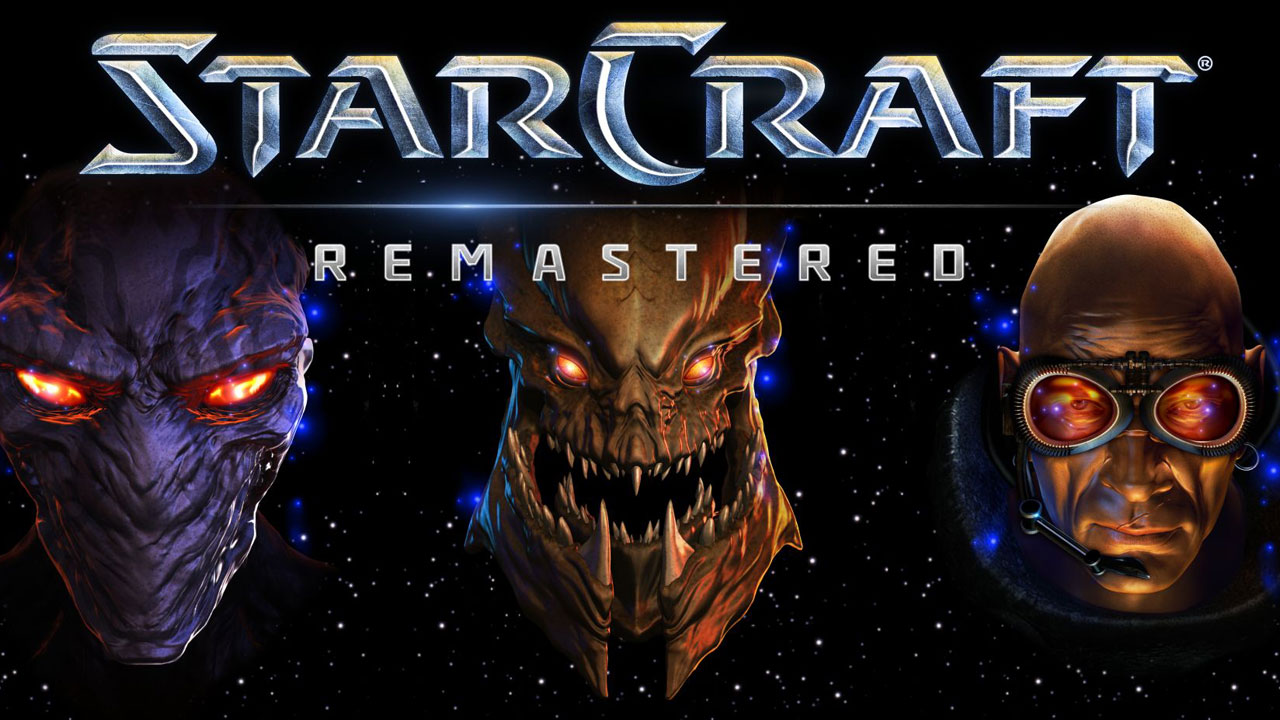 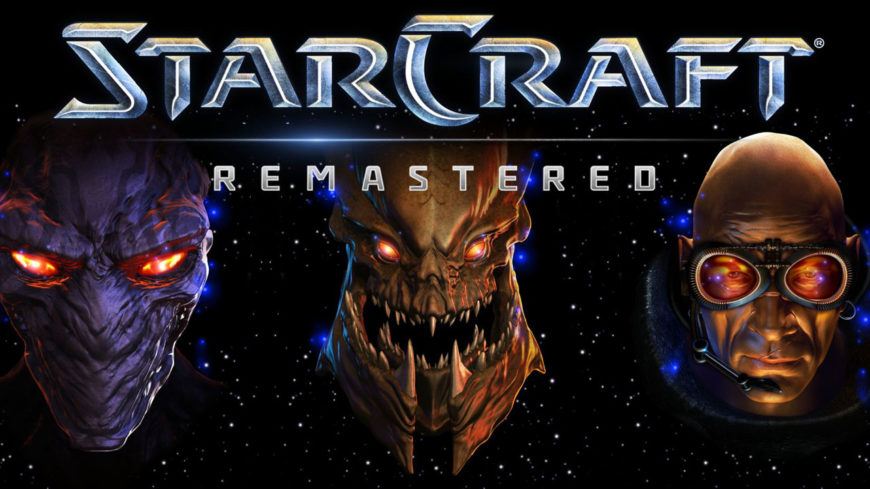 From the brain of Michael James:

The original StarCraft was the first game I ever reviewed for NAG magazine, all the way back in 1998. That’s the same year Unreal, Gran Turismo, Spyro the Dragon, Grim Fandango, Baldur’s Gate, and Half-Life were all released. What would you give to see a line-up like that coming out within the space of a single year? It’s definitely not something you see these days. Speaking of things you don’t see these days, StarCraft: Brood War was released later that same year, expanding and polishing the classic StarCraft experience to a lustrous shine that’d go on to last over a decade. 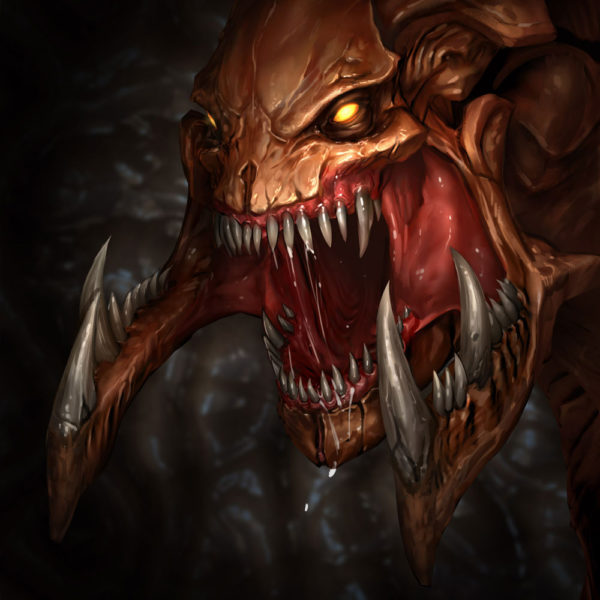 1998 was a long time ago, I was such a fresh-faced young lad back then, and StarCraft was the biggest news in gaming that month (yes, month – because look at that list of releases again). That’s why I approached StarCraft: Remastered with some anticipatory terror. Would my rose-coloured, nostalgic memories ruin the experience, forever sullying my younger self’s impression of the game? It’s a bit like browsing old high-school pictures really. Looking back at those “cool” people with their “slick” hair styles and “trendy” fashions of the day makes you laugh. Of course, you then get to your own hideous portrait, and quietly vomit in your mouth while squeezing back tears of shame, wondering how you even made it to adulthood. But we’re not here to talk about the good old days.

We’re here to talk about Blizzard releasing a remastered version of StarCraft and its expansion, Brood War. Considering that both the original game and its expansion are free these days, it looks like Blizzard has found a smart way to draw a little more blood from this well-eroded stone. Let’s see how they did. 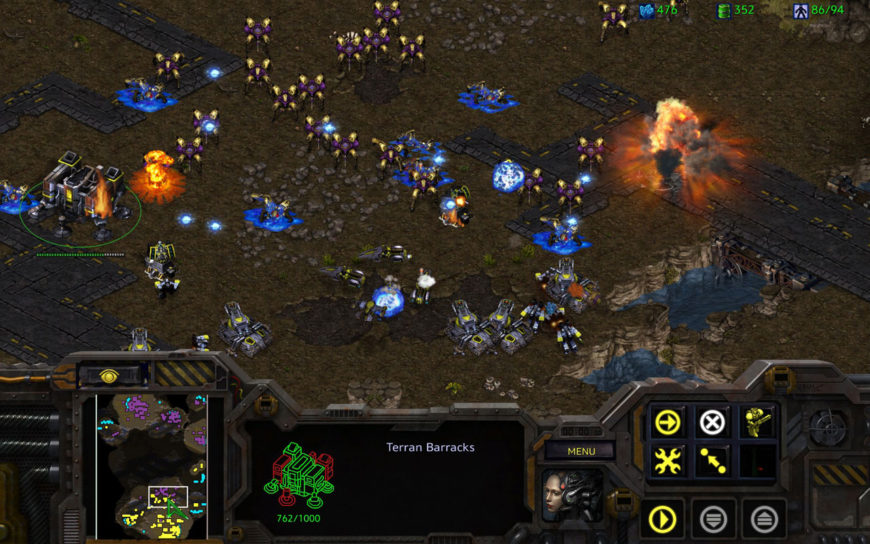 It’s only when you play the original StarCraft that you realise just how far StarCraft II pushed things along. Inconceivably, some functionality that would be considered critical in a modern RTS just wasn’t part of StarCraft back in 1998. You can’t, for example, get a worker to rally on a mineral deposit and automatically mine it. Idle workers aren’t conveniently listed for you to find and put to work. In one game, I missed an SCV hiding behind a factory for the entire first half of the match. Lazy sod. I had him in front of a firing squad by sundown. Well, more like a Zerg claw by sundown, if I’m being honest. Look, I needed that ridge to be scouted. I’m sorry. I sent a nice note and a box of chocolates to his family.

Another big quality-of-life omission is not being able to add multiple buildings to a single control group. Overall, StarCraft’s micro mechanics are actually terribly inefficient, and playing it can be a real chore, because you have to do everything yourself. This might sound pretty lazy, but returning to these systems after playing StarCraft II is a big shock. These basic game dynamics haven’t received a makeover because you can still play against people who haven’t bought the remastered edition. In other words, StarCraft: Remastered is a purely cosmetic improvement, with no tweaks to the functionality. Of course, this isn’t a negative, and it doesn’t take too long to slip back into the groove and get killing. But that groove gets wet when it’s dark and rough around the small edges. [Uhhh… Sure? – Dane]

Graphically, the added polish looks exactly as you’d expect to find in a remastered edition. StarCraft: Remastered lets you look back to a different point in RTS time, but instead of reeling back in horror as you try to make sense of the pixelated mess on your screen, this version lets you enjoy the past as your nostalgic eyes remember it. Not only does it look fabulous, it also sounds amazing. All the sound effects, music, and silly things your units say when you click on them a hundred times have also been remastered. I know this isn’t a technical term, but everything just looks and sounds crispy.

It’s great fun getting back into the campaign and reliving those classic missions, and the entire experience is still surprisingly solid. “They don’t make them like they used to”, is what comes to mind. On the multiplayer front, a few embarrassing losses to the AI quickly reminded us that there isn’t an AI difficulty setting in StarCraft – imagine that? Yes, it got so bad that we actually went looking for one. We did win a match (eventually), and it made us feel good. Overall, this remastered edition is a great way to look back at where we’ve come from. It makes you wonder what innovations StarCraft III might bring that we’ll miss when playing StarCraft II: Remastered.

It’s a fun trip down memory lane, especially the single-player campaigns, but I can’t see myself playing this for long. I’d rather just play the sequel and be done with it. 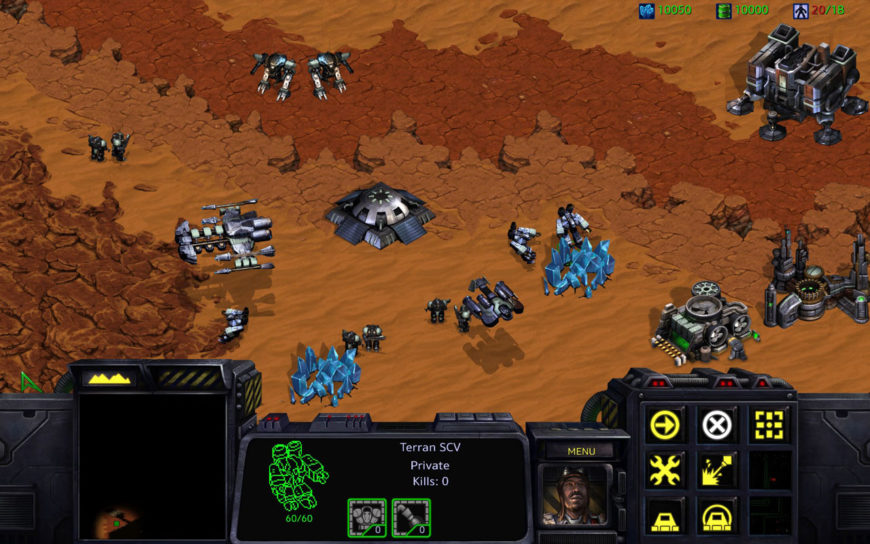 From the brain of Dane Remendes:

Playing StarCraft: Remastered is strangely educational. Not because this revamped version of the game introduces anything new to the classic StarCraft experience, but because it highlights just how much the real-time strategy genre’s fundamental mechanics and basic systems have evolved in the nearly 20 years since the game’s original release.

It’s almost comically clunky and fiddly, to the point where I imagine it’d be nearly completely unapproachable to anyone who didn’t witness first-hand the clunky, fiddly golden age of RTS games during the ‘90s and early 2000s. Unlimited control groups, queuing construction orders, workers that automatically harvest resources as soon as they’re built – these are all things we’ve come to take for granted as the genre has advanced. Younger, trendier sibling StarCraft II is the perfect example of this, with its unflinching focus on automating and streamlining all the micromanagement fluff so you can get on with the important business of building a shout-y, shoot-y, claw-y army and launching it at your opponents’ faces. 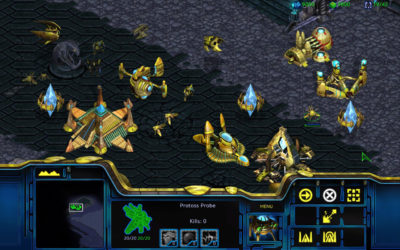 That said, it’s testament to the timeless design of StarCraft that its clunky, fiddly bits don’t detract from the fact that it’s still hugely entertaining to play. The strategic depth of the thing is intact and mighty impressive, and playing it with/against friends is sure to shake loose a wealth of dormant memories. It’s still the StarCraft you love (and includes the Brood War expansion too), but it’s been dipped in a bucket of baneling juice to spruce up the visuals and audio. You’ll also find modern conveniences like easy-to-use Battle.net baked right into it. The entire single-player campaign is there too, complete with those awesome CGI cut-scenes. It’s hilarious that those were once considered state-of-the-art.

I love that StarCraft: Remastered is a thing that exists. I wouldn’t eagerly recommend it to anyone who doesn’t have a nostalgic connection to the original StarCraft, but if you’re curious to experience a crucial piece of RTS history for yourself, this is an excellent way to do it. Similarly, if you’re keen to relive your fond memories of heated StarCraft matches at LAN parties, this revamped re-release is exactly what you need. It’s a time machine to a bygone era, and practically a necessity for diehard fans. 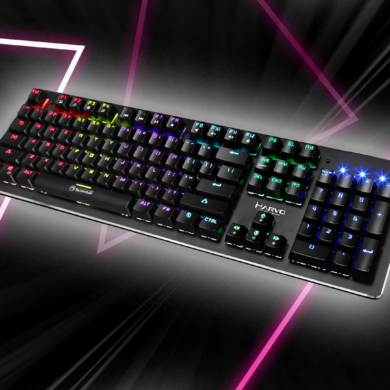