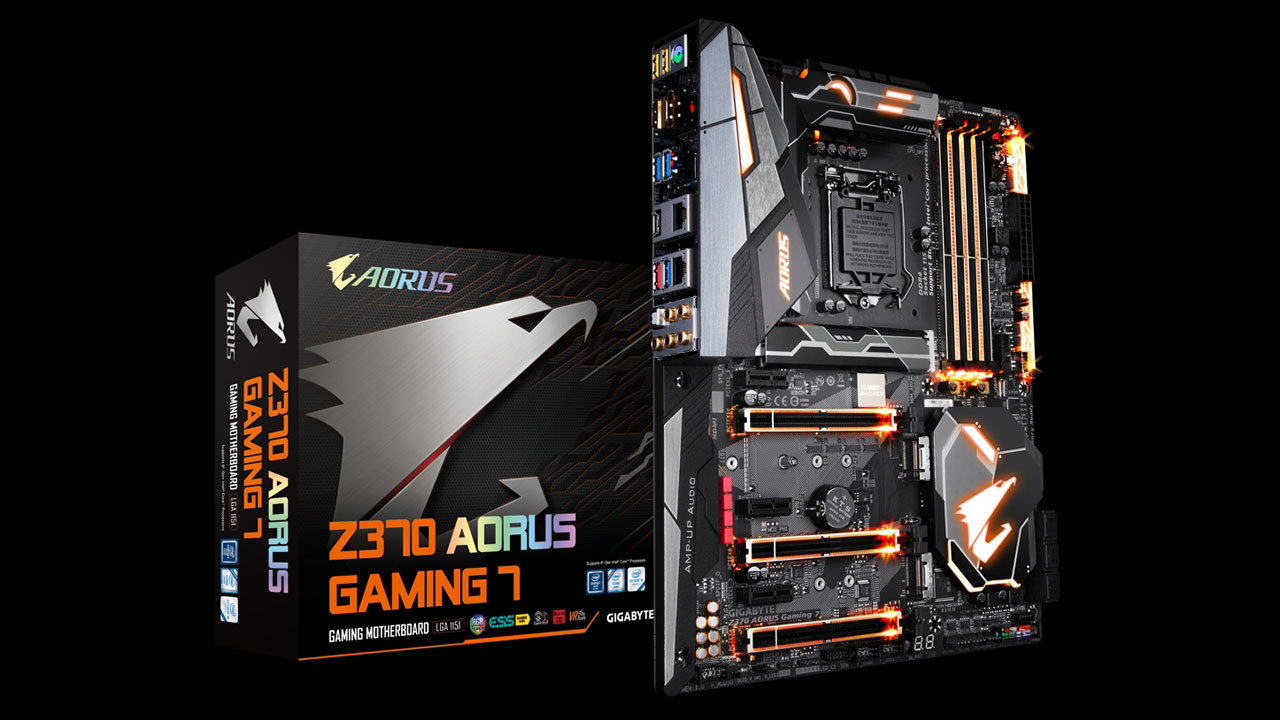 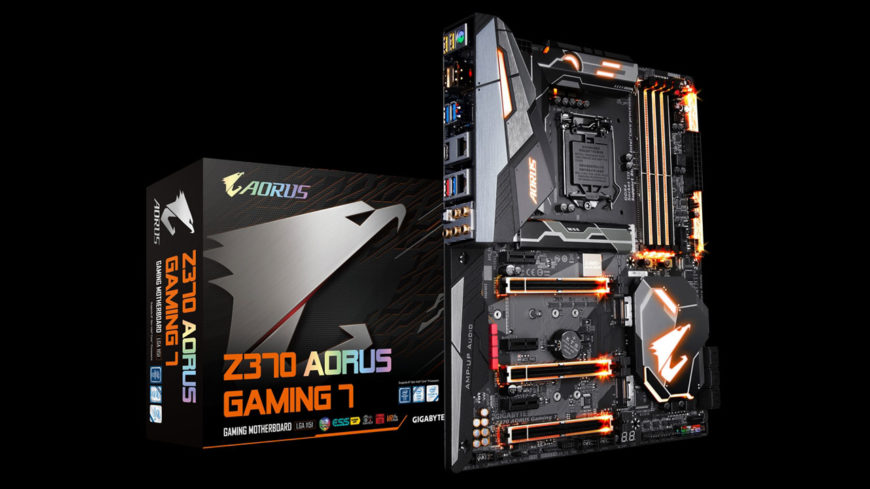 When it comes to high-end Z370 motherboards from GIGABYTE, the Gaming 7 is about as high-end as you’re going to get. It’s decked out in all the glory you’d typically see from AORUS motherboards, like a high-end audio system, dual Gigabit Ethernet, and a host of other features which are supposedly built to serve even the most discerning gamer’s needs.

That said, it’s odd that GIGABYTE has decided to forgo wireless connectivity. It’s not much of an issue in itself for most people, but at this price point (and with this model designated as their most premium SKU), wireless connectivity isn’t an unreasonable expectation, to say the leas – even if it was at the expense of the Killer Networking NIC controller.

That aside, this motherboard is a comprehensive package that delivers to its target audience in just about every manner. It’s becoming increasingly difficult to distinguish one motherboard from another, and to this end GIGABYTE (much like other vendors) are focusing on aesthetics as a key component in their arsenal. How well they achieve this goal is no longer controlled by their various product management teams, but left largely to the end user via configurable RGB lights and headers. 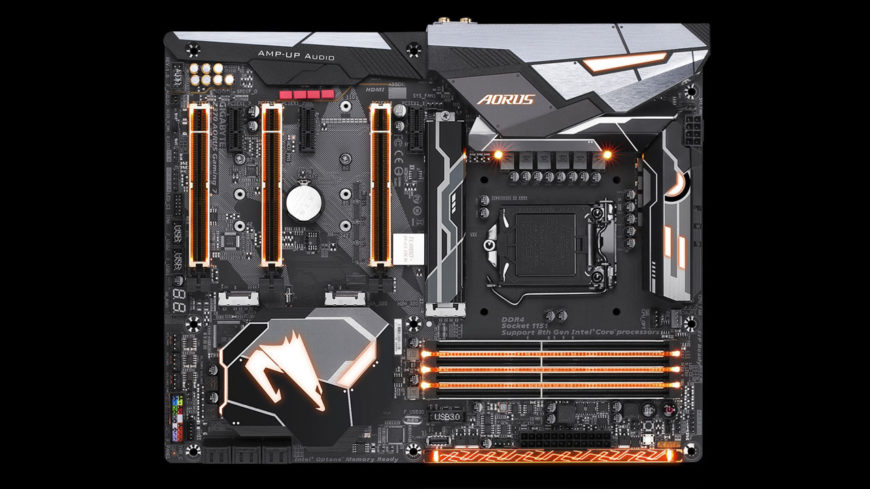 With this in mind, the Gaming 7 has several lighting zones which can be configured independently to your liking, and this includes the typical lighting patterns such as pulse and breathing modes. You can control this via the UEFI – or even better, via the Windows application. You could ignore all of that and still derive value from this motherboard, but for those who’re into case modding or general PC customization, this is indispensable in the modern age of PC DIY.

For someone like myself though, who’s more interested in extracting the most stability and performance out of any system, the Gaming 7 does a fairly respectable job. The board supposedly supports DDR4 4,133MHz, but understand that this is going to be largely academic as you’re unlikely to ever find a kit that’s capable of this frequency on this motherboard. For that memory frequency you need a different memory signal layout, like those present on two-DIMM, high-performance overclocking boards. That said, DDR4 3,866MHz is more than enough for the typical system wherein this board will find its home. Bear in mind that gaming performance at 4K or even 2K WQHD will not be affected in the slightest by any DRAM frequency past 3,200MHz.

Previously, GIGABYTE chose Creative Labs audio processors for all their high-end audio solutions. All of them were a cut above the rest, and in my opinion they provided the leading motherboard audio experience for years on end, barring a few moments of brilliance from competitors. 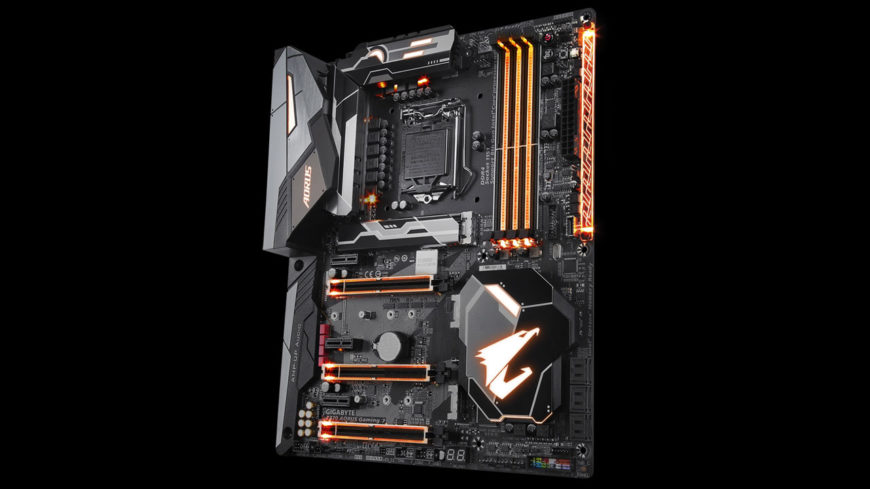 This time around, things are different in that they’ve resorted to the more familiar ALC1220 codec and built an impressive system around that. That’s mainly thanks to the ESS9018Q2C DAC, the familiar Nichicon WIMA Fine Gold capacitors, and a Texas Instruments LME49720 operational amplifier, all powered by the comprehensive Sound BlasterX Pro-gaming 720 software suite. Technically there’s nothing that ties this software to the underlying audio hardware, as it’s an OEM solution available to other manufacturers as well. The difference here is that it sounds and functions so much better because of the underlying hardware GIGABYTE has chosen to use.

It’s certainly not their best audio package to date, but it’s definitely a cut above the many offerings on the market. For your audio needs, GIGABYTE once again delivers the goods and you’ll not need to think about upgrading your PC’s audio ever again.

Moving on to storage, GIGABYTE has taken a cue from industry trends and outfitted the Gaming 7 with not two, but three M.2 connectors. Two of these are capable of full-length 22110 devices, and the third is limited to the more common 2280 length – which is unlikely to ever be an issue, given that these days even 1TB drives come in the 2280 form factor. The important thing about all this is that it leverages the capabilities of the Z370 chipset and its many PCI Express lanes from the PCH.

Each attached M.2 drive theoretically has a full 32Gb/s of bandwidth available when all three slots are occupied with capable drives. Throughput in excess of 3.5GB/s read speeds is possible under those conditions. It’s impressive, but unlikely that this’ll be the chosen use-case for most people. For YouTubers and other content creators working with high bit-rate 4K content, however, this may just come in handy.

Right, let’s talk performance. As if it wasn’t already obvious, I found no noticeable performance issues. If you tinker with the UEFI, you’ll discover there are memory timing options which may help boost performance even further. When dealing with sensitive synthetic benchmarks these boosts will be obvious to see, but in the real world there’s little to no difference between this board and, for example, a dedicated overclocking SKU such as the LN2 board. It may translate into 400 or even 500 extra points in 3DMark Fire Strike’s physics test, but it’ll have no bearing on game or productivity performance at all.

As a complete package, the GIGABYTE X370 AORUS Gaming 7 offers excellent performance for its intended purpose. The only potential issue you may have with it is that six USB 3.0 Type-A ports on the rear I/O might not be enough, given that we live in an age of boards having up to 10, even 12 ports sometimes. Other than that, there’s nothing here to dislike or in which to find fault. The price is fair, and matches what competitors are asking for similar products.

Ultimately, it’ll be up to you to decide if this board speaks to your needs and budget. You aren’t likely to find many (if any) better packages for the price.

8GIGABYTE has put together a solid board with plenty of performance and tuning capability. That said, its UEFI interface is weaker than it could be, which lets it down and keeps it from getting a higher score. This won’t matter for most users though, and as such it’s certainly worth considering for your high-end gaming needs. 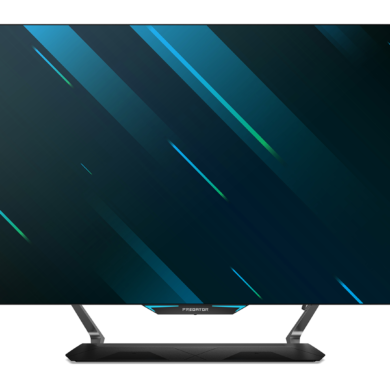