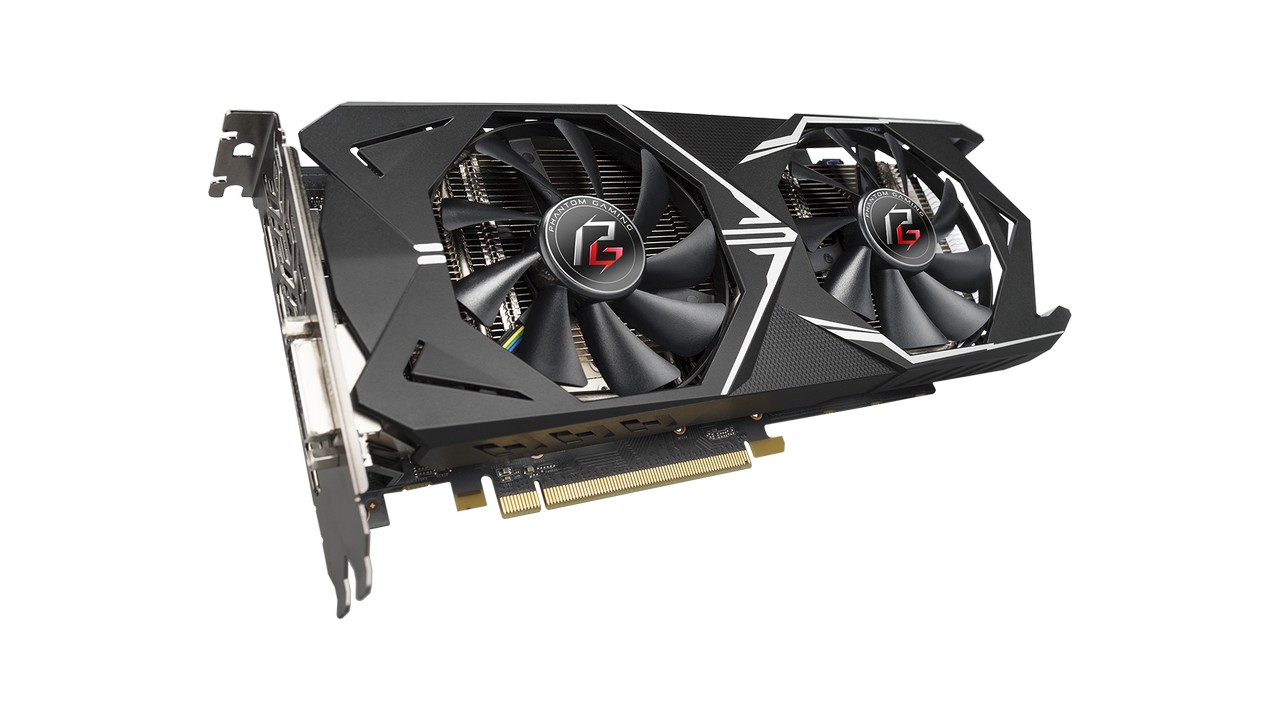 ASRock enters the GPU market as an AMD partner

ASRock’s announcement of their new Phantom Gaming brand was a well-kept secret until Digitimes leaked news earlier this month that they were planning to sell GPUs. Yesterday, the company finally revealed what they had been working on. As expected, it was a lineup of AMD RX 500 graphics cards, and they look really good for a first attempt by the motherboard manufacturer. ASRock says they’re planning a Q2 2018 launch for their lineup, which could take place as soon as April next month. This is the first new partner that AMD has signed up for GPU production since 2013.

“ASRock finally expand into the graphics card field,” said Mr. LL Shiu, ASRock Chief Executive Officer. “We are happy and proud to team up with AMD, our strong and reliable partner, and of course we look forward to bringing out more interesting and competitive products in future.”

“ASRock is an industry leader with some of the world’s best AMD-based motherboards being sold in the market today, and we are thrilled to team with them to help us bring incredible gaming experiences to gamers with Radeon GPUs, “said Scott Herkelman, corporate vice president and general manager of the Radeon Technologies Group. “The new ASRock Phantom Gaming Series, based on the powerful Radeon RX 500 Series graphics cards, will provide gamers the best of Radeon features and performance which will include FreeSync, the ultimate technology for smooth and stutter-free gaming, Radeon Software Adrenalin Edition for seamless streaming, sharing and gameplay capture now with mobile device functionality, and Radeon graphic’s highly optimized DirectX 12 and Vulkan performance.”

For gamers, this is quite a turn of events. ASRock has become one of the top motherboard manufacturers in the market, and the X370 Taichi has been one of the best all-round boards in the socket AM4 ecosystem. Every motherboard vendor on the market wants to also sell GPUs because of the ecosystem sales that they can achieve. A lot of enthusiasts like to match branding and styling in their system, and if they’re using an ASRock motherboard, there’s a high chance they’ll want an ASRock GPU as well.

The lineup starts with the Phantom Gaming Radeon RX 550 2GB and RX 560 2GB GDDR5. These GPUs are dual-slot cards with a small form factor board design, intended to be used in budget systems with less effective cooling, or in small ITX builds that can’t accommodate larger cards. The Phantom RX 550 has a base clock speed of 1100MHz with the memory clocked at 1500MHz. ASRock has also configured an overclock profile which is called OC Mode, with base clock speeds of 1144MHz on the GPU and 1560MHz on the memory.

The RX 560 is not a full implementation of the RX 560 die. It has 896 shader cores instead of the full 1024 shaders, which makes it an RX 560D product. Among similar RX 560 cards, it has a base clock of 1149MHz with memory also set at 1500MHz. The OC Mode preset ramps that up to 1194MHz on the GPU and 1560MHz on the memory. It’s not a bottom-rung design, and it’s in the same league as other single-fan designs, but out of the box it won’t be winning performance tests against other designs from existing GPU vendors. 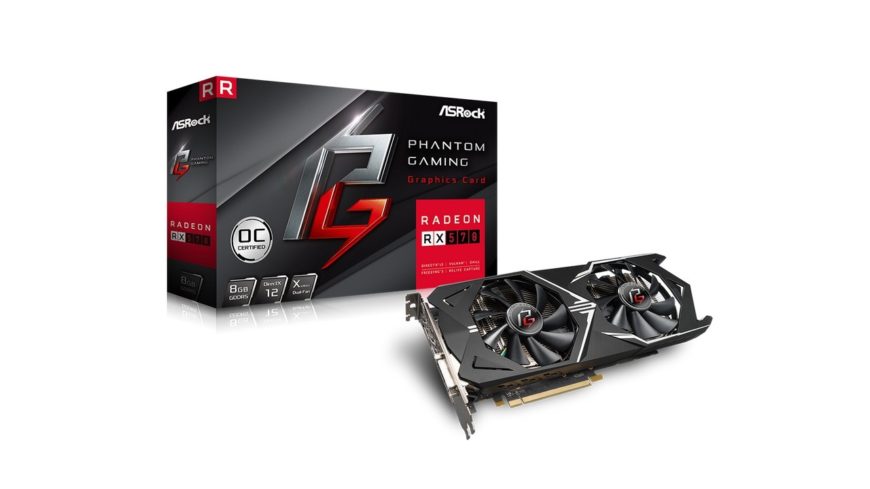 Next up is the Phantom Gaming Radeon RX 570 8GB OC. This is a dual-fan cooler design with a plastic shroud in black with white accents, a massive heatsink, a full-coverage backplate, double ball bearing fans, composite grooved copper heatpipes, and a single 8-pin PCIe PEG connector, which simplifies cable management. Out of the box, base clock speeds are 1280MHz for the GPU core and 1750MHz for the memory. The OC mode pushes that up to 1331MHz for the GPU and 1820MHz for the memory. That’s pushing into the same territory as Sapphire’s Nitro+ series, and it’s definitely going to give ASUS and Gigabyte a run for their money.

Lastly, theres the Phantom Gaming RX 580 8GB OC. It shares a cooler and backplate with the RX 570 8GB OC, so the only thing holding it back would be the performance of the cooler. Base clock speeds are set at 1380MHz for the GPU and 2000MHz for the memory, already putting this card into the top ten list of RX 580 variants worldwide. OC Mode raises clock speeds to 1435MHz for the GPU and 2020MHz for the memory. This makes it the fastest RX 580 out of the box without considering other variants which might have their own OC Mode, and it’s an impressive and aggressive showing from ASRock. One wonders what they’ll pull out of their sleeves for AMD’s Vega family in the future. 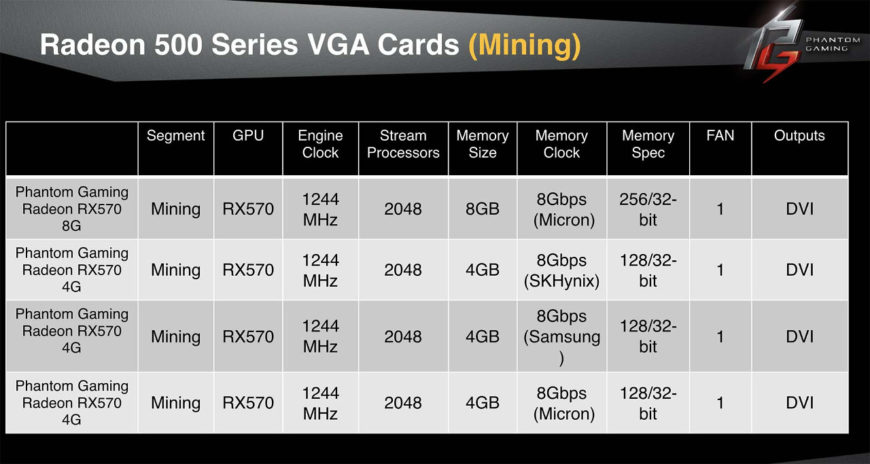 In addition to the lineup of Phantom Gaming cards for gamers, ASRock also has the Phantom Gaming Mining edition cards up for sale soon. These are Radeon RX 570 cards with specific memory chips and timings applied to them, and are sold with a single DVI-I output on the back of the card to limit their usefulness and resale in the second-hand market. No availability or price has been announced yet, but they will be demarked by special labels which tells miners which specific type of memory ships with the card.  ASRock has noted that memory allocations are difficult to guarantee for their mining lineup, as the memory market is very limited in terms of choice and availability at this point in time. 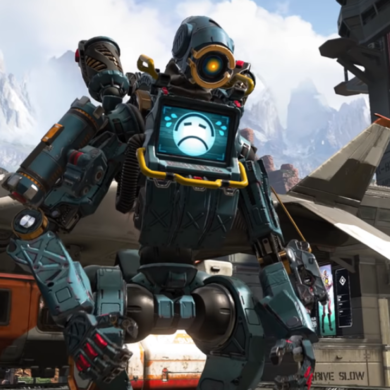 EA was experiencing a series of DDoS attacks