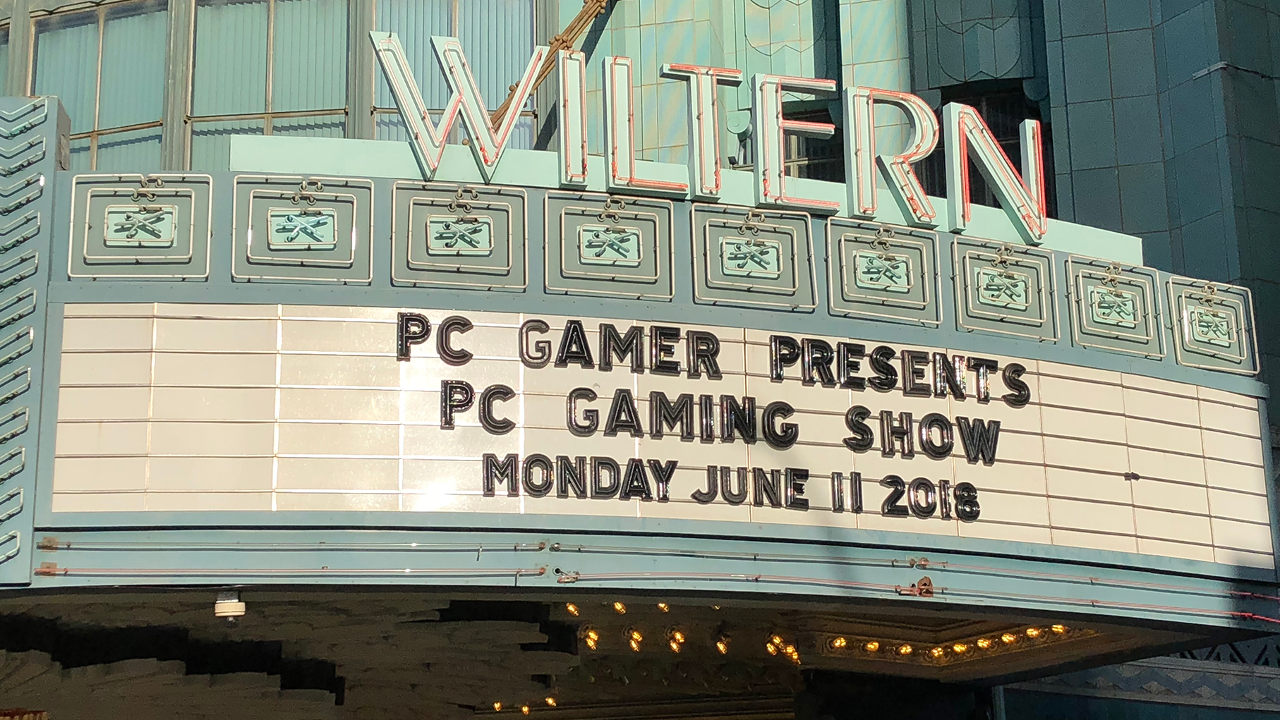 All the highlights from the PC Gaming Show 2018 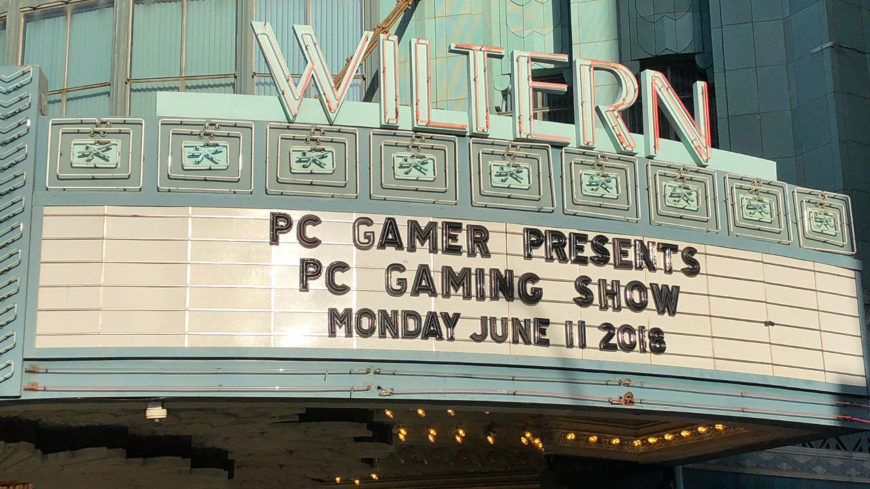 The PC Gaming Show isn’t actually an E3 show, but PC Gamer tends to schedule it right within E3 week in between all the other presentations to not clash with the rest of the show. The whole thing is focused on PC gamers and PC gaming as a whole, and that typically means inviting developers and other studios out to come talk about their projects (except for Mount and Blade II, no-one talks about that anymore). Hit the jump for more.

Satisfactory is both a game and a play on words

Okay, so take Factorio, but replace the pixel art with the Unreal engine, and give it a first-person mode. Then add in multiplayer, dune buggies, and suits that make you look like a member of Daft Punk. Satisfactory is made by Coffee Stain Studios who are based in Sweden, known for the Sanctum series and Goat Simulator. Satisfactory is set for a Windows PC release in 2018, an an alpha test phase will be going up soon. You can sign up on the official website here.

I have this wild theory that Goat Simulator helped make the company so much money that it helped fund all their future developments.

Neo Cab shows us that revolutions start with cab drivers

In Neo Cab, you’re a driver for a cab company slowly seeing irrelevance with the age of automation, and it’s turned into a ridesharing service. You have to ferry people around the city, and they’ll rate you according to the drive, their interactions with you, and the kind of conversation you hold with them. In the middle of the normal duties, you meet the resistance leaders fighting against Capra.

Mavericks: Proving Grounds might be the next big Royale game

So it’s battle royale, but here’s the twist: there are 1,000 players on the same server. The game features destructive environments, fully modeled buildings that can be collapsed, and the huge amount of players allows for factions to come together organically, because it’s easier to form a team of ten players when the pool for potential partners is that much larger. Mavericks will be going through its first invite-only closed beta this year, and you can sign up via this link to also grab some E3-themed content before 17 June 2018.

Originally a mod for The Elder Scrolls: Skyrim, The Forgotten City was turned into a fully fledged game with a focus on the narrative. Players find themselves in a small city that was cursed with a very particular trigger: if anyone sins, everyone dies. Luckily you don’t share their fate, but you do get access to a portal backwards in time that allows you to relive the day everyone died over and over again until you solve the puzzle. The indie team producing this, Modern Storyteller, is based in Australia and produced their first game with help from the Victoria State government subsidies for film and animation studios. The Forgotten City will launch in 2019 and is available for wishlisting on Steam.

The first Star Control launched in 1990, and looked a bit like a Galaxian clone with some added bits to it, and couch co-op. The series saw a number of releases until the company behind the games, Toys for Bob, was acquired by Stardock in 2006. In that time, the studio had had several issues with Sega and Accolade Games, and StarCon, the fourth game in the series, was scheduled for cancellation. Star Control: Origins picks things up and returns to the first game’s universe. The older games in the series worked on the idea of planet exploration, and Origins finally allows for this to happen in fully modeled 3D environments. Star Control: Origins launches on 20 September 2018, and is available on Steam, Stardock’s website, and GoG.com.

Hunt: Showdown is a competitive shooter where you play a bounty hunter tasked with tracking down and killing monsters of all shapes and sizes. Warewolves? Check. Wendigo? Check. Swamp things? Check. But you’re not alone, because other hunters are competing with you, and may also shoot you in the back to take all your money and loot. Hunt: Showdown launched last year and is developed by Crytek Studios. The coming content update also adds new servers in Asia, content localisation, an enormous amount of bug fixes, and further optimisation of the CryEngine. The game is still in early access on Steam.

Archangel: Hellfire is a VR game with giant mechs

The Sinking City is an open-world Lovecraftian horror

Developed by Frogwares Games, The Sinking City is a detective adventure set in 1920, where players find that Oakmont Massachusetts, New England is besieged by floodwaters caused by a supernatural something. In addition to the problem of a city being flooded at a moment’s notice, you’ll also have to worry about the mental health of your character and that of the city’s inhabitants, lest they go mad and try to kill everyone in sight. The Sinking City is set for a 2019 release.

Warframe: The Sacrifice is another free story expansion

Warframe arguably does the MMO thing quite well compared to others, and it does it whilst also remaining free to play and rewarding for users who don’t use microtransactions. The game’s latest expansion is The Sacrifice, a new addition to the story behind the Tenno, as well as who created them. Are you ready for a sacrifice?

You play a shark in Maneater. You do sharky things. You’re a sneaky shark. You can make people scream. Om nom nom nom. This is the first game in recent history where this meme makes sense.

Bravery Network Online is a different take on turn-based combat

So take the concept of a four-move turn-based combat game and limit it to an arena, and make it 2.5D with characters that are hand-drawn. This is the basis of Bravery Network Online, an online multiplayer combat game where your characters can be leveled up and made to fight against each other. There isn’t much else known about the game, but developers Gloam Collective promise to reveal more later this year.

Gloam Collective is also responsible for two other games shown at the PC Gaming Show – Morning Star is a first-person thriller where your character is stuck inside a computer simulation that has you farming turnips endlessly, while Overwhelm is a pixelart-based 2D shoot-em-up.

Presumably made to give them something else to do other than Marvel’s Spider-Man, Stormland is an open-world VR title for PC and the Oculus Rift platform by Insomniac Games. You’re a robot gardener tending to a lush forest, and the world is suddenly interrupted by The Tempest, a being of incredible power that ends up changing the entire landscape of the planet bit by bit.

I’m not saying that Night Call is cribbing on Neo Cab, but you have to admit the two games have extremely similar set-ups on the surface. In Night Call, you’re a taxi driver who just wants to pay his bills, but gets involved in a criminal sting operation because you were the last person to see a recent murder victim alive – and there are more murders just like that one happening all over the city.

Sable is a lonely, lonely game

Sable is a cell-shaded single-player exploration game where you’re all alone on a planet, able to explore its depths and learn its mysteries. The aim of the game is to explore and figure out where all the nomadic tribes that used to roam the planet disappeared to, and why. The game’s music is composed by Japanese Breakfast, aka Michelle Zauner, whose music and art style is quite haunting.

Star Citizen appears, just to remind you it hasn’t launched yet

I mean, when can we actually buy the game and not an extended alpha release? Roberts Space Industries has been developing Star Citizen since late 2011. Although this trailer is for the Alpha 3.2 release, there is some content that might only come much later, time depending.

And maybe a bit of DOOM as well. And there’s some inspiration from FTL. Launching on 4 September 2018, Genesis Alpha One will be available on Windows PC, PlayStation 4, and Xbox One platforms.

The Don’t Starve series takes a sharp turn and plonks Wilson in a jungle close to a city inhabited by aristocratic Pigmen, who have a history that’s not as rosy as it appears at first glance. Klei Entertainment hasn’t said whether the game’s title is a reference to the Shakespeare play, but wouldn’t that be so neat if it did? Don’t Starve: Hamlet will launch sometime in December 2018.

Overkill’s game is based on the comics and not the TV series, which means that we don’t have to deal with Negan and Lucille, or Carl, or anything that happens in season 8. Overkill’s The Walking Dead is a co-op multiplayer survival game where you and your friends need to defend themselves and survive to fight another day.

Noita is a pixelart game with a pixel-based physics engine

Noita might be an interesting game for its roguelike makeup and sophisticated platforming gameplay, but the real trick to its appeal is the fact that it has a physically-based physics engine. Every pixel can be destroyed, and this makes for interesting situations where you have to blow up bridges, set things on fire, or sneak your way around enemies by making shortcuts. The world is also procedurally generated, so no two games will be alike.

I WANT THIS IN MY VEINS NAOW! I loved Theme Hospital.

Available now in an open alpha, Realm Royale takes the battle royale formula and adds extra twists to it. Notably, you have to forge your own super weapons in the game, but while you’re forging your character is vulnerable to attack. There’s more to this game than this trailer can show off, and it’s also being developed by Hi-Rez studios, makers of Smite, Paladins, and Tribes: Ascend.

Although Ubisoft showed off Anno 1800 at Gamescom 2017, it’s been rather quiet on that front. For the first time, the publisher made an appearance at PC Gaming Show, revealing not just the game itself but also something called Anno Union, a player-driven feedback and testing programme where skilled Anno players can help iron out the game’s strategies and tactics together with the developers. This is the first Anno game driven by player feedback, so it’ll be interesting to see how the community’s input helped shape the game. Anno 1800 is due to launch in late 2018 on the Windows PC platform.

A record three battle royale games were announced during PC Gaming Show 2018, and Rapture Rejects was the last one. This is a 2D top-down baytle royale game based on the Cynanide and Happiness comics and art style. The Rapture happens, and the rest of earth’s inhabitants are left to fend for themselves.

The world didn’t ask for a Hitman sequel, it deserved one. 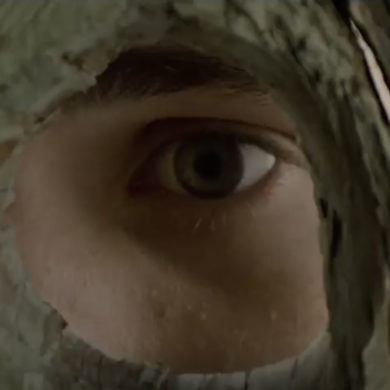