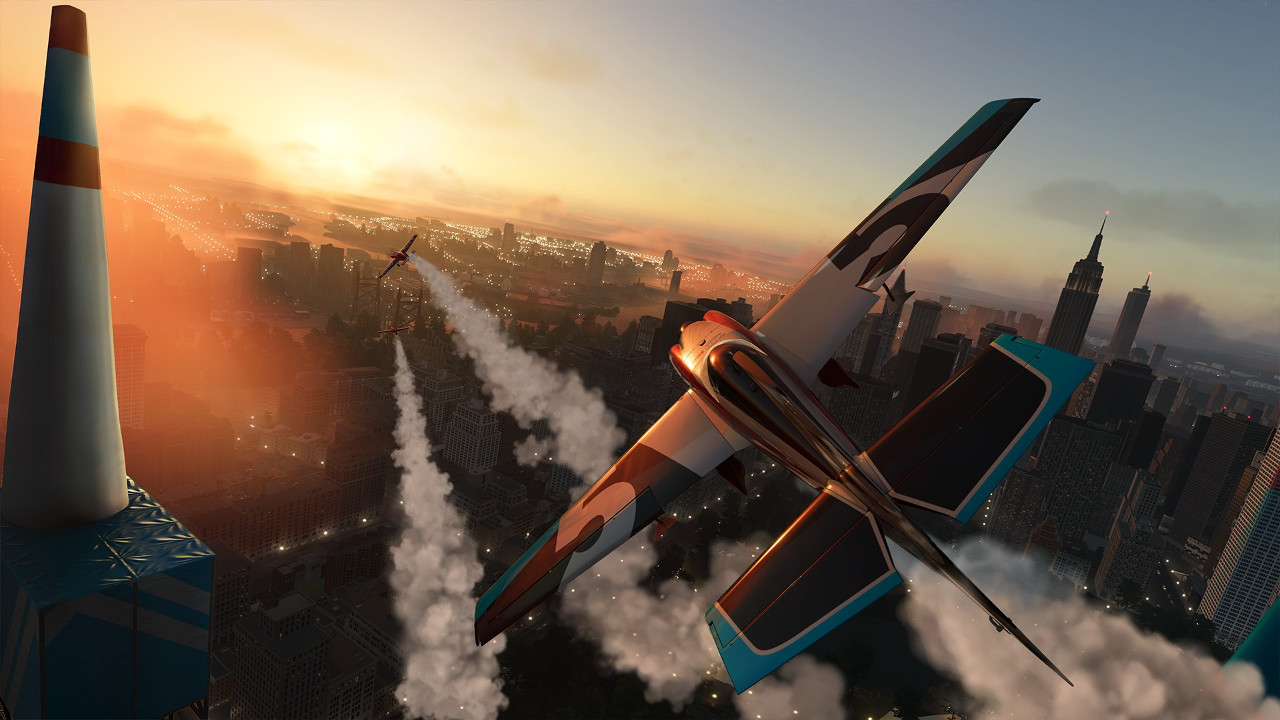 In The Crew 2, it doesn’t matter if you win by an inch or a mile 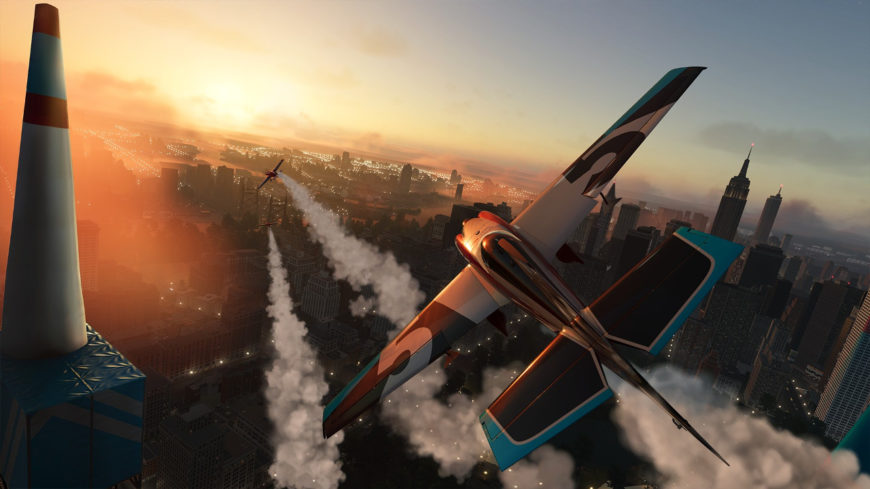 Ahead of the release of Ubisoft’s The Crew 2, I signed up for the closed alpha, closed beta, and open beta tests to get a feel for the game before launch. I had previously only tested the game in a controlled demo environment at expos, and at that point I wasn’t really impressed. The controls were sluggish, the game didn’t run perfectly, and although I liked the premise, there just wasn’t enough to draw me in. I’ve had about a month’s worth of gameplay accumulated through the tests and I’d like to share my impressions with you, both as a fan of The Crew and a racing game enthusiast in general.

Flying in The Crew 2 is literally the best experience in the game. It beats out the regular driving and boating sessions by far, and only riding a motorbike comes close enough. The controls for the rudders on my Xbox 360 controller are still a bit iffy for my tastes, but this is more because the response isn’t quick enough. Banking, doing loops, knifing, or pulling off complicated manoeuvres like the Immelman Turn or a lag displacement roll are difficult to master, and I still feel like the controls could be a little tighter.

That said, just mucking about is the most fun you can have with a plane. Finding airports dotted across the map allows you to practise landing, and taking off is a lot of fun. As you approach take-off speed, you hear things rattle, the road noise increases, and you can almost feel the plane become lighter. Crank up the volume and the engine noise can become deafening, make the smallest mistake and you’re on your way to the nearest pole or embankment.

Once you’re up in the air, you begin to notice the little things. All the dials work, for starters. Things rattle a bit when making turns. The camera controls are a little restrictive, but you can look around and up. Ivory Tower says they’ll include joystick support from launch, covering peripherals like the Logitech Extreme 3D Pro, or the Hotas 4 Flight Stick from Thrustmaster. With better controls, I think this could give pilots a significant edge over others. I wouldn’t attempt flying in formation otherwise, even with precise input from a mouse. 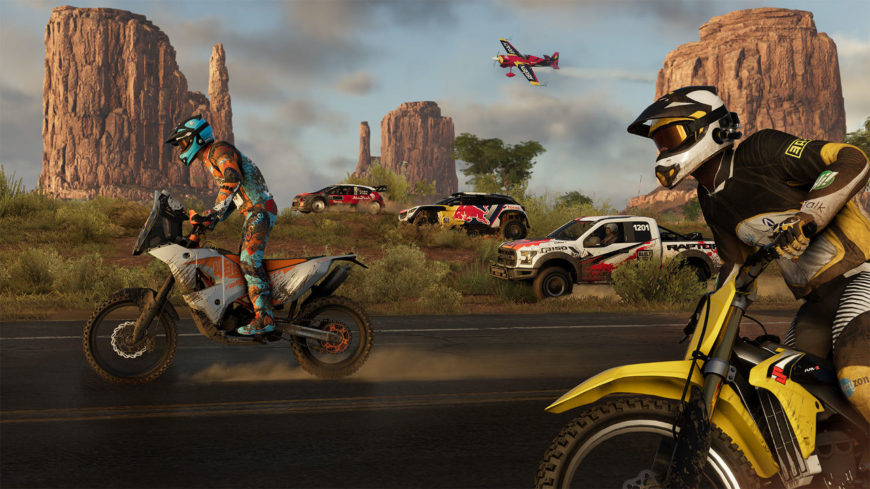 The second best experience in the game is riding motorcycles. Compared to the first game, the controls are tighter and the bikes are more responsive, and this makes zipping through traffic and trees a lot of fun. You can do some tricks in the game like wheelies or riding on the front tyre, but this isn’t anything like Trials Fusion.

The bike races are always fun, if a little annoying with how little space you have to manoeuvre. One of the first bike races in the alpha and beta stages was a race on a Harley Davidson chopper-like bike which easily weighs 350 kilos without the rider. It’s tough to judge speed and distance when you’re in the helmet view, especially with the visor blocking your view or reflecting sunlight glare, but once you’ve figured out that you have to constantly shift the bike back to a neutral position before taking the next corner, it gets easier.

I didn’t devote a lot of time to the motorbike segment despite it being so much fun because this game has a lot to offer, and switching between boats, planes, bikes, and cars means that you’ll never really be able to stick to that one thing you like for too long.

A while back I submitted some feedback to the Ubisoft forums about one particular race I was trying to finish. I had already completed it, but I didn’t complete it while my favourite song was playing. Naturally, I restarted the game and spent the next 10 minutes dealing with the music controls to try get “Open Road” by Delta Thieves playing again. Once I had it playing with my race restarted, it was pure nirvana barreling down steep hills trying to control a heavy muscle car at high speed. Driving in the game is better than the original, but still harkens back to the days when most of the Ivory Tower team was working on the Test Drive series. Cars still skid more often than they should, drifting is hard to initiate, and at high speed you have to be careful with the controls, which aren’t too sensitive by default.

Because driving is a big component of the game’s main campaign and experience, this is where I spent most of my time. You can still explore the world freely as The Crew allowed, and you can still take a Porsche 911 GT3 off-road if you want. It’s not recommended, but the option is there. Dotted throughout the world are driving challenges that you can take part in, whether they be speed challenges or escaping an imaginary radar scan by the police (I like to think of this one as actually a nuclear blast, and you’re outrunning the explosion and radiation). Sometimes spending a few minutes doing these challenges and successfully getting to higher levels will reward you in better loot, and I do recommend doing a bunch of these before tackling the real races. The benefits of that suspension upgrade can’t be overstated if you’re playing against other players.

As before, The Crew 2 also features drop-in, drop-out multiplayer. It’s a better experience than the first game, and it’s still largely server-client based instead of peer to peer. However, it is frustrating that other players who misbehave on the track do not get penalised in terms of time added to their score, or force slowdowns. A little bit of bumper-cars is fine on a wide road with the option for correcting a mistake, but on a narrow mountain pass or a racing track you can get bumped off pretty quickly. 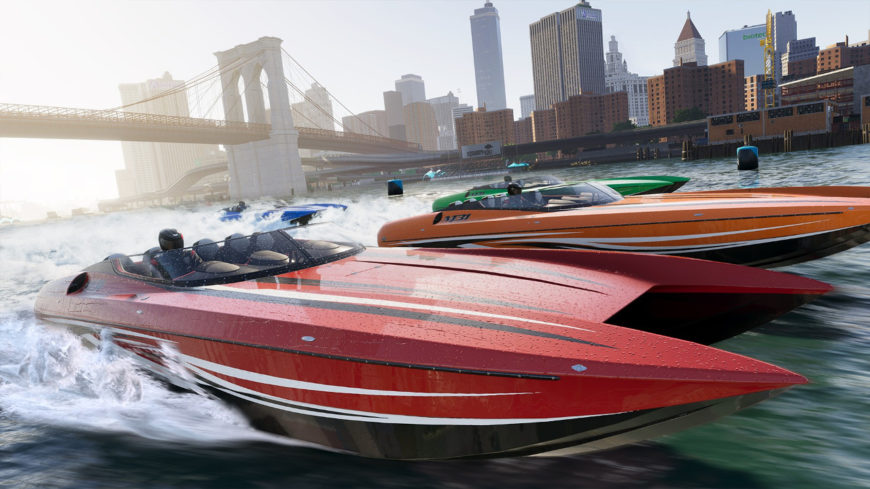 The boat races are another component that’s new to the series, and it’s fun once you get the hang of it, though it didn’t really appeal to me personally. The boats are more difficult to control than bikes or planes, and the slight lag in the controls means that you’ll have to compensate for a lack of control when on the water, which is already a bit of a challenge to master.

And the controls really make or break the experience for you if you’re a boat racing enthusiast. The sense of speed is great and the boats themselves look and sound great. There is, however, no fine-grained control over the rudder, and there’s no easy way to perform high-speed turns without slowing down a bit to gain control. I could just be used to the controls from Grand Theft Auto Online, but I feel that the boating experience is where the bulk of the team’s attention needs to be given once the game launches.

As for the boats themselves, there are limited customisation options for skins and paint styles, and I didn’t see anything to do with changing the interiors. There are some performance upgrades, but I didn’t get too deep into the boating overall. 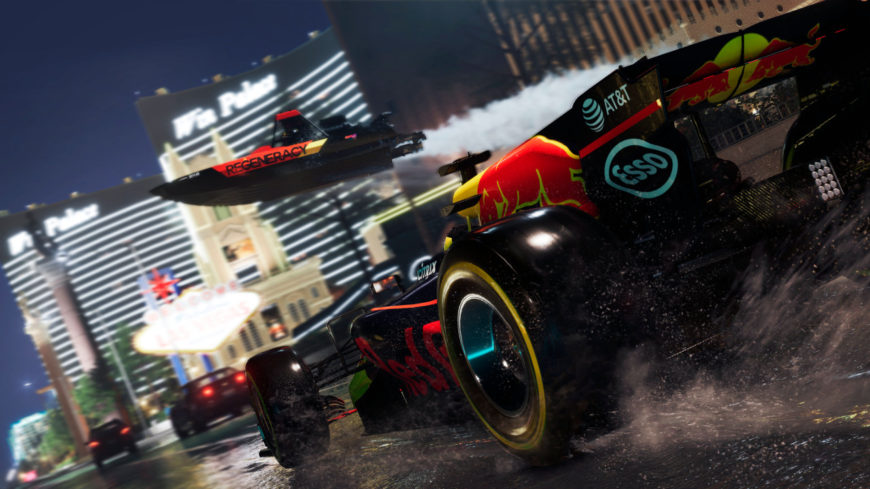 As for the rest of the game, there’s a few things that need to be highlighted before you pre-order or purchase the game on launch day. First, there are no loot boxes, at least none that I encountered. There is a bit of RNG involved through the random prizes you’re given as rewards, but unlike The Crew it isn’t possible to get duplicates of mods you’ve already earned. You’re always given something that’s faster than the upgraded part you had before, which means that there’s always a benefit to the grind. XP and credits are always earned too, as expected.

The AI rubberbands quite a bit, and this makes recovering from mistakes very difficult. The AI either stays in a group when it’s behind you, or it stays ahead of you for some time before gradually slowing to a pace that allows you to catch up to them. Running into the tiniest rock or pole spells disaster for players in a fast-paced race, and this only gets worse with higher-speed cars and tracks. Prepare to restart several times while trying to learn a new track.

The storyline is there, but it’s subtle. Similarly to the 2015 Need for Speed reboot, your character is a newbie entering into a legal extreme sports league that replaces illegal street racing, and you have to win races and perform well to gain followers on social media, which the game calls “fans”. Fans help you progress through the campaign, and also affect dialogue with some of the NPCs you encounter along the way. It’s far less annoying than the first game’s story, but it also doesn’t give you a lot of incentive to complete the main campaign. Need for Speed Prostreet had a similar idea, but at least you could see all the way to the end what the goal was: becoming the Street King. With The Crew 2, I’m not sure what the end goal really is. Fame and fortune aren’t motivation enough for players to continue with the main campaign.

That’s all from the hands-on for now! The Crew 2 launches on 29 June 2018 on Windows PC, PlayStation 4, and Xbox One platforms, and there are pre-order incentives if you must get the game early. Players who pre-order get to pre-load the game and start playing as the launch window opens. 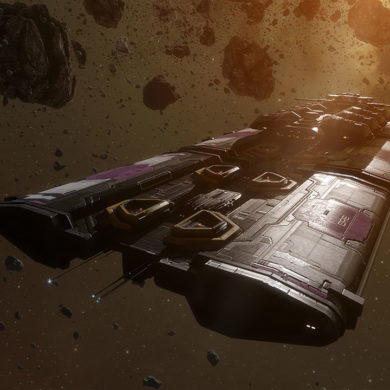