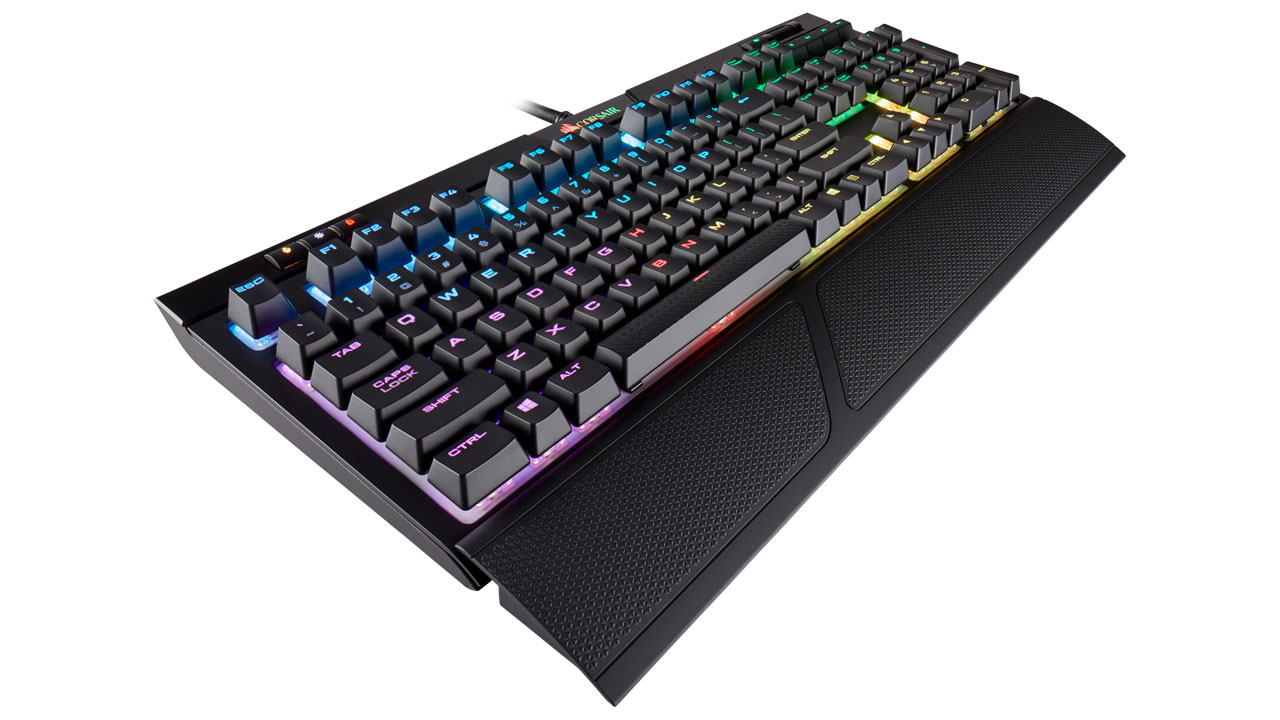 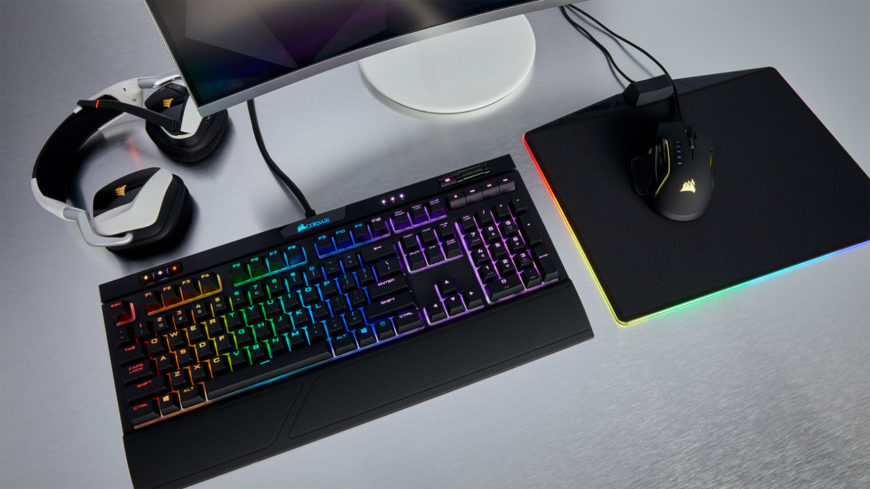 It’s no secret that I’m an unashamed fan of Corsair products. While not everything the company makes is truly great, enough of their products are that it’s become a brand that I readily identify with, and whose products I’ll happily buy when given the choice. There’s a certain draw I have to Corsair’s creations, and the same goes for their company messaging and brand identity.

The thoughts above may seem out of place in a review, but they’re important to note, if only because every reviewer (every person, really) has a preference of sorts. This is especially important to be cognisant of when examining a product from a manufacturer to which you are especially partial.

I’m not even close to anything that would resemble a competent player of FPS or MOBA games, but I can still appreciate a good quality keyboard, and for the longest time the Corsair STRAFE RGB has been my keyboard of choice. As a result, I tend to lean heavily towards anything that’s similar to the STRAFE. You can imagine my intrigue at the announcement of a second version of the STRAFE, appropriately dubbed the MK.2. I hoped it’d be a keyboard that’d embody everything I like about the original, while adding more features and refining the existing ones.

That’s easier said than done when you consider that we’re talking about a PC keyboard here. Things would be far simpler if we were still living in 2015 – but we’re not, and since then the peripherals market has evolved somewhat. By and large, almost all offerings from all sorts of peripherals vendors have improved. The competition is stiffer than ever, and the sheer volume of options is enough to present a challenge on its own, even to household names like Corsair.

So, how does one go about making a good keyboard even better? Corsair has given this a valiant shot that’s culminated in a number of relatively minor changes, but all of which collectively make this a better keyboard than its predecessor.

The first of these changes relates to the LED backlighting. I recently spent some time with a similarly priced gaming keyboard and I must admit, the difference in LED brightness between that keyboard and the STRAFE RGB MK.2 is night and day. In fact, if my eyes aren’t deceiving me, the MK.2 is even brighter than the original model, and the colours are distinct enough to make even the most subtle lighting themes workable.

For instance, the colour white is better represented and even though there’s still some bleed and cloudiness from the base, it’s a vast improvement over the original model. I don’t think I’ve seen or used a keyboard with brighter LEDs. While turning everything into a rainbow light show doesn’t appeal to me in the slightest, I can fully appreciate just how superior the lighting on this keyboard is, even compared to the mighty Corsair K95 RGB Platinum. The STRAFE MK.2 is simply better at handling lighting colours. 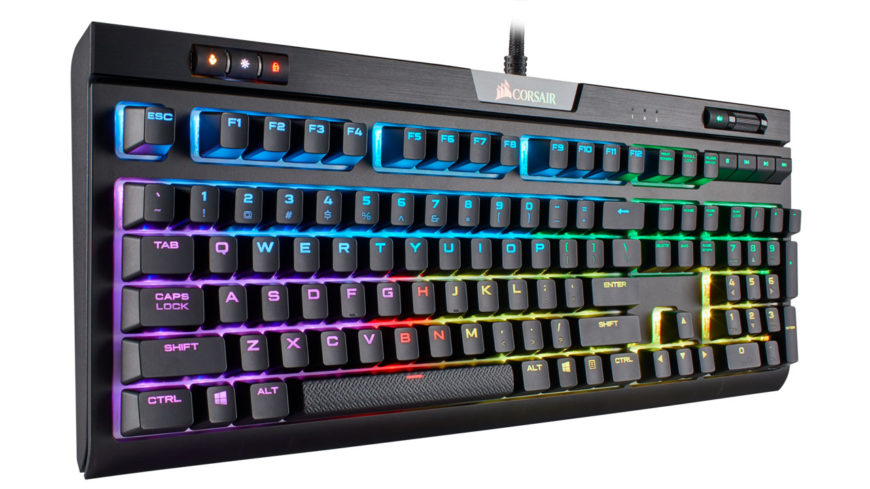 RGB lighting alone does not make a great gaming keyboard, and the STRAFE MK.2 has received other upgrades, in particular where the top “bar” is concerned. Borrowing from more recent offerings, the STRAFE MK.2 looks similar to the K70 RGB (which also has a MK.2 version, which I’ll examine later), if only through the addition of the multimedia buttons (no more FN-key hassle), the scroll wheel and the three buttons on the top left. This layout is obviously familiar, but it’s so much more functional than what was on the previous model. There’s a common layout now across Corsair keyboards, which I suspect will make it a little easier in opting for yet another Corsair keyboard as and when the time comes for an upgrade (provided it hasn’t been altered by then).

There’s a certain quality about the STRAFE MK.2 which was previously missing in the 2015 model, and it’s in light of this that the included wrist rest finds itself as the weakest part of the keyboard. I understand that the rubberised, reversible kind (as found on the K95 RGB Platinum) may not be feasible, but a less plasticky option than this one is surely possible. The rest of the keyboard feels a lot sturdier and of much higher quality than the previous iteration, and by contrast the wrist rest is simply not good enough. Not only is it too short, but the material makes it easy for the bases of your palms to slip off of it, no matter the angle. It’s definitely the weakest part of this entire exercise. At this price range it should be a lot better, and Corsair should consider re-evaluating the design and choice of materials for the wrist rest, especially since they’ve improved the STRAFE RGB MK.2 in almost every other area.

That aside, no modern keyboard is complete without software, and Corsair’s iCUE comes to the rescue in its best showing to date. At the time of writing, version 3.5.111 is the latest – and I must say, it’s a massive improvement over previous iterations.

In a recent keyboard review, I wrote that the software package and user interface on offer there is superior to what Corsair provides with iCUE. This was prior to using the latest iCUE update, which has completely changed my experience. iCUE has always been a powerful software suite, but that power seemed to come at the expense of ease of use, resulting in a software package that required some commitment to fully grasp and exploit.

That isn’t the case anymore, as you can see in the screenshots. The layout is clean, succinct and intuitive. Configuring LED lighting is even simpler and assigning keys is child’s play. What’s missing is instant apply or some kind of preview as to what your keyboard will look like with the chosen lighting scheme. This omission is an insignificant issue, but it’s something that would certainly enhance a much-improved, wonderful package.

There’s so much more to this package that examining iCUE is something that needs to be done separately from a keyboard review, especially since iCUE is a large part of why the STRAFE RGB MK.2 is such a compelling keyboard.

Finally, let’s talk about how the keyboard feels and what it’s like to use. As stated previously, the original STRAFE was my favourite keyboard for the longest time, and its Cherry MX Silent switches were not only friendly to people around me, but I lost nothing in terms of tactile feedback compared to more traditional switches. Professional and other highly trained gamers would probably be able to tell the difference between and find favour in different switch types – but as far as I’m concerned, these are the best of the entire lot. There’s just enough resistance and travel to increase my confidence without sacrificing much of anything else. When using this keyboard, I can not only type faster but I literally play games more comfortably as well, especially when compared to using Red, Green, Blue or Black MX switches. It could perhaps be the STRAFE MK.2 giving me a false representation of this switch’s capabilities, but I’m certainly at home with the MX Silent switch, especially on the STRAFE MK.2. 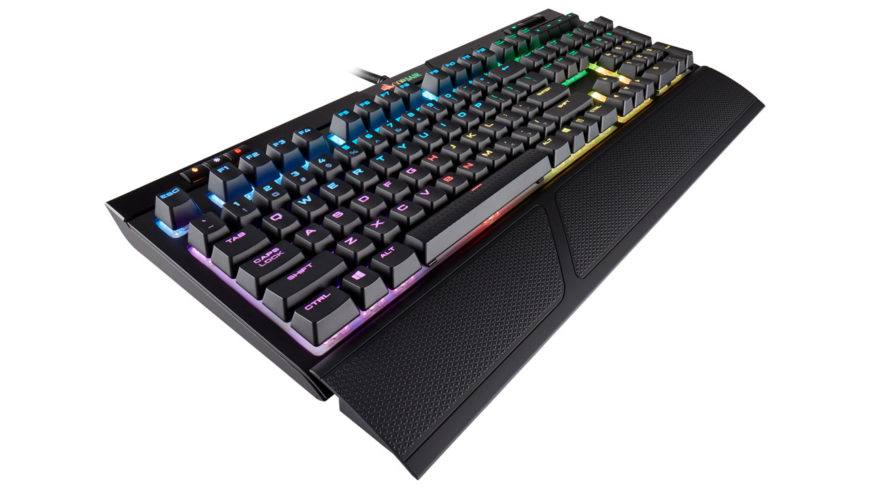 At this price, this isn’t a budget or even mid-range keyboard. It’s for those who aren’t willing to compromise on much (or anything really) and have the money to maintain such preferences. Is it a K95 RGB Platinum beater? Perhaps not, but I’d wager that the price difference between these two keyboards is far greater than the material differences between them.

I’m as impressed (if not more so) as I was three years ago with the original STRAFE. Corsair has done well with the MK.2 and they’ve retained largely the same price point, making it an even better deal than the original model was. The only thing I’d knock down the score for is the palm rest. Outside of that, I like this keyboard and would certainly recommend it, even if you’re not in the market – because chances are it’s a better keyboard than the one you’re using right now.

9Corsair’s STRAFE RGB MK.2 is every bit as good as the original and more. It borrows so much from the higher-end models in the family, while retaining and improving everything that made the original so appealing. This is one of the finest keyboards money can buy. 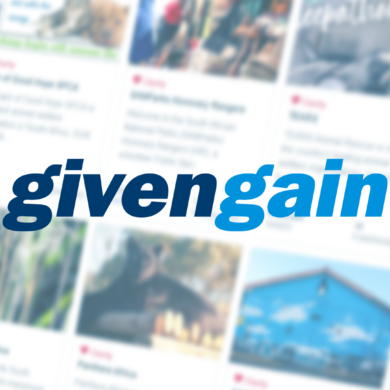