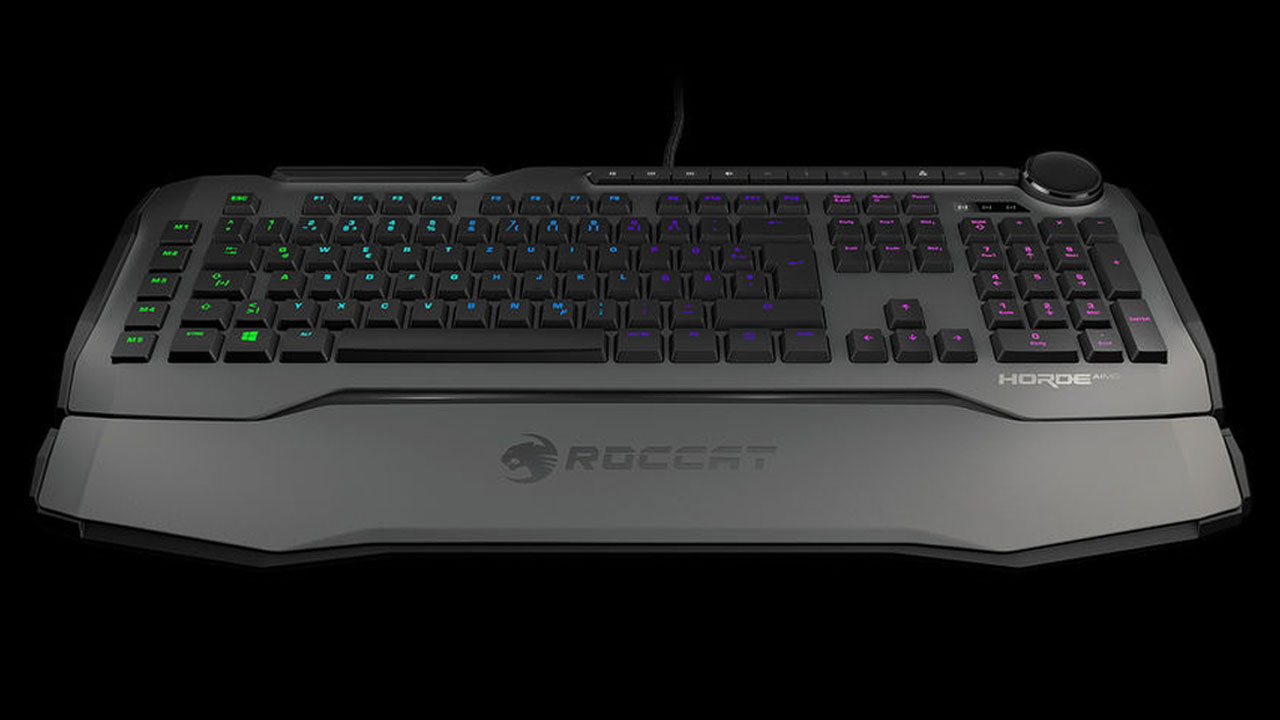 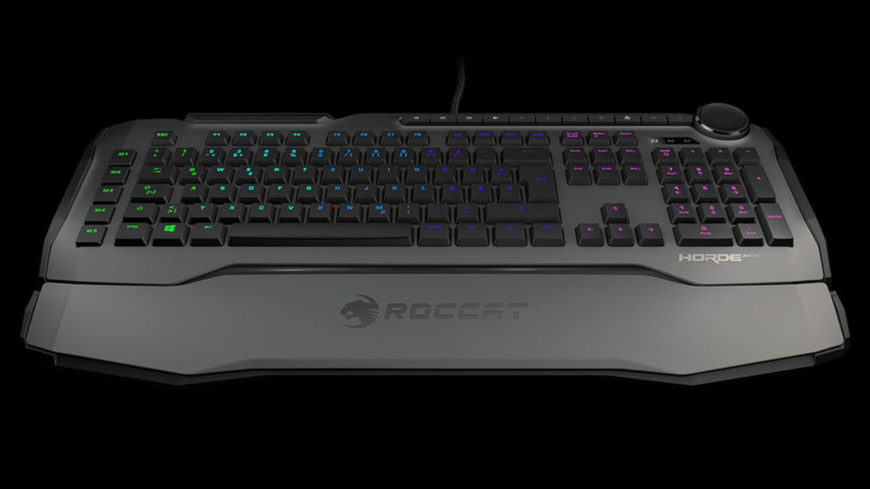 With so many gaming keyboards on the market, the standard by which these peripherals are measured has been raised significantly. It’s no longer enough to just throw together a generic keyboard with mechanical switches. It also isn’t enough to simply have an outlandish design that for some inexplicable reason is supposed to appeal to the ever-elusive “gamer”.

We’re in a space right now where many vendors are competing by either including more and more absurd lighting schemes, or some form of overstated key switch which promises a competitive advantage, or as many macro keys as there are numbers and letters on the keyboard (to be fair, that’s less of an issue these days than it’s been in the past).

Such design tactics may have been acceptable before, but considering where I am now in my life and the number of keyboards I’ve used and tested over the years, those sorts of gimmicks have lost their appeal. Instead, it’s the execution of all of the above factors that’s become the deciding factor for me. After all, at its core, the keyboard hasn’t changed all that much since it first showed up decades ago.

The ROCCAT Horde Aimo is one of the few remaining mid- to high-end keyboards that still use a membrane – or more accurately “membranical” switches. This is obviously not a real word, but ROCCAT uses this amalgamation to readily distinguish the Horde Aimo from the traditional membrane and mechanical keyboards offered by countless vendors. 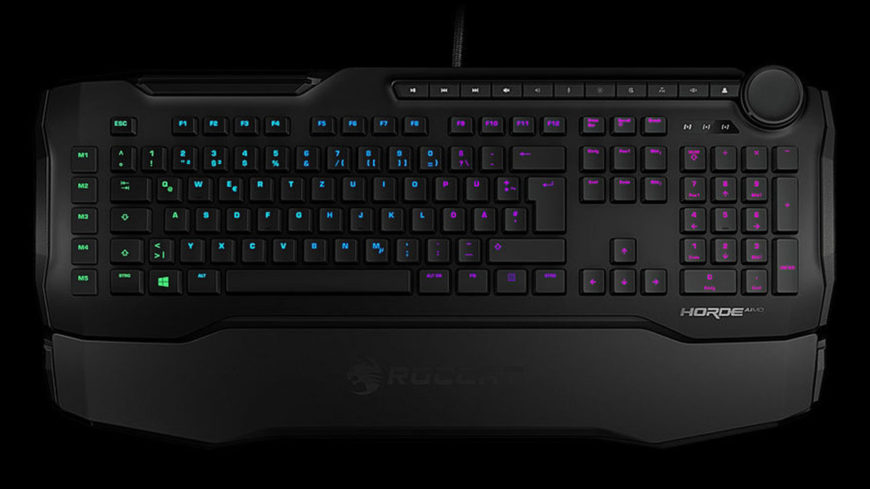 They claim that these membranical keys retain the key-press distinction and precision you get from mechanical switches, with none of the excessive noise. The membranical key presses are quicker at a claimed 7.8ms compared to the 9ms of a typical membrane keyboard. The Horde Aimo is aimed at those who’re opposed to mechanical keys, but don’t want to deal with mushy, generic key presses. To this end and for that particular purpose, I think ROCCAT has succeeded.

The key press is definitely on the softer side, but there’s no mistaking the actuation point. Pushing down offers some initial resistance, then it’s linear travel all the way down. The spacebar doesn’t seem to have received the membranical treatment though, as it feels more like a traditional membrane key. It’s not a major issue, because the spacebar’s key press is distinct and deliberate enough that it’s unlikely to be of major concern for the vast majority of users. It isn’t to me, at least.

I’m unsure why this decision was made, but it certainly doesn’t detract from the overall tactile feel that’s certain to grow on you. You can type away on this keyboard as fast as you would on a mechanical, retaining close to the same level of accuracy, but with significantly reduced noise. To put it in perspective, it’s still quieter than the Silent switches from Cherry, and that’s saying a lot.

Switches alone aren’t enough to make a keyboard great, and as far as tactile feel is concerned, I’m more than happy with what ROCCAT has provided. It won’t be for everyone, but I certainly wouldn’t be opposed to using this keyboard for my gaming going forward. Insofar as the “gaming” side of this keyboard goes, the Horde Aimo is more than capable.

Moving on to the “Aimo” bit (which is the name of ROCCAT’s universal lighting system), it currently spans three device types: keyboards, mice and headsets. There are only three products with the Aimo lighting scheme at present, but when they’re used together, they’re capable of generating some charming lighting effects. These devices aren’t sold as a single package, but if you’ve already committed to one of the other Aimo peripherals, you may as well commit to the rest as well, to get the full effect.

Given that Aimo deals with advanced lighting features and functionality, it’s odd that the Horde Aimo doesn’t support per-key lighting configurations. Instead the lighting is per region (of which there are six), which means your customisation options are rather limited, even though you can independently illuminate each of these regions using any colour.

Another unexpected property of the lighting is the low luminance level. The lighting could certainly do with a little more brightness – especially during the day, where you can barely tell the lighting is on. These lighting issues are without a doubt the most underwhelming aspects of the Horde Aimo, which is an otherwise fantastic keyboard. They’re not deal-breaking flaws, but given that this is specifically the Aimo version of the Horde, I was expecting better in the lighting department. One could overlook the dim LEDs (or light obfuscating keys – I’m not sure what the cause of the dim lighting is), but the lack of per-key lighting is a more serious shortcoming. Hopefully it’ll be addressed in a future iteration.

That said, those are literally the only aspects of this keyboard that prevent it from being a near-perfect specimen. I lament the absence of a USB hub as well, as that’s another feature I’d expect at this price point. 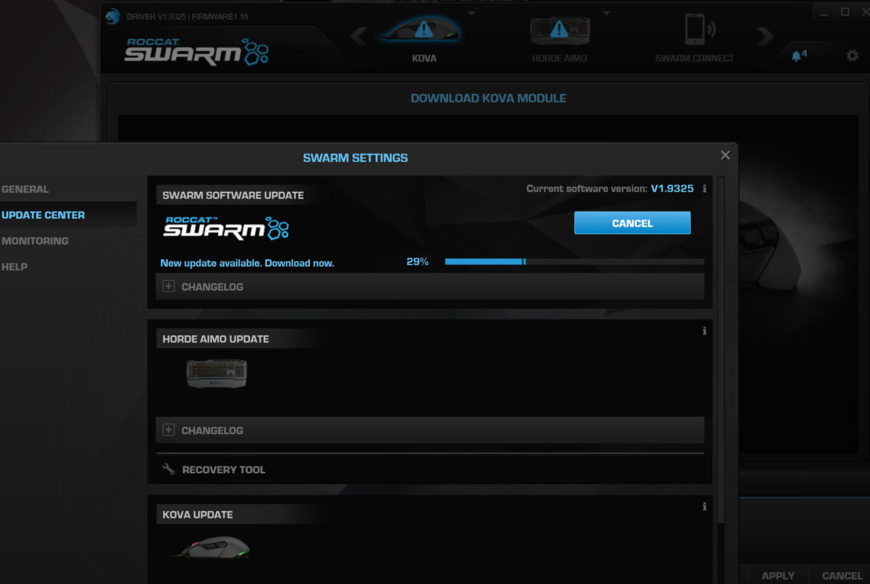 Barring these issues, the Horde Aimo is quite compelling. Aesthetically it’s remarkable, and I’d say its contoured design places it amongst the most eye-pleasing keyboards I’ve seen. Its sculpted angular lines help it stand head and shoulders above so many others. This sculpting also serves to hide the actual size of the keyboard, making it look slender and graceful. The tuning wheel (which is programmable, but adjusts volume as the default function) makes it look even better. It works as you’d expect, notched slightly but mostly smooth. The multimedia keys to the left of the wheel are easy enough to use and retain the membranical tactile feel, but offer even more resistance. Mixed in with these buttons are other keyboard controls, which adjust lighting, cycle through saved profiles and more.

Special mention must be made of the wrist/palm rest on this keyboard. Like the rest of the keyboard it’s made of high-quality plastic, but it’s impressively comfortable – easily one of the best (if not the best) I’ve encountered. Be it intentional or otherwise, it’s a massive boost for the Horde Aimo. It also fits in well aesthetically with the main body, instead of just looking like a rectangular attachment, as is the case with so many others.

Where software is concerned, we’re dealing with the familiar ROCCAT Swarm. It’s definitely more intuitive to use than Corsair’s iCUE, but it also boasts less functionality. Regardless, I’m definitely more partial to this kind of user interface. It’s stunningly simple, allowing you to get to grips with all the keyboard’s functionality and configuration options almost instantly. Updating the software and firmware on all your ROCCAT devices is also incredibly easy. It’s truly impressive and definitely one of the best user interfaces I’ve seen for any peripheral.

As far as pricing goes, local pricing is a little difficult to nail down (hence the TBA), but the US dollar pricing is roughly $90 – making this a budget to mid-range offering, as far as I’m concerned. ROCCAT doesn’t usually make budget products, but if you can find the Horde Aimo at anywhere near a fair price (i.e. less than R1,800), it’s a great purchase. It’s a solid offering, and is outstanding in ways you wouldn’t expect. It’s not perfect, but it’s a capable keyboard that’s beyond satisfying for everyday use. The lighting limitations are frustrating, but despite that I’d not hesitate to pick up one of these for my gaming rig.

8ROCCAT’s Horde Aimo is the best non-mechanical keyboard out there right now – especially thanks to how great the tactile feedback is, offering exactly what the “membranical” name suggests. The lighting leaves a bit to be desired, but other than that this is a solid offering from ROCCAT. 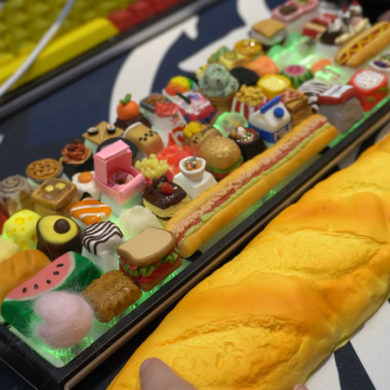 There’s a little something on your keyboard