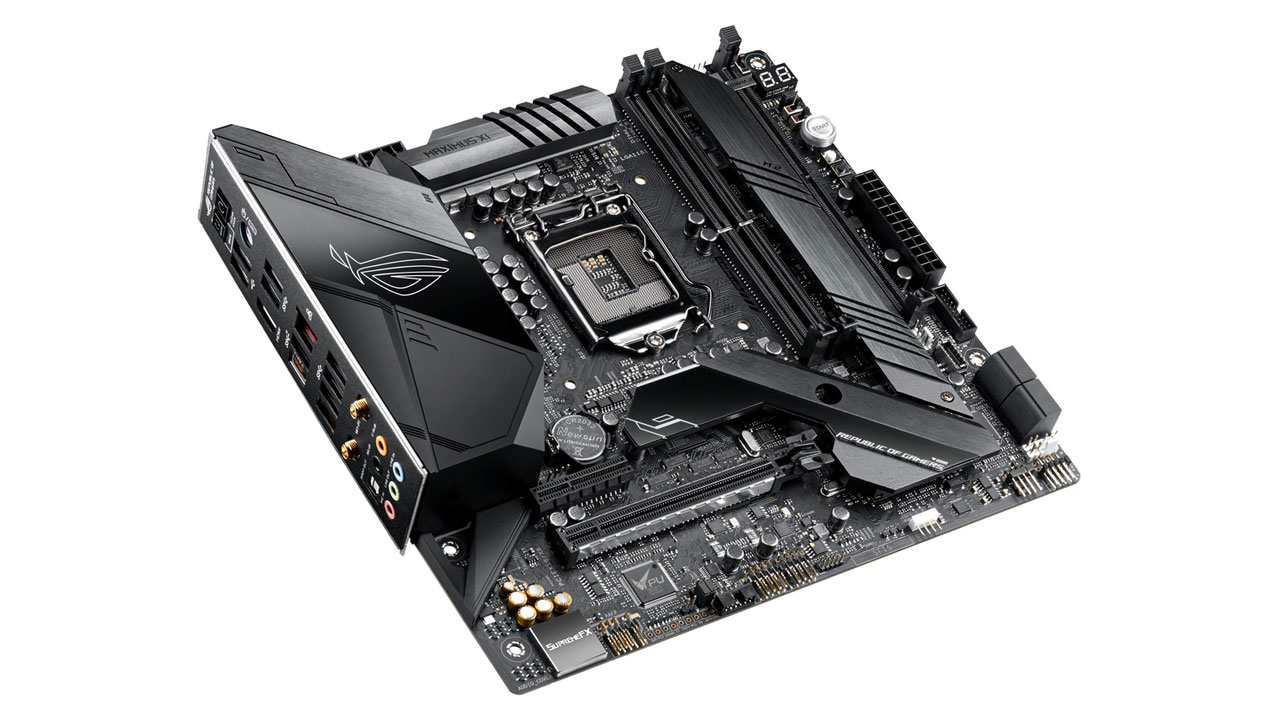 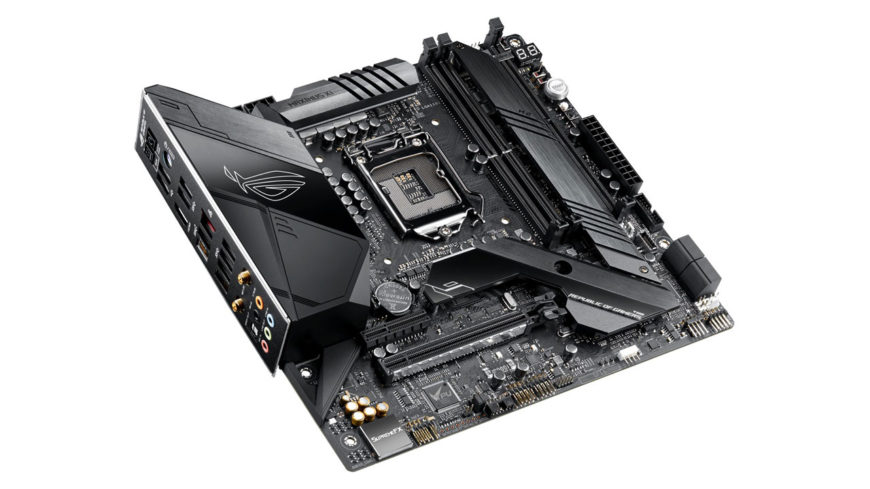 After a long hiatus, it looks as if the Maximus Gene is back – and not only that, it looks like it’s back with a vengeance. Finally, we have extreme overclocking boards in all sizes from ROG, or at least that’s what I’d like to think. Unfortunately, while the Gene is out there and available for purchase from select online stores, it looks as if this board is set to only be available in select regions, and more specifically the EU region.

It’s a real pity, because this is a fairly interesting motherboard. Even outside of its XOC (extreme overclocking) credentials (which is what I mainly care about), it represents a unique balance of overclocking capabilities, gaming capacity, and a form factor that isn’t readily available these days for whatever reason.

So, what is it then that ROG is offering with the Maximus XI Gene? Well, as with most high-end ROG products, it’s above all else performance-orientated. That’s not to say it doesn’t have all the bells and whistles that “gaming” motherboards typically have. In fact, it has all of those, but it goes the extra mile by delivering one of the most proficient overclocking boards (and it may actually be the best of the bunch) on the Z390 platform to date.

Yes, there are many highly capable boards on the market (It’s difficult to find an outright lemon these days), and some are truly exceptional. However, if you look at the current tally of overclocking records, the Gene – continuing the tradition of all previous ROG motherboards – is well ahead of any and everything else. On the day that the ninth-generation Intel Core CPUs were launched, ROG announced it had broken ten world records and 11 global first-place records, and at present it holds the highest-ever recorded frequency for an Intel Core CPU. This motherboard holds more simultaneous records than any other board in history at any given time. It’s a staggering achievement, especially considering it had to outdo some incredible products (like the Maximus X Apex) to achieve this. That alone makes it special to me, and I assume a host of other performance enthusiasts and overclockers feel the same way.

That said, most people don’t buy ROG products for overclocking activities, and for those consumers there are other features which make this an attractive board for your SFF (small form factor) or high-end gaming PC. For instance, consider the SupremeFX hardware and software suite, the connectivity options, and of course plenty of storage expansion possibilities – even within the constraints of the form factor.

As always, it’s best to tackle the audio portion first. Here we find the tried-and-tested SupremeFX implementation, featuring the ALC S1220A codec, audio circuitry shielding, Sonic Studio and Sonic Radar III software – and that’s it. It’s a surprisingly thin offering on the audio side, given that a large number of ROG boards offer similar, but generally more impressive audio credentials. This is arguably the weakest element of this motherboard, given what other boards offer at this price. It’ll most certainly do the job, but consider that ASRock’s Purity Sound 4 solution (as found on the Z390 Taichi Ultimate) is superior by all accounts – and that’s a much cheaper motherboard.

Not all is lost though, as you can easily add a discrete audio card via the board’s PCIe x4 slot. On any other microATX board, this would be a waste, but the Gene covers all its other bases so exceptionally well that there’s little use for this expansion slot outside of installing a dedicated audio card. 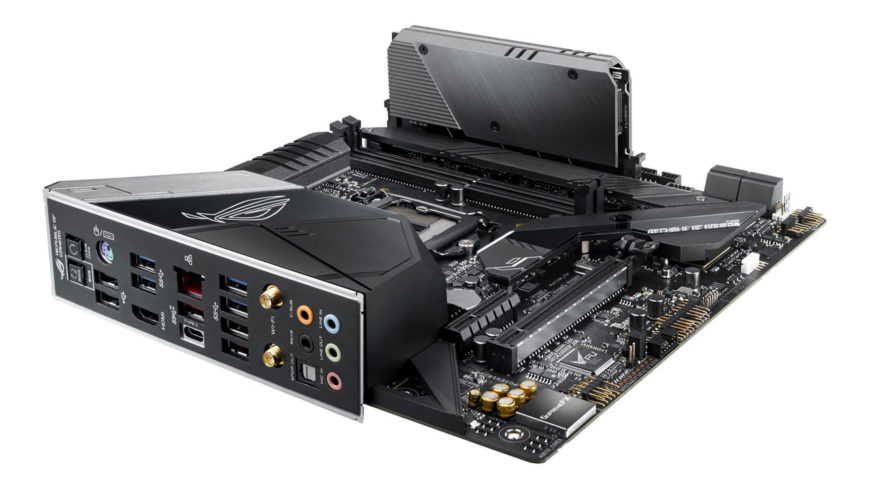 On the connectivity side it fares better, as the board not only supports Bluetooth 5.0, but Wi-Fi 5 as well. LAN connectivity is done via the familiar Intel I219-V Gigabit controller, onto which ROG’s GameFirst software has been layered for network traffic control. This software works just about as well (or as poorly, depending on your perspective) as all such software typically does. If you currently find that software like this does wonders for your gaming, then it’ll help you – but if all previous software of a similar nature hasn’t helped you in the past, this won’t change that.

So, in terms of connectivity, it’s what you’d expect from mid- to high-end motherboards. It’s nothing to complain about, but nothing out of the ordinary either. If you’re wondering about Thunderbolt 3 support, there simply isn’t any.

If at this point the Maximus XI Gene is reading like an overpriced microATX board, in some respects you may be correct. It’s not overpriced, but it’s definitely expensive. Nevertheless, there are some features and elements to the Gene which in many ways help to justify or rationalise the pricing – some cosmetic, others more substantive.

For example, despite its size, this board supports more M.2 devices/drives than most ATX and even some E-ATX boards. The Gene achieves this through two M.2 sockets on the PCB, and a further two from the ROG DIMM.2 expansion card. As usual, all have access to the full 32Gbps from the platform hubs, and with that comes the opportunity to set up some seriously fast RAID arrays. It’s a rare facility on any board, let alone a microATX one.

All of that aside, everything points back to the tuning credentials of this motherboard. It’s likely not something on which the vast majority of people will base their purchasing decision, but there’s no denying that, much like other ROG boards of late, it wields the capacity to operate the highest of high-frequency DRAM kits – even up to 4,800MT/s (2,400MHz) – such as those announced by DRAM vendors like G.Skill and Corsair.

Even if you don’t have such a high-frequency kit, you can rest assured that whatever DRAM you use is guaranteed to perform exceptionally well on this board, especially the more recent LED DRAM kits. It seems that the engineers at ROG have paid some attention to LED DRAM kits and have tuned the motherboard accordingly, so you can literally load an XMP profile and happily operate your DRAM north of 4,600MT/s. I actually have it on good authority from a DRAM vendor who’s been testing 5,000MT/s kits on the Maximus XI Gene that it seems able to handle those frequencies as well (but do note that these kits rated 4,500MT/s and higher use a different A2 PCB and a different IC layout to achieve this).

Naturally, that’s not all as the Gene – much like the ROG STRIX Z390-E Gaming motherboard I reviewed several weeks ago – is also equipped with AI Tuner. For the uninitiated, this is an intelligence-driven system which constantly monitors various aspects of your PC and gives you an estimate of how far your CPU cores, AVX and cache-line frequency can be overclocked, along with the suggested voltage settings. The longer the system is able to train, the more accurate it will be in giving you a realistic target and settings to try.

It’s a system which will continue to work even after you’ve applied the suggested settings. It’ll continuously refine the settings based on your cooling capabilities as well.

There’s no denying that most of the features here are geared towards the tweakers and those who like putting together overclocked PCs. Had this been a full-sized board at this price, it would already be good. The fact that it’s a microATX offering makes it even better.

Still, the Gene is tough to assign a score. In the South African context it’s difficult to recommend, because it needs to be imported – and that imposes an additional cost to an already expensive item (at around €310, the board alone will cost you approximately R4,800). If you’re able to stomach all of that, this is a great board, and it’s by far the best microATX offering there is, period.

As stated several times now, many of the features are designed for tuning (it offers through-holes for measuring voltages via a DMM, for instance), and it’s such a highly focused offering that it’s the equivalent of a track-machine made road-legal. You’re guaranteed to get plenty of car, but where it’ll truly come alive is on the track. In the same way, the Maximus XI Gene makes the strongest case for itself when you’re overclocking. 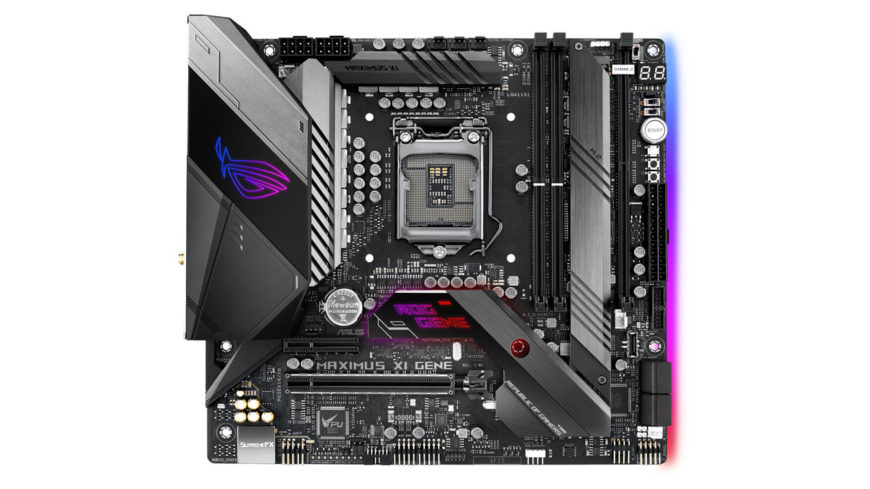 One final thing worth mentioning is that when it comes to presentation and attention to detail, no other vendor in the entire industry can match ROG’s products. The plastics, heatsinks, finishes and presentation are second to none. This comes across here in all aspects, including the DIMM.2 expansion card, which packs possibly the best M.2 heatsink on the market.

Overall, this is a great product from the ROG team. Outside of availability and pricing, it’s a stellar product – and should you be inclined to buy one, know that you’ll be getting the best microATX board ever produced.

N/AInsofar as microATX boards go, none can claim to match the Maximus XI Gene. Whether you’re set on a high-end, small-form-factor gaming machine, or an all-out assault on overclocking records, the Gene is more than capable at both, and especially the latter. 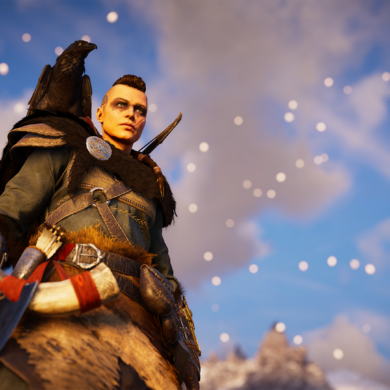