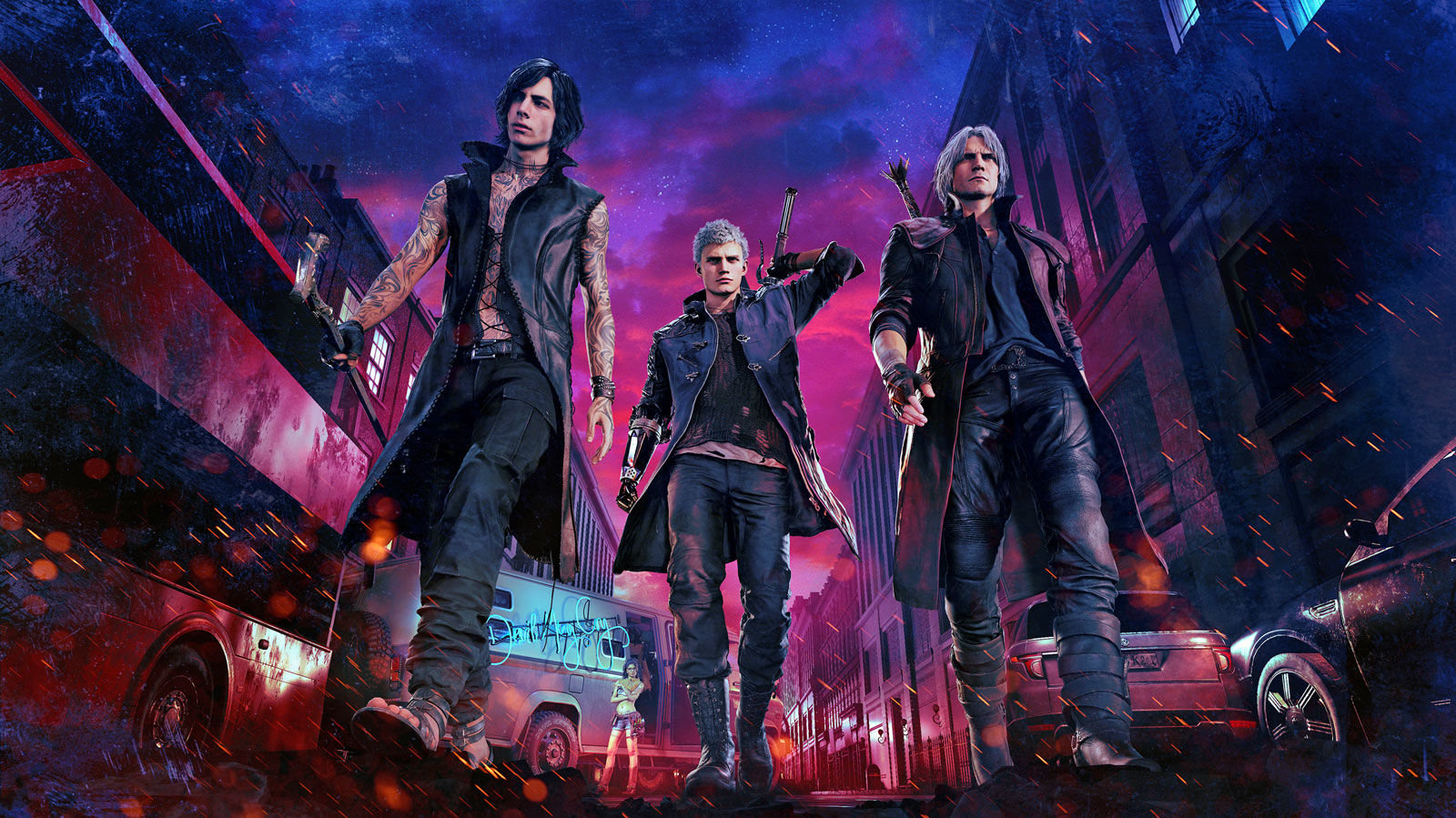 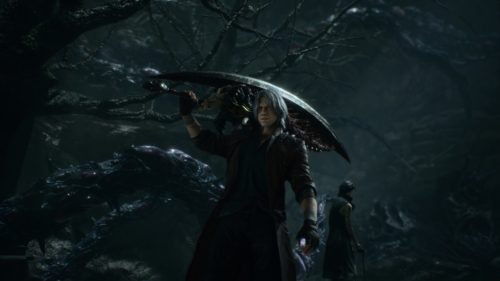 Release Date
8 March 2019
DEVELOPER
Capcom
PUBLISHER
Capcom
PLATFORMS
PC, PS4, Xbox One
REVIEWED ON
PS4
[First off, let me apologise for the lateness of this review. We’re all having load shedding right now, and in my area it usually happens for six to 10-hour stretches at night – which is when I play games, so it took me a long time to get through the game in the little bursts of power I had.]

So, Devil May Cry 5 picks up five years after the events of the previous game, which came out in 2008. Hard to believe it’s been 11 years since then. The story starts out in medias res, but you get more background info fairly early on. Nero has started his own demon hunting business with his girlfriend Kyrie and recruited a genius weaponsmith named Nico, whose “cool nerd with attitude” persona annoyed me initially – but I eventually warmed up to her. Nero and his crew are hired by a mysterious client named V to help him and Dante prevent the imminent arrival of a powerful demon overlord.

The first thing I noticed when I started playing is that Nero is missing his demonically-powered arm, the Devil Bringer. What? It was the thing I liked most about him in the previous game and now he doesn’t have it! Turns out his arm was stolen by another demon in the story and I must admit that in the flashback scene where you see it happen, I was almost taken aback at the lack of grandiosity – no anime-esque explosions of energy or anything like that, he just shows up, yanks it off and leaves. 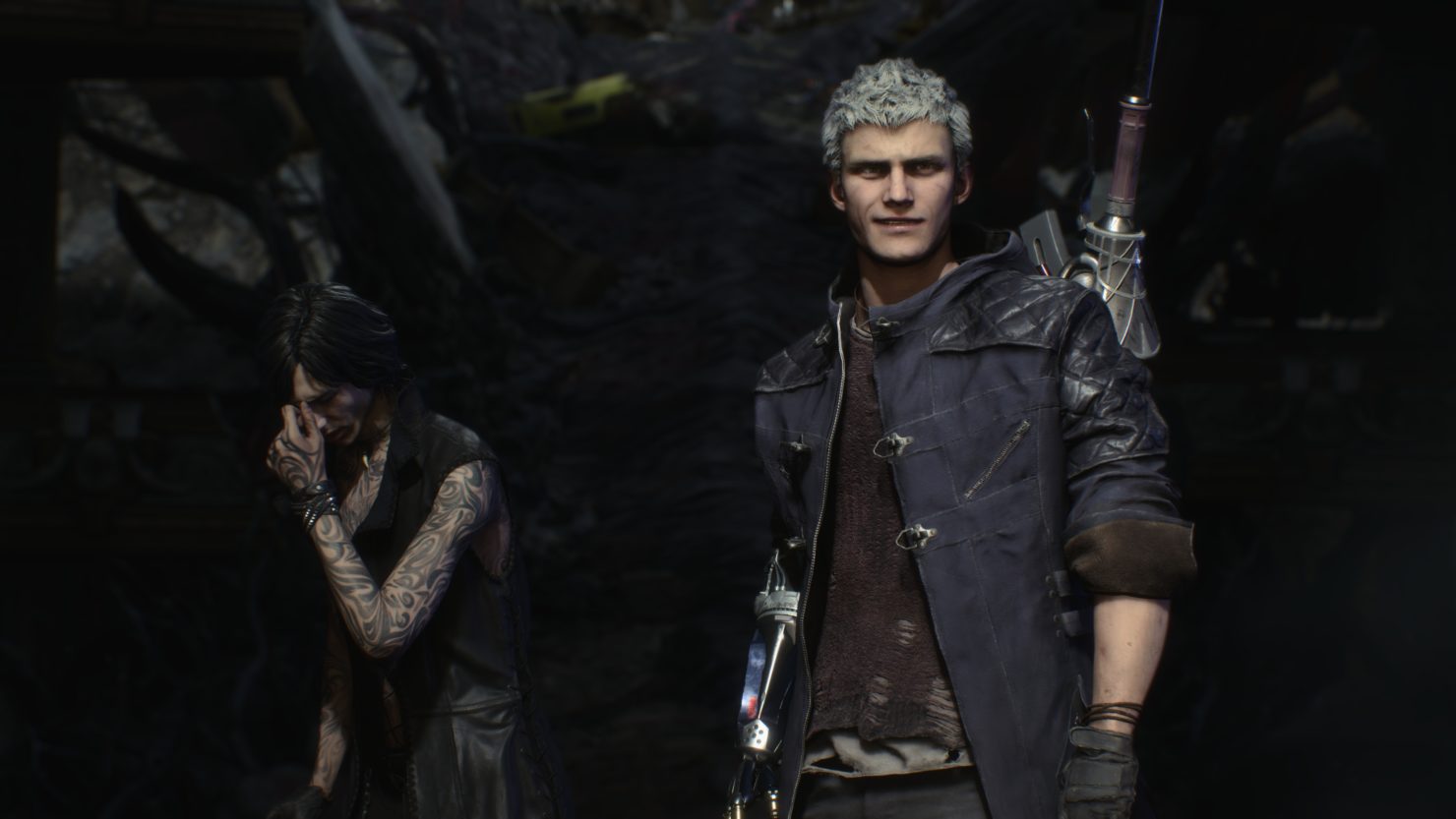 Which brings me on to one of the game’s main features – Nero’s new arm. To replace his missing demonic arm, Nico created an interchangeable prosthetic arm called the Devil Breaker, of which there are several different types offering abilities such as big area-of-effect attacks, special movement options, button-hammering continuous combos, and so on. It’s pretty cool, but there are some things I don’t like about it. The thing that irks me the most is that, although you can have several different Devil Breakers on you at any one time, you can’t bloody cycle through them – yes, you read that right, you can’t cycle through to a more appropriate Devil Breaker! Why the hell not?

These arms can also break, if Nero is hit by an enemy while in the middle of a Devil Breaker attack, or he can purposely break them himself – which is the only way to cycle through to the next one in line. There are Devil Breakers scattered all over the levels for you to find, but their placement is random and you might not get the ones you want. You can buy more from Nico using red orbs, the precious commodity you need to learn new attacks and skills, but some of the better Devil Breakers are quite expensive. You can always do a bit of extra grinding to afford them or hit the PSN store to spend real cash to buy lots of red orbs, which you can then use to buy the expensive Devil Breakers. Hmm. You’ll forgive me if I’m a little bit suspicious of this design choice, Capcom.

But my suspicions lessened when I played far enough into the game. The rest of Nero’s combat abilities, his Red Queen swords skills and his Blue Rose guns skills, are all earned in the classic DMC way, through hard work. Also, you get to play as two other characters, Dante and V, who have no bullshitty money-hungry mechanics. Dante is basically the same as he was in DMC4, having a plethora of weapons to acquire over the course of the game, including a frickin’ motorcycle he can split into two to smack enemies, and a hat which drains red orbs to attack but has the potential to earn them back tenfold if you use it right. He also has four fighting styles, each of which grant him even more moves with each of his many weapons – which kind of makes Nero’s Devil Breaker suck a little more by comparison. 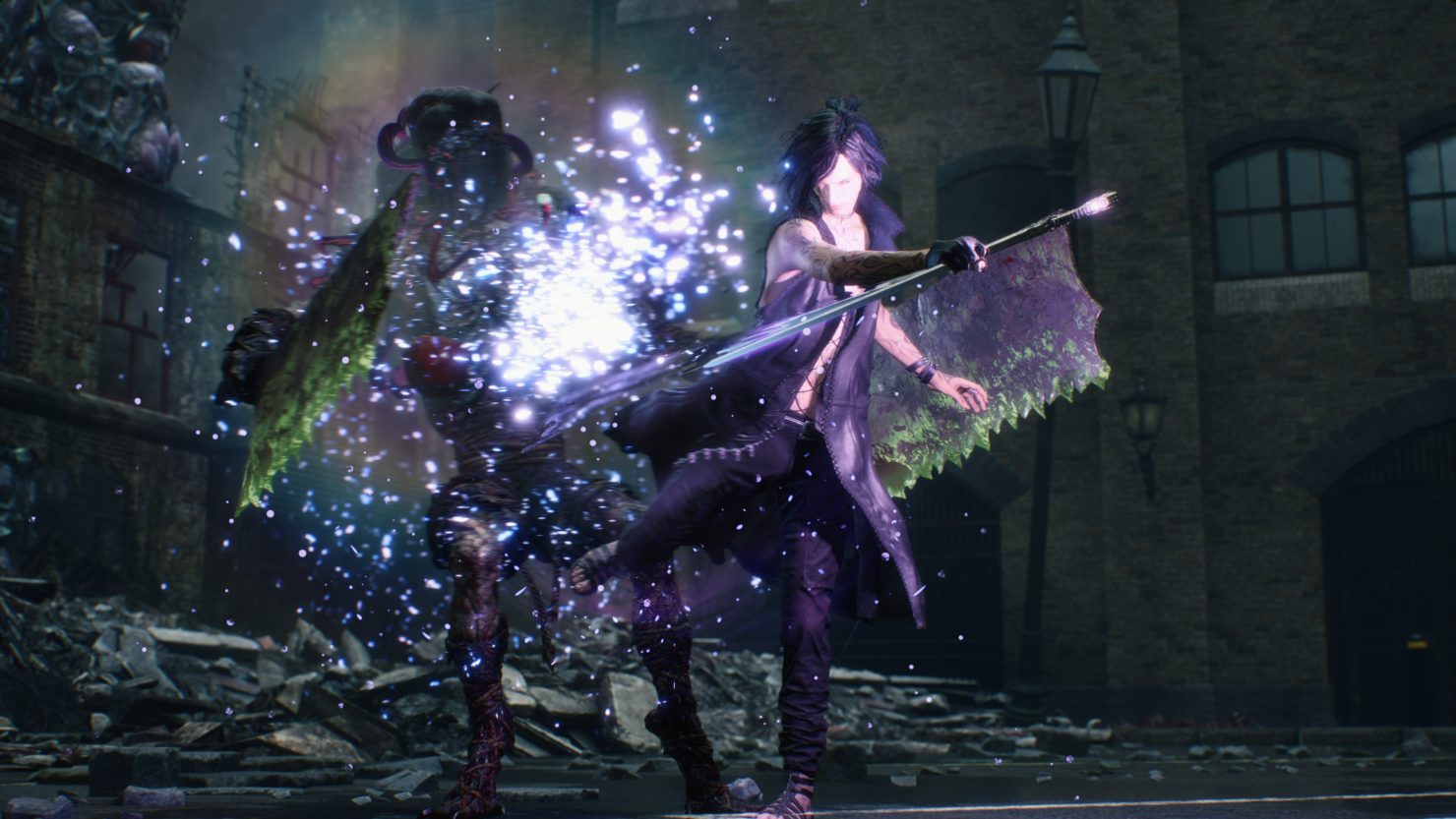 The new guy, V, who reminds me of the tall goth kid from South Park, is a frail dude with a cane and tattoos on his arms who can summon three different demons to fight for him – one of which is a shadow cat creature from DMC1, those annoying bastards that could morph into different shapes. Yeah, now you can command them to do all those cool attacks against your enemies. Sweet! V’s gameplay revolves mostly around keeping V out of combat and sending his three demons in. The only catch is that his demons can’t kill enemies so instead, when they’re weakened enough, V must finish them off himself with his cane. This not only adds an interesting dynamic to his gameplay, but also looks cool because he has dozens of different finisher animations.

Each of these three characters has multiple skill trees full of unlockable moves which will surely take you ages to acquire in full. There’s a great variety of enemies which all require different strategies to beat, and some of the bosses are just insane. Also, the hilariously over-the-top cutscenes full of badassery are as amusing as ever.

Simply beating DMC5 isn’t all that difficult, but that’s not the point of the game. Getting those S++ ranks in every stage and feeling like a stylish combat god is what it’s all about, but it’s easier said than done. Still, there’s so much depth and variety in the combat system so that almost anyone can find their own way to do it with enough practice.

Devil May Cry 5
BOTTOM LINE
Devil May Cry 5 proves that it's still the king of spectacular, over-the-top action games by providing us more depth and variety than ever before alongside great visuals and ridiculously entertaining story
PROS
Great visuals with awesome animations and creative enemy designs, especially some of the bosses
The sheer amount of depth to the combat is amazing and definitely unmatched by any other action game I know of
The game is pretty large even for a single play-through, and that's before you start repeating stages to master them and conquer them with S rankings all the way
Dante has some of his coolest and most ridiculous weapons ever, and the new guy V is pretty cool once you get used to him
CONS
My biggest gripe is that you can't cycle through Nero's Devil Breaker arms at will, they break easily and they cost resources - these are not the makings of a fun mechanic, Capcom, especially when you add in the suspicious microtransaction bit
Lady and Trish are only in the story scenes - but we don't get to play as them.
I'm not the hugest fan of the soundtrack they went for here, but you might like it
Oh, and my preoder bonus of "live action cut scenes" was a load of crap - just badly acted pre-vis footage with awful props that took up 6 GB, which you can't uninstall on its own, so your only option is to delete the whole game and download it again minus this "bonus" to get your wasted 6 GB back
80 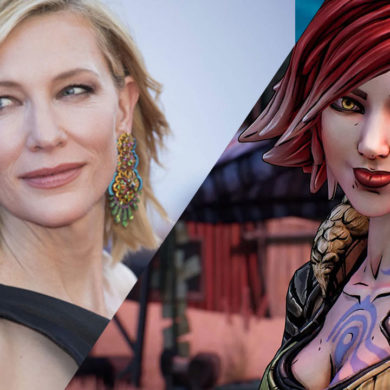