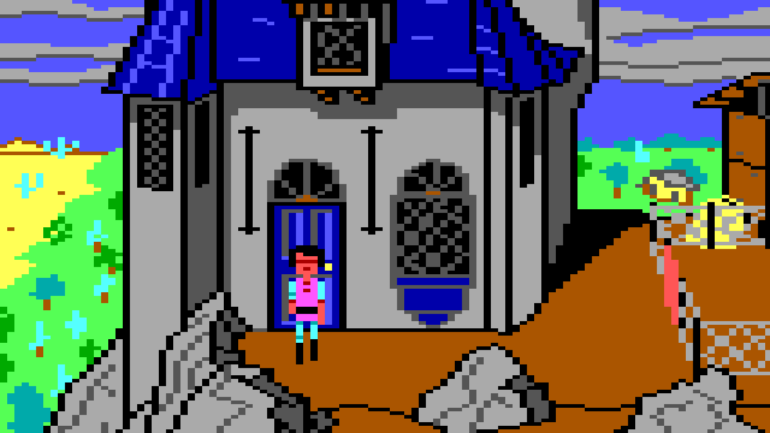 For as long as he can remember, which isn’t all that long really because he’s still a teen but anyway, Gwydion has been held captive in the house of Manannan, an evil wizard and ten-year subscriber to Cat Fancy magazine. It’s a hard life for Gwydion, who must feed chickens and sweep the kitchen floor and empty chamber pots at his master’s demand, over and over, until he works out some way to free himself. Seriously, over and over.

After what was basically a scavenger hunt with simple puzzles and a somewhat muddled sequel, King’s Quest III: To Heir is Human took the series into a more sophisticated, narrative-oriented direction (much like the first Space Quest game, also released around the same time) and was significantly more difficult to solve than the others.

Like its predecessors, the third game used a pretty basic verb-plus-object text parser for interaction, although it was the first – ever, apparently! – to use an auto-mapping and teleporting feature – something Sierra used as a major marketing hook, only to discover fans despised it because they felt it made the game too easy.

More than 30 years later, though, King’s Quest III remains not only my favourite in the series, but also a game I’ll still excavate from the cupboard and replay from time to time. Admittedly, I’m a big slut for old school EGA graphics but there’s something kind of enduring about such visual simplicity, that’s also saved it from the same retrospective OH-MY-EYES phantasm of early 3D games.

The game’s launch was initially met with some hostility from fans, who claimed it wasn’t a proper King’s Quest game because King Graham wasn’t in it. In the land before internet-time, games like this could take several weeks or even months to complete, and it wasn’t therefore until later than fans realised the connection the Gwydion and Graham. Epic fail, noobs.

We’ve teamed up with GOG to give one NAG reader a free copy of King’s Quest 1+2+3. Simply drop a comment below and we’ll choose a random winner on Friday.