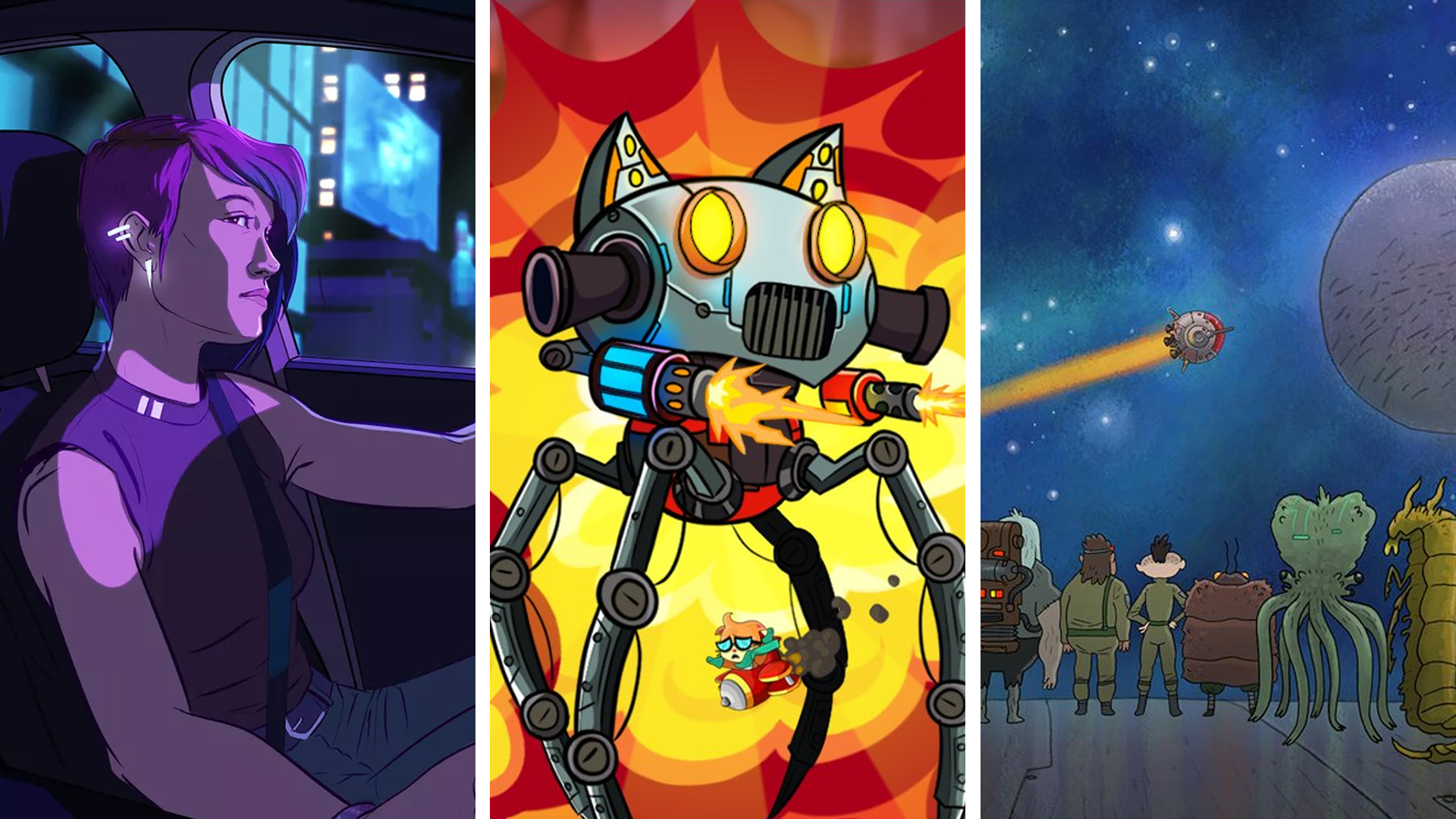 Five (more, plus) games you mustn’t miss on Apple Arcade

The Apple Arcade subscription service released a few months ago with tons of games, and in November we looked at a few of the games that were worth playing and then again in January – but are there any more that are worth your time? Let’s find out.

It’s worth keeping the same disclaimer in mind once again – in the interests of fairness to the mobile market, I’ve played each of these games using the touchpad without an external controller. Many Apple Arcade games include controller support, but if you’re like me you probably don’t carry a controller everywhere you go. 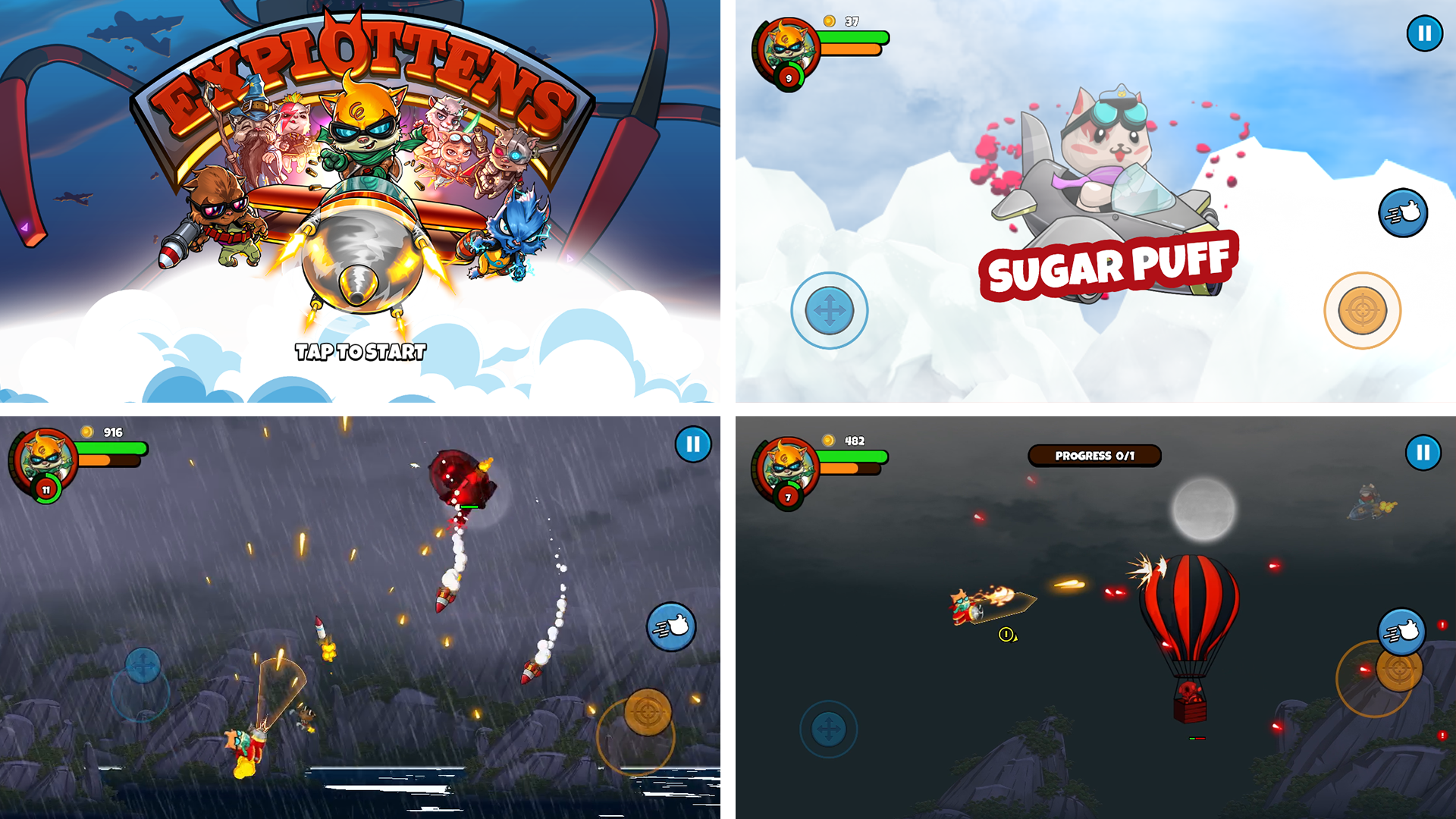 Do you want to be a little anthropomorphised kitty cat who flies around in a tiny plane and fights an evil organisation called K.L.A.W.? Well then Explottens may be the thing for you! The game picks up with what appears to be a cat society achieving world peace, so that’s nice, but then the evil kitties attack and it’s up to you to put a stop to them – which generally involves shooting at them until they go boom.

The game is a twin-stick shooter in which you control your little kitty plane, manoeuvring around the screen with one stick while the other stick unleashes a barrage of bullets and missiles. It’s somewhat reminiscent of old-school plane combat games like 1942, but it’s not from a top-down and a bit more forgiving. You buy upgrades, new weapons and companions (which are basically auto-firing turrets that follow you around) in a store, and then use them to unleash explosive hell upon your enemies.

It can be a little clunky at times to move quickly around the screen and aim, and the boost can be very annoying because of its HUD placement just above the aiming stick and so you sometimes don’t actually push it when you think you’ve pushed it and then you die. But regardless of all that it’s cute, involves lots of destruction, has short levels and so it’s perfect for mobile play, occasionally features challenging bosses, and has multiple difficulty settings for those who want a much tougher time than I had (you also get more in-game money for playing on higher difficulty settings, so that’s nice). 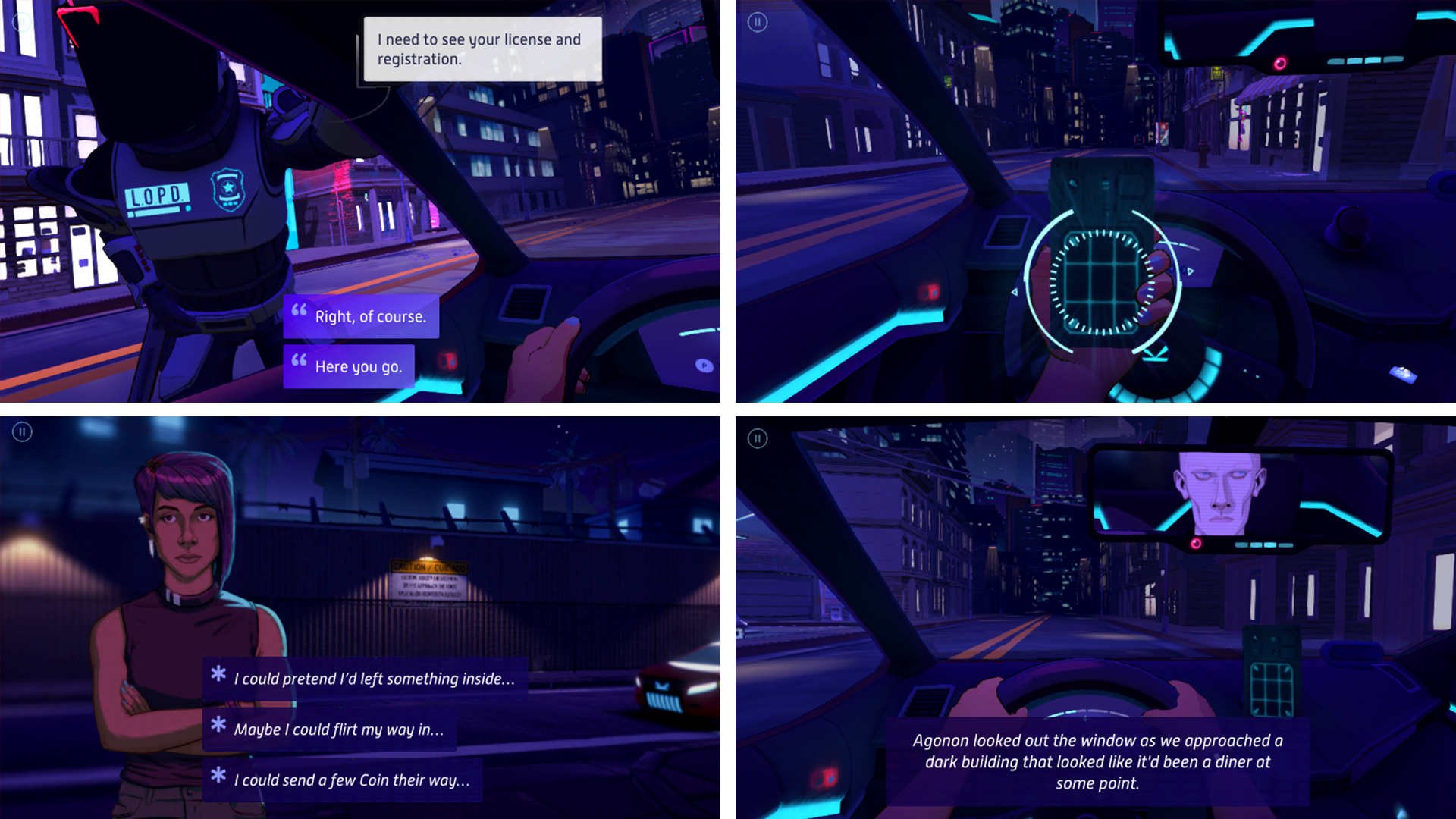 If you want a game that’s all dialogue and choice then this one’s for you. NeoCab puts you in the shoes, and behind the wheel, of a futuristic Uber driver in a cyberpunk city filled with corporate greed and takeover, posthuman cybernetic augmentations, and a whole bunch of world-building through conversations with the people in your cab.

The game is set in a world in which cabs with human drivers are slowly becoming redundant as everyone pursues the far safer option of driverless cabs owned by the corporation Capra. This corporation is pretty much the embodiment of automation. They have hotels with capsules that make you sleep instantly and are replacing real hotels, and there’s driverless cabs that are completely safe (but still accrue some casualties along the way and it’s all covered up). So, you know, standard cyberpunk dystopia stuff.

But that’s the world itself. The gameplay revolves around your futuristic Uber app as you choose your customers, manage your star rating (because you need to make sure your passengers aren’t unhappy with the service), keep your car fully charged (it’s the future so bye bye fossil fuels, hello equally expensive charging stations), and chat away with passengers while trying to solve a mystery about a friend who’s gone missing.

The dialogue system is where the real meat of the gameplay lies. On top of all that star and energy management, you need to try and keep your emotions in check. You chat away to passengers and get branching storylines for each, but your responses are determined by your emotional state. So if you’re angry you can’t say something calm, if you’re calm you can’t say something too angry. And different people want to be spoken to differently. You want to be jokey with some people, you want to act like a robot for others, and others might want you to talk about how life is just pain (that’s an actual passenger and he’s in a cult that worship’s a giant worm because… why not?).

So in the game you’ll be having loads of conversations and that’s about it. It’s not an “exciting” experience but rather a slow burn with a lot of things to say. It’s intelligent and has some great characters, and seeing as it’s all characters it’d better have some good ones! But if you’re looking for a challenge, or the myth of an apolitical game, this won’t be for you. 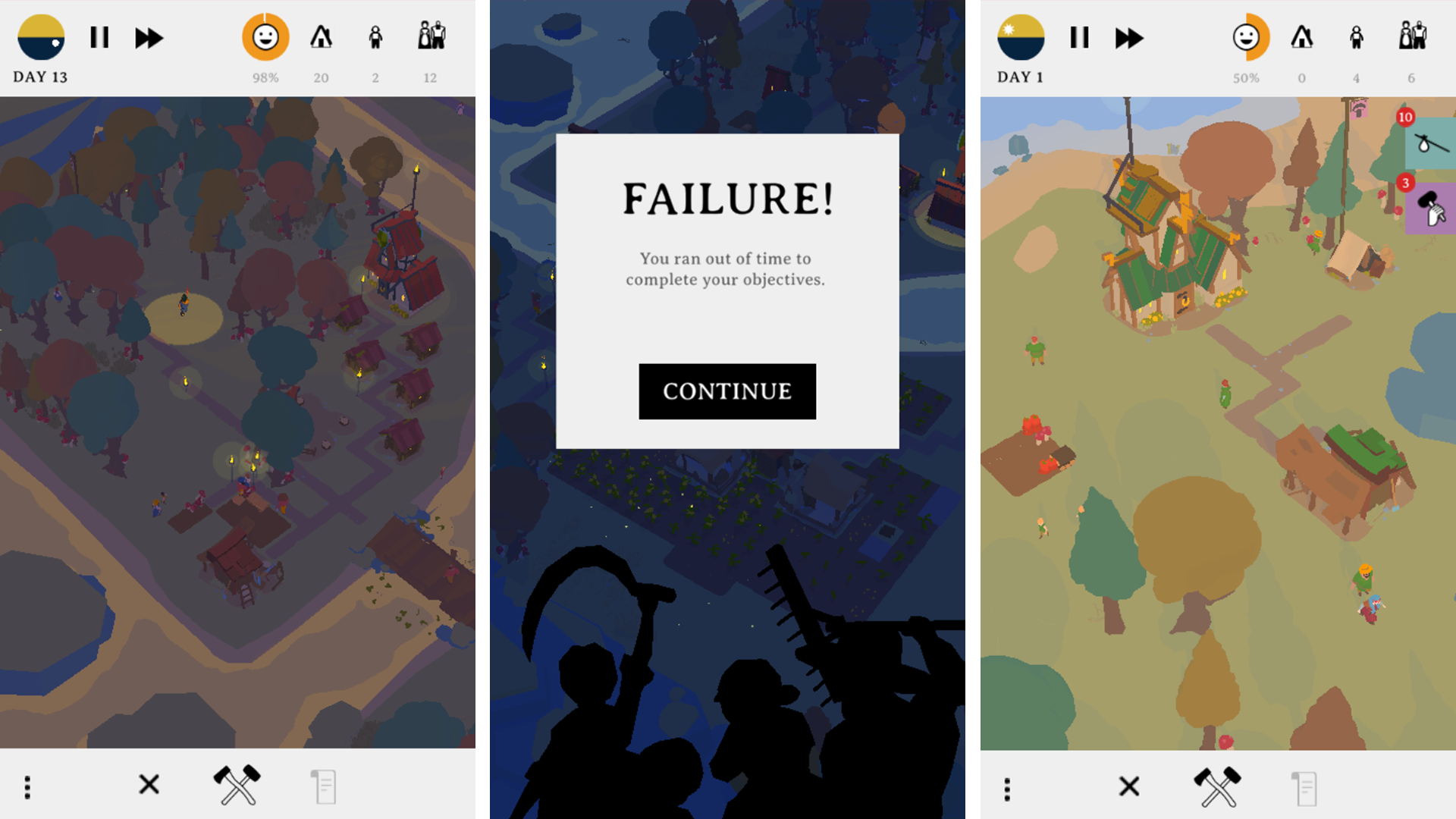 If you’re a fan of city-building games but don’t want all the confusing stuff that often comes along with it then give Outlanders a try. The game puts you into the shoes of the usual city-building omnipotent god who throws down buildings from his magical bird’s eye perspective and then watch as the little human ants below toil away to construct the buildings you deem necessary and then harvest the resources necessary to keep everyone alive and working.

In this sense, the game is a very simple city builder. You build houses to make sure your people have a place to sleep, you forage from the forest or farm to ensure they’re well fed, you provide them with work in several industries, such as woodcutting, foraging, farming, building, et cetera, and you watch your little village grow as kids grow into adults, get jobs, and eventually, as many “years” go by, eventually die.

The difference here is that you aren’t given a big ole map and told to go nuts! Instead, you’re presented with a series of levels. Each level gives you a certain leader and you are then told to complete instructions within a time limit. So it could be that you have forty days to collect forty planks of wood and to make sure everyone has a home. If it reaches forty days and you don’t have that – well, then you fail and have to start all over (which can be kinda frustrating because you don’t expect the game to ramp up in difficulty at all and then you’re suddenly scrambling to harvest enough tomatoes but they keep eating the damn things! Yes, I’m fine!).

A few small hints for the game, because it doesn’t tell you these things – keep an eye on your food reserves because it isn’t displayed on a screen and so it’s easy to run out and then realise too late that the place you were foraging has been picked clean and now you have to scramble to build a new lumberjack place and then everyone dies of starvation after like three days, leaving one child wandering around aimlessly! Anyway… just don’t underestimate the game because it can be weirdly harder than its cute art style would suggest.

This game is a great way to have some strategic city-building fun but it feels like something a bit more involved for your usual mobile game and so isn’t best for standing in mall queues but rather while sitting on public transport or waiting in a bank queue. It’s more involved than most, but it’s a fun little thing and good for several hours of enjoyment. Just be ready for accidental failure because your roads weren’t as efficient as they could have been and now your stockpiles are running short and your food is nearly gone. Quick, build a new foraging place! 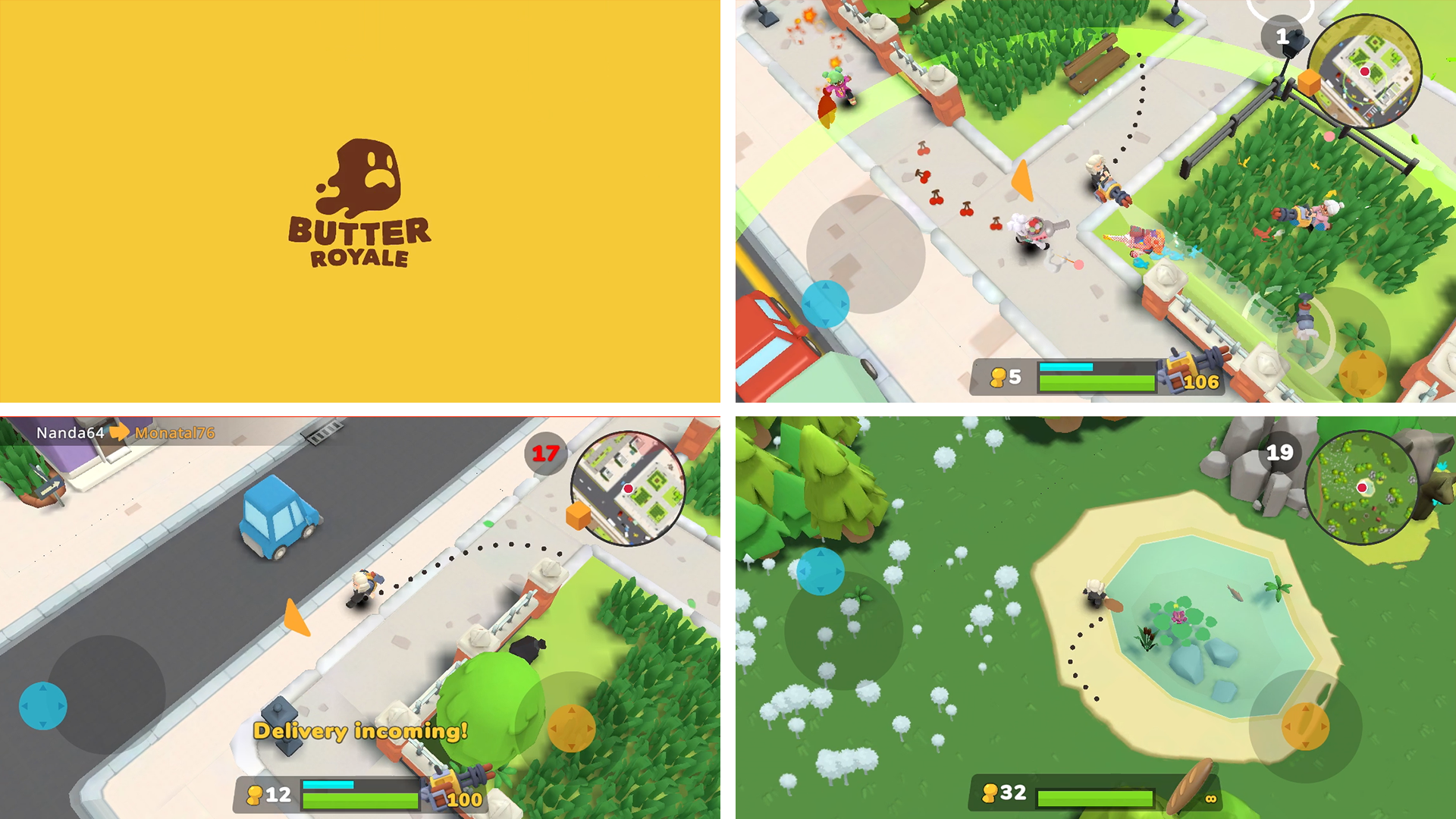 Do you want a battle royale game that isn’t Fortnite or PUGB? Well look no further than Butter Royale! This game discards that third-person perspective and instead throws you into a more isometric view as you do the usual battle royale things and the map slowly shrinks because of a gigantic wall of… butter? It’s a bit strange but I suppose it’s as good as any other contrivance for why the map continuously shrinks around you.

The game itself is colourful and cutesy and, in usual battle royale style, you choose where you start off on the map (but there’s no gliding in from the sky), you collect weapons, find drops and armour pickups, prepare yourself for battle, and then fight it out on an ever-shrinking map. So it’s pretty much your standard battle royale fare aside from the inexplicable butter wall.

Butter Royale doesn’t evolve the formula in any real way, shape, or form, but it presents the player with a good little map that encourages getting up close and personal with your enemies seeing as you can only see what’s on your limited screen space, and you can also hide away inside bushes and tents so you can jump out and shoot everyone.

There’s no headshots or quick building antics; you just run up to your foes, circle strafe your way around them, and try to shoot more bullets at them than they shoot at you. It’s rather simple and traditional, but good for a couple matches. There’s also an offline mode that lets you play against bots, and that’s great if you don’t want to get into those confrontations with real people who probably play the game far more than you ever will and so they’re way better at it. Or just go in for the challenge and fight some humans. In addition, I thankfully never had server issues and all the matches filled up quickly, but that could always change as the game gets older. So grab it while it’s hot! 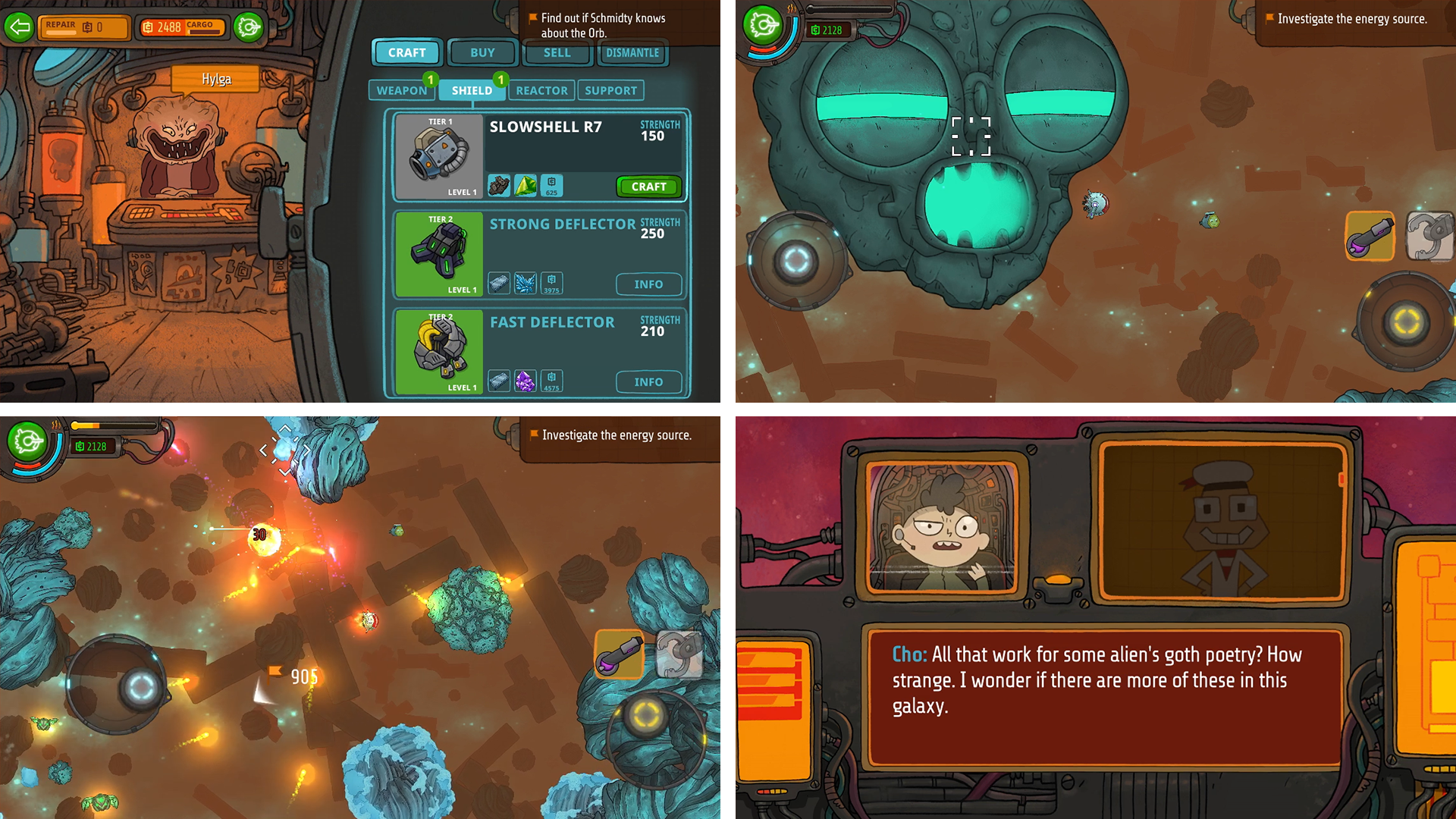 If you want a comedy game about flying around space, shooting little alien ships, and dodging a whole load of bullets, then No Way Home may be for you. You take control of a space pilot named Cho, and she’s supposed to be flying a tourist cruiseliner through space – but then something happens, everyone gets frozen, and she eventually gets dislodged from the ship, and has to fly around trying to find her way home while navigating an alien galaxy.

The setting smells a lot like a less adult-oriented Rick and Morty, with an art style that also feels like it takes inspiration from the show, but Cho is a much more likable kind of person and she just wants to find her way back to Earth. And so she starts taking on some jobs, getting some upgrades for her ship, and starts… murdering aliens.

Anyway, the game is, at its core, a bullet-hell twin-stick shooter in which you fly around a screen, dodging projectiles from other ships, and destroying everything in your path. All the while, you have a sidekick robot thing that helps you shoot some people and makes constant, rather annoying, quips that revolve around holidays (get it, he’s like the AI on a cruiseliner so everything he says is like referencing that – I know right, brilliant).

But general annoyance of the AI companion aside, the game is a ton of fun that really isn’t too difficult. Even death carries a very small penalty by only taking some of your currency. That’s it, the enemies don’t even respawn. So you won’t exactly be playing this game with any kind of real challenge in mind, but regardless of all that it’s cute, fun, in-depth enough with its upgrade system to last a few hours, and it has a mindless little narrative to play through.  Give it a go. 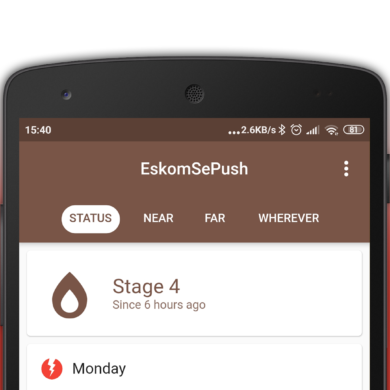 Get ready for loadshedding with EskomSePush