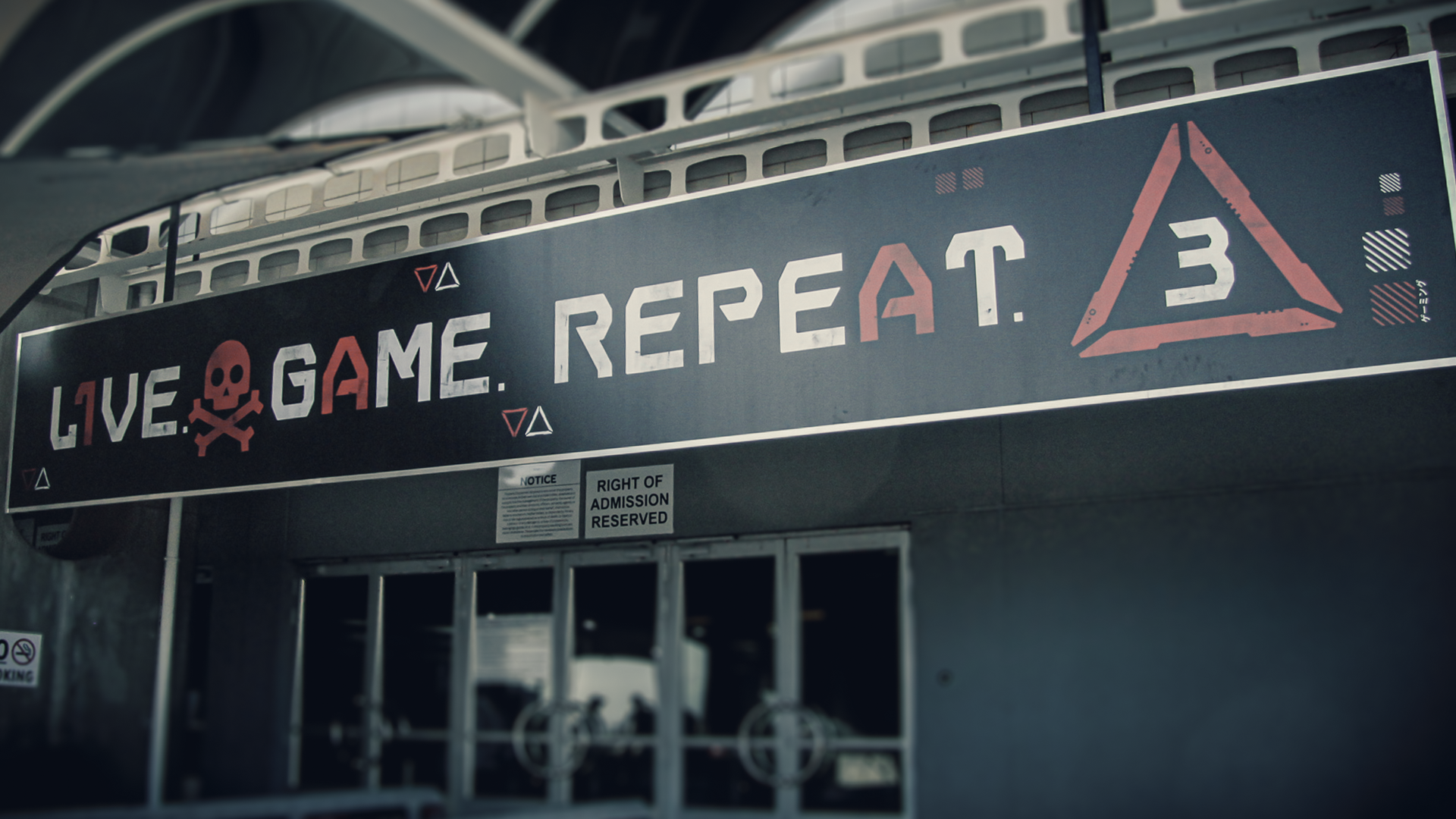 rAge 2020: A retrospective of the rAge expos that preceded this one

The rAge expos we can actually remember, I mean, because things get kind of fuzzy from one year to the next, and besides, most of us want to forget the time Michael wiped out on a Segway like a noob, lol. Or maybe he told us to forget that. I dunno, I forget!

This year, rAge turns 18. New bonuses “Vote”, “Buy Booze With A Real ID”, and “Move Into A Dingy Flat In Melville With Eleven Other People And One Fork That Everybody Has To Take Turns With” unlocked, new cosmetic item “Mandatory Mask” unlocked, new event “rAge Digital” unlocked. Happy birthday, kid, now get out and go find a job.

And in the meantime, who remembers this one?

“I can’t even remember what we did last year.” – Michael James

The first ever rAge, and the same year that Manhunt launched and prompted one of the game industry’s first ever moral panic controversies. Coincidence? Yes, but I think it’s important to recognise that games (and graphics) have evolved a lot since then, and so has rAge. It’s, like, a metaphor. Also, the Nokia N-Gage was one of NAG’s cover features that month which isn’t super relevant to rAge, I know, but it’s kind of hilarious. Tech has evolved a lot since then too – dialup internet? Deader than a 3MB download at 99 percent complete and your mom decides to use the phone. Sony’s PSP? Discontinued. Flip phones? Bad example, but MySpace is offline so it cancels out.

The debut expo blagged a Best New Exhibition award, 100 XP, and a sequel.

This is one of the rAge expos we don’t remember much about, so that’s awkward. “We” but not me because I wasn’t even at rAge 2004, though, so I have an excuse. The others, not so much, but I’m going to blame Len, because everything is Len’s fault, those are the rules. This is Len at rAge 2004, no context necessary. 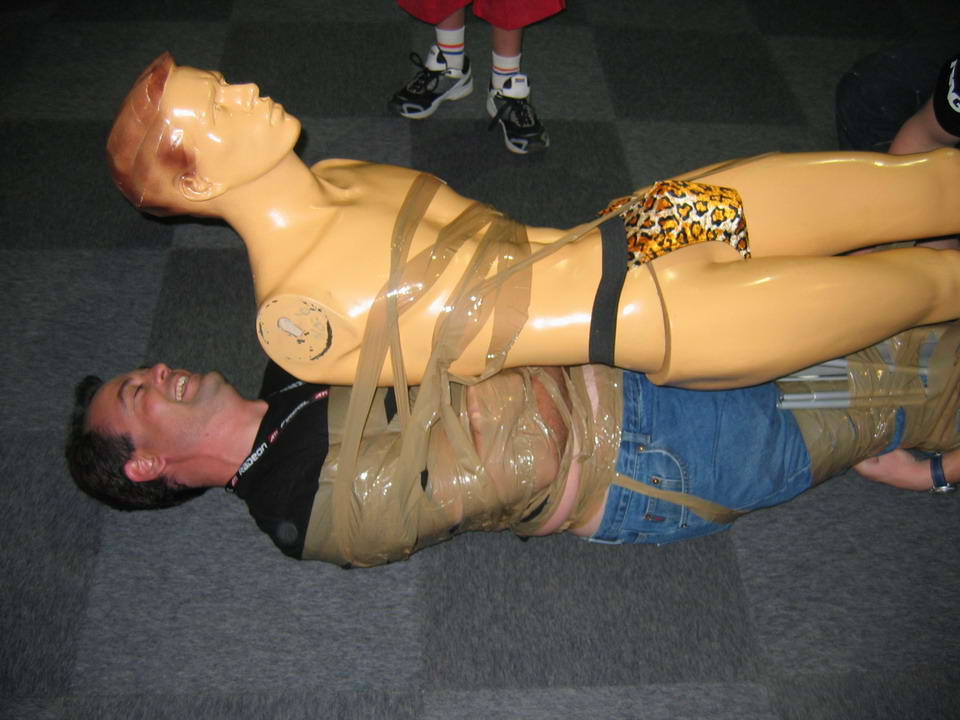 “Fatal1ty coming to play Quake at rAge was always a highlight for me – it was the first time someone like that came to the event and esports wasn’t even a thing yet.” – Michael James

Jonathan “Fatal1ty” Wendel, the world’s number one Quake 3 player at the time, was a featured “cyber-athlete” celebrity guest at the expo, and it was kind of a big deal. Visitors could take him on in Painkiller, 1v1, for a R20,000 cash prize.

“Cyber-athlete”, though. Which corporate marketing department voted for that? I get that pro gaming was a new concept in 2005, but jeez.

“I was trying to show off but I didn’t know the battery was almost flat. The wheels just stopped turning, and I did a tuck and roll forward somersault in front of most of the rAge staff. Lucky the expo was closed. They all cringed for me.” – Michael James

Fatal1ty was back in 2006, this time with Rafik “LoSt-CaUsE” Bryant, Alana “Ms.X” Reid, Therese “Trito” Andersson, and Gareth “GaRpY” Marshall to compete with local gamers in Arena 77’s Quake 4 competition (Rafik Bryant wins!), and Microsoft hosted the South African Xbox 360 launch with an exclusive, invite-only party at the Dome on the Thursday night.

But the real star of the show was Michael. 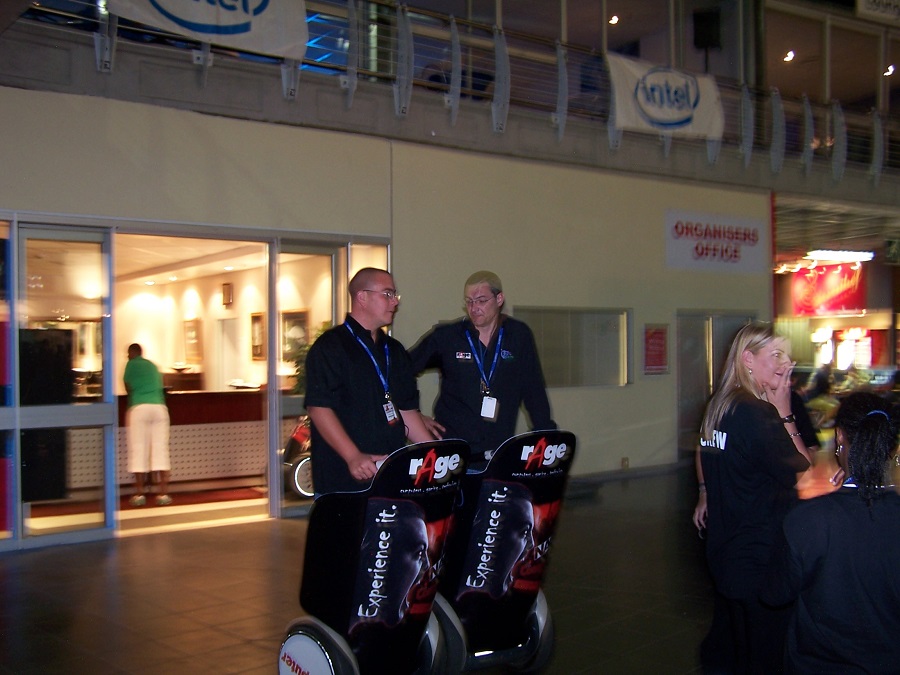 My first ever rAge. I got to the Dome at about 06:00 on the Friday morning, and it (obviously) wasn’t even open so I decided to hang out in the toilets at Northgate Mall for three hours instead because that’s a totally normal thing that totally normal people do, okay, and I’m totally normal like that.

According to Lauren, NAG’s designated “responsible adult”, events at rAge 2007 included the first ever provincial gaming colours awards hosted by AGASA, the first ever (triple c-c-c-combo!) Xbox 360 LAN, and the Nintendo Wii launch. I don’t remember because I played Guitar Hero II the entire weekend.

I’d also been playing Guitar Hero II the entire year up to rAge, and I was THE BOSS until Sunday when some random teen completely obliterated me in a 1v1. Like a Scooby-Doo villain, my disguise was busted, and – zoinks! – it was me, the creep from the toilets at Northgate Mall.

“When we used to do the magazine, each year someone would always come up to me and ask for an autograph at rAge. I never ever got used to that. It was a very humbling thing for me – I still don’t know what to make of it. I mean we were just screwing around, playing games, and hating our lives during the deadline weeks.” – Michael James

This was ex-NAG magazine and website editor and one-time head-in-a-jar Dane’s first ever rAge. Lauren remembers “a funny story” about it, but doesn’t remember what it was except that Dane was “wide-eyed and a bit overwhelmed going onto the stage to accept his grand prize”. Because ur boi Dane won a laptop in an esports competition (“which is VERY ironic because Dane hates esports”). 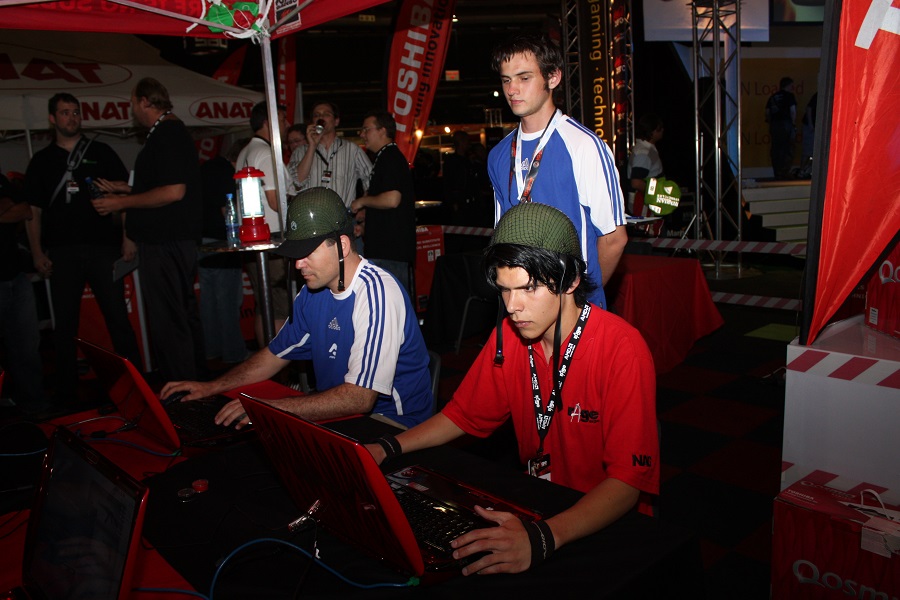 We miss you, Dane. #5000candlesinthewind

[EDIT!] Esports scene queen and Dane’s girlfriend (what’s that even like?) Sam “TechGirlZA” Wright dropping the #DaneGate info-bombs on Twitter.

On the stage with him holding his fancy new laptop the brand person asks him “what are you going to do the moment you get home”.
Correct answer: Jam on my fancy new laptop.
Dane answer: probably go to sleep hey. /2

😂😂😂 he’s all “I hate esports”. Dates esports shoutcaster. Attends more esports events then most. Knows more esports players personally than most. Watches me on esports broadcasts when I’m working and now – competed on the bloody rAge stage in an esports tournie. pic.twitter.com/jEeS9ZoTTY

And I was at rAge 2008, because Ultimate Quest was at rAge 2008. The others don’t remember this, but I do, because it was an Xbox 360 game I developed with my nerd-bro Claudio “Ch1ppit” De Sa for the Microsoft DreamBuildPlay competition. It didn’t win because it wasn’t even finished and also because I got lazy with the animation cycles, so that’s why the floating sheep were floating sheep. Game development is hard.

And every year, that moment – tick, tick, tick – just before security opens the doors on Friday morning, and this is it, we can’t cancel now.

And the queues and the free swag hype and the 10-year old who gets separated from mom and ends up in the organisers’ office at the back, bawling over a Fizzer. The “Saturday Squeeze” and the 30 minutes of secret sleep in one of those empty rooms next to the press lounge. The impulse purchases. The inevitable plumbing incident. The caffeine delirium that’s become kind of difficult to ignore by 12 on Sunday, so the jokes are starting to get… weird.

And then, almost abruptly, it’s over. It’s over. IT’S OVER.

Same time next year? Let’s do it.

That’s what Gareth and I were told when we asked what exactly we were supposed to be doing at the expo. And if Lauren tells you to do something, you do it, because Lauren has the beer coupons and October in Joburg is hot as fuuuuuck. So, we had fun. And because 2019 was the middle of the Cape Town Water Apocalypse for us, we had proper showers too. 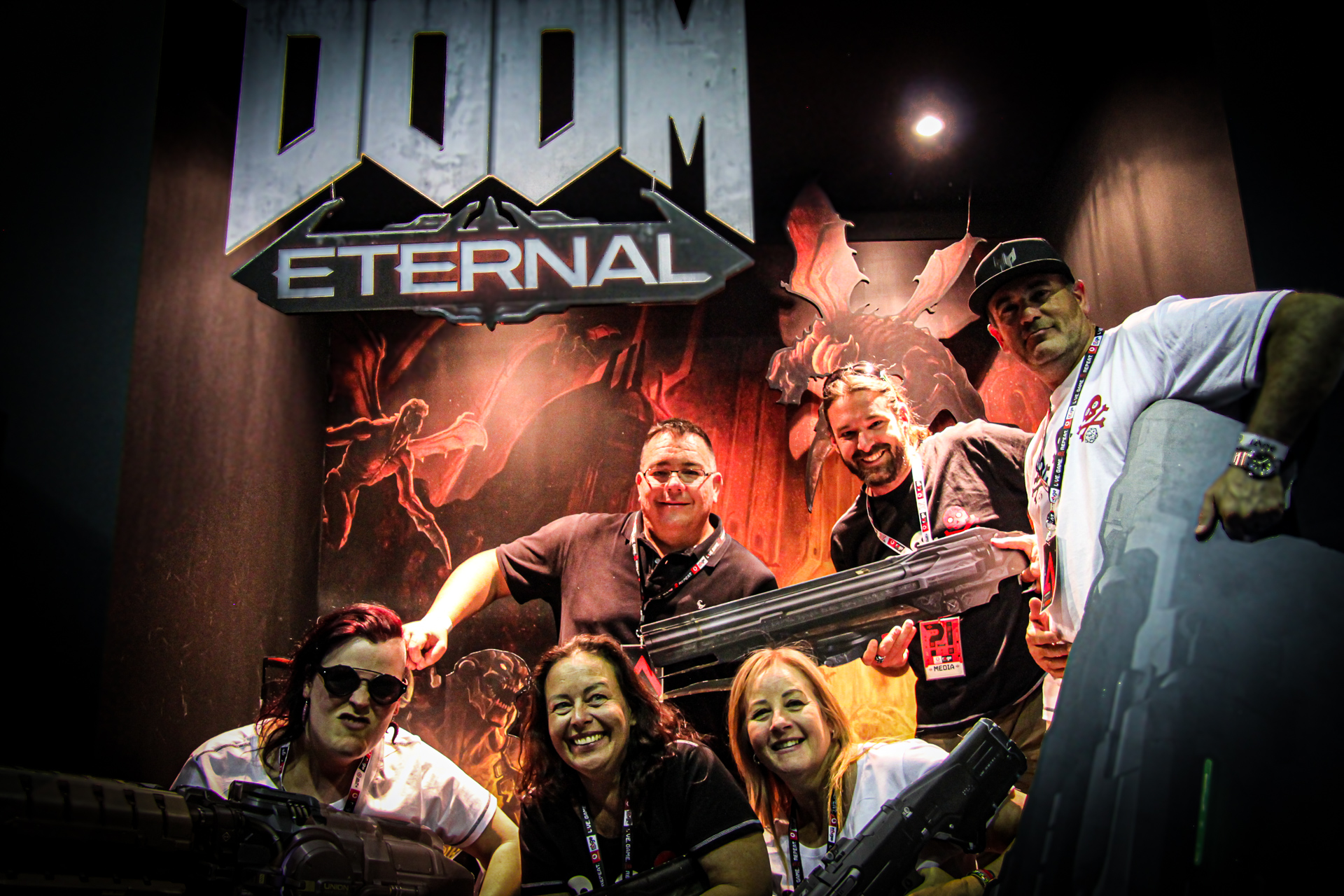 No PPE. No social distancing. No worrying about those cardboard props that were probably clotted with bacteria by the time this photo was taken on Sunday.

I remember. It helps to remember.

Omg, we didn’t even worry about those cardboard props and that’s SO GROSS. It’s not like germs didn’t exist before 2020. 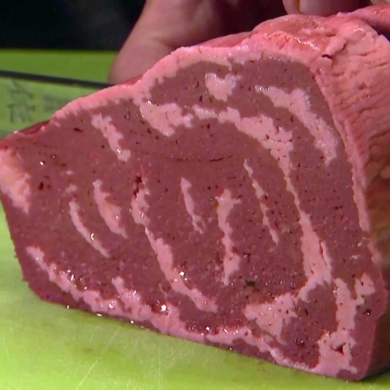