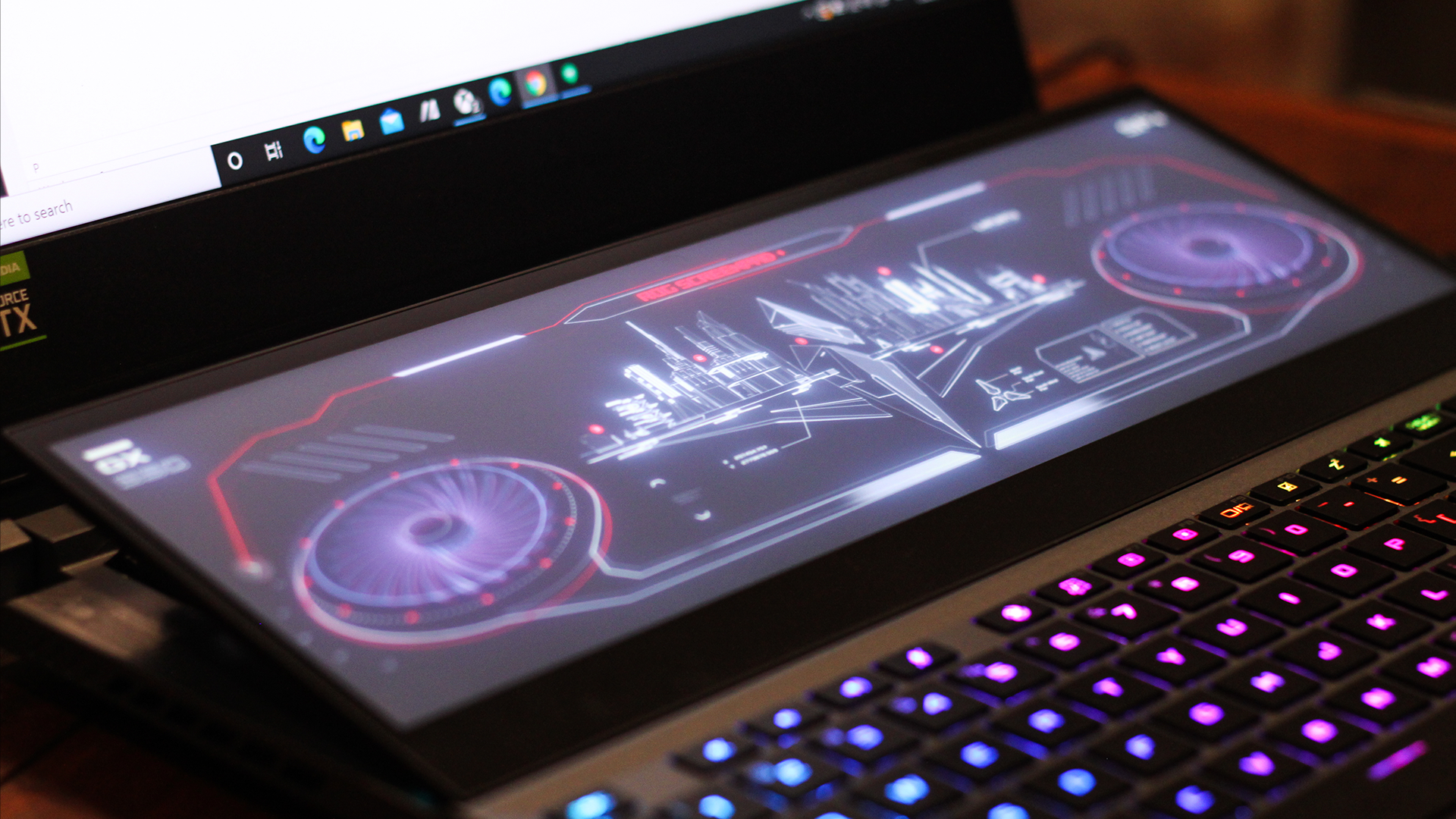 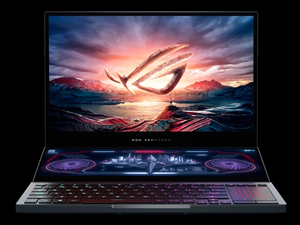 It is 2020. A global pandemic has wiped out most of humanity’s weekend plans, and not even working from home in our pyjamas can make up for missing out on whatever the opposite of constant existential panic is. Instead of flying cars, we got a toilet paper apocalypse, multiple Cyberpunk 2077 delays, and stupid conspiracy theories about 5G “smart dust”. This isn’t the future we were promised in the brochures.

But the Asus Zephyrus Duo 15 is an okay substitute.

First, though, some necessary management of expectations. The cheapest local price I could find for this thing is R89,999, and that’s not a typo or even the most expensive option. Like visiting a private Caribbean island that employs temporary workers and coincidentally also hosts ultra-exclusive, invite-only “exotic game hunts” for discerning (and discreet) clients, or buying avocados out of season, the Asus ROG Zephyrus Duo 15 is not for us. Unless you’re rich, and it’s just me who can’t squeeze that kind of financial extravagance into my fun-budget. Or one of my other budgets. And if I ever had that kind of cash, you know I’m choosing the holiday with extras because so would everybody else, and this isn’t evidence for the prosecution, it’s a totally hypothetical discussion, and I dunno about you but I was talking about avocados.

Asus is no noob in the lol-so-ludicrous-level gaming laptop space. Back in June, I reviewed the ROG Strix Scar III and ROG Zephyrus G14, and the marketing department’s inconsistent naming conventions notwithstanding, the Zephyrus Duo 15 is the company’s new contender is more like the next, now-with-more-features iteration of the Strix Scar series than the Zephyrus series. In fact, its specs are almost identical to the Strix Scar III, but with some innovations – the Intel CPU is an upgrade, but it’s the same Nvidia RTX 2080 GPU, same RAM, same SSD, and even the same connectivity ports. One difference, however, is immediately obvious on the unboxing.

IT’S GOT TWO SCREENS, BUILT-IN, LIKE ONE OF THOSE SCI-FI SHOWS ON THE TV, AND PRODUCTIVITY IS CANCELLED FOREVER BECAUSE NETFLIX AND ADHD AND WHAT ELSE CAN I GET ON THIS SO I HAVE EXCUSES. 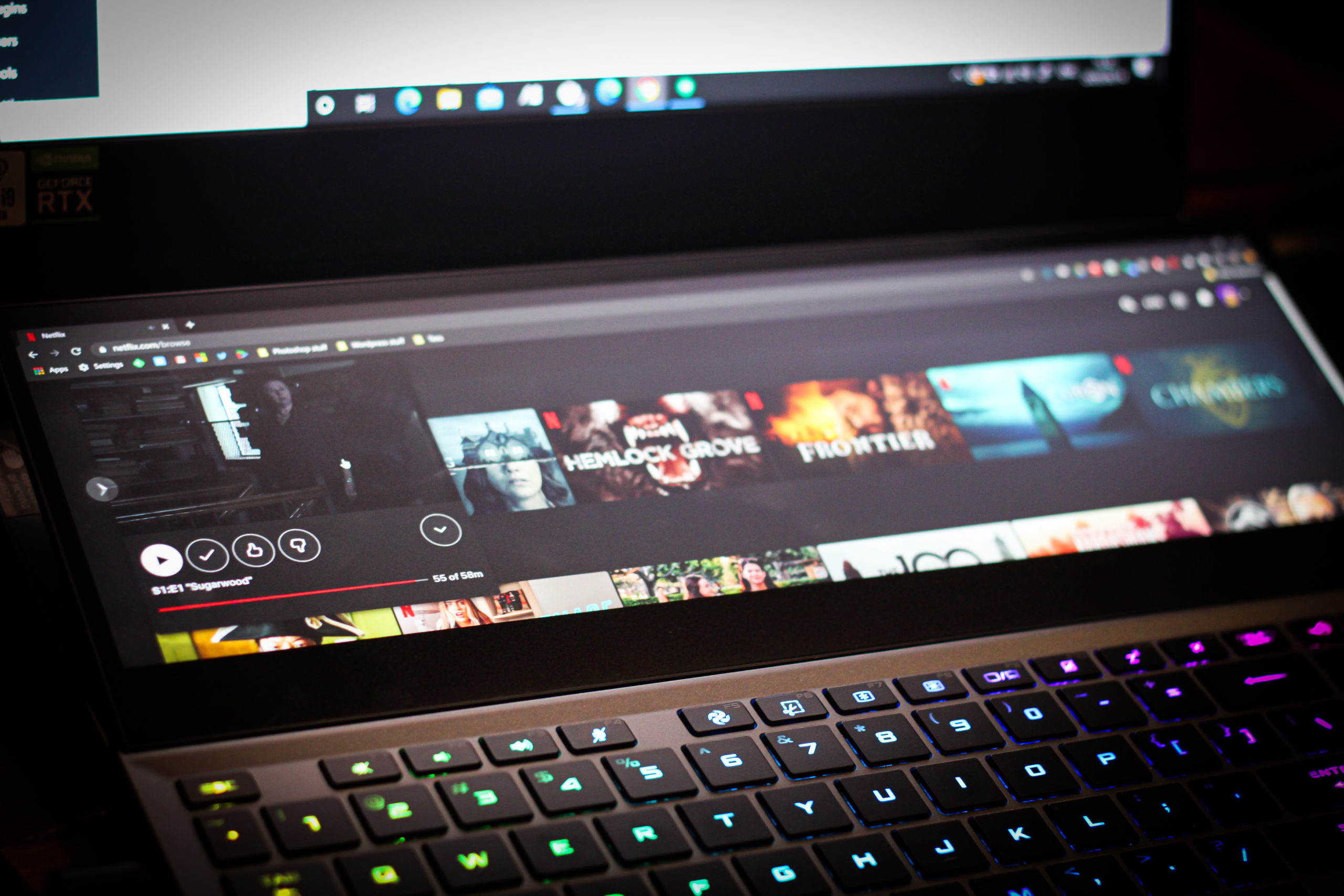 On the outside, the Zephyrus Duo 15 is fashionably minimalist, with a magnesium alloy chassis finished in subtly-glittery blue-grey and complemented with a glossy diagonal stripe. Opening up, its unpretentious exterior is instantly replaced with unicorn sparkle dream RGB glam, 4K razzle-dazzle, sci-fi nerdcore aesthetics, and the exhilarating prospect of playing games with everything dialled up to max because now I can. For about a week until Asus wants it back, that is, and I feel like this inevitable trauma that every hardware reviewer must endure, over and over, is a problem that we don’t talk about enough. OUR LOVE IS REAL, MOM.

Game performance is more or less exactly what you’d expect – the Zephyrus Duo 15 supports super-mega-ultra graphics modes in most games at 1920 x 1080, with a minimum of 60 frames per second. Bumping up to 4K can reduce that significantly, depending on the game – in Grounded, for example, it bombed to sub-20 rates – and for some reason, I had atrocious mouse latency in Deliver Us The Moon, even in the menus. And with the extra hardware load, this laptop gets hot and noisy fast despite (and because of, I suppose) a rocketship-level vent array, but that’s also more or less exactly what you’d expect so I can’t fault it too much on those terms. 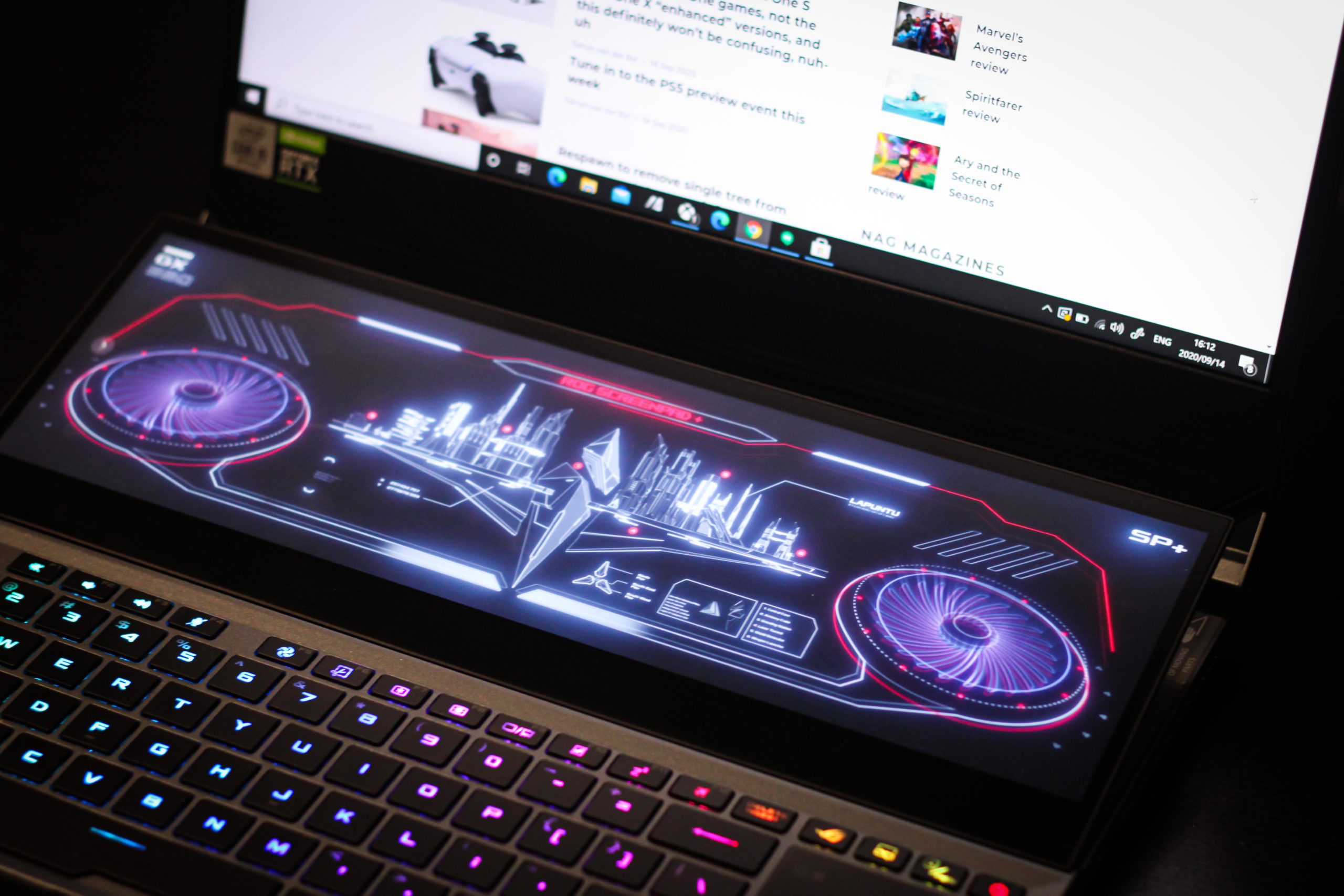 On battery, the Zephyrus Duo 15 is also more or less exactly what you’d expect, but with emphasis on the “more”, which is perhaps not what I expected. Launching a game instantly starts sucking up system resources, obviously, nuking the battery in 45 minutes, one hour tops. But browsing the internet and YouTube with a power saver profile enabled, I clocked about four to five hours before the battery quit. That’s not bad even for an office model laptop, but a gaming laptop with this spec? NOT BAD.

I have one major complaint about the Zephyrus Duo 15. If you’ve read some of my other laptop reviews, and you’re guessing it’s “egregious left-handed user discrimination”, guess what, you guessed it. Although its connectivity ports are located on the right-hand side (+XP), the trackpad is also on the right-hand side (-XP). I don’t ever use a trackpad, but it’s the principle of the thing. What if I’m stuck in a queue at the shops and I forgot my mouse at home and I need to get my /r/relationships drama fix? I’d have to use my phone instead, and people would think “why is she lugging this laptop with her if she’s just going to use her phone instead?” and that would be even more embarrassing than lugging a laptop with me to Checkers.

Asus Zephyrus Duo 15 gaming laptop
BOTTOM LINE
Selling your kidneys on the internet is an option...
PROS
The luxury yacht of gaming laptops
Two screens > one screen
CONS
For the sort of people who can afford a luxury yacht
Egregious left-handed user discrimination
97 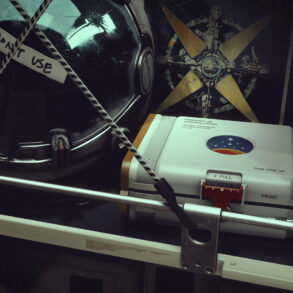