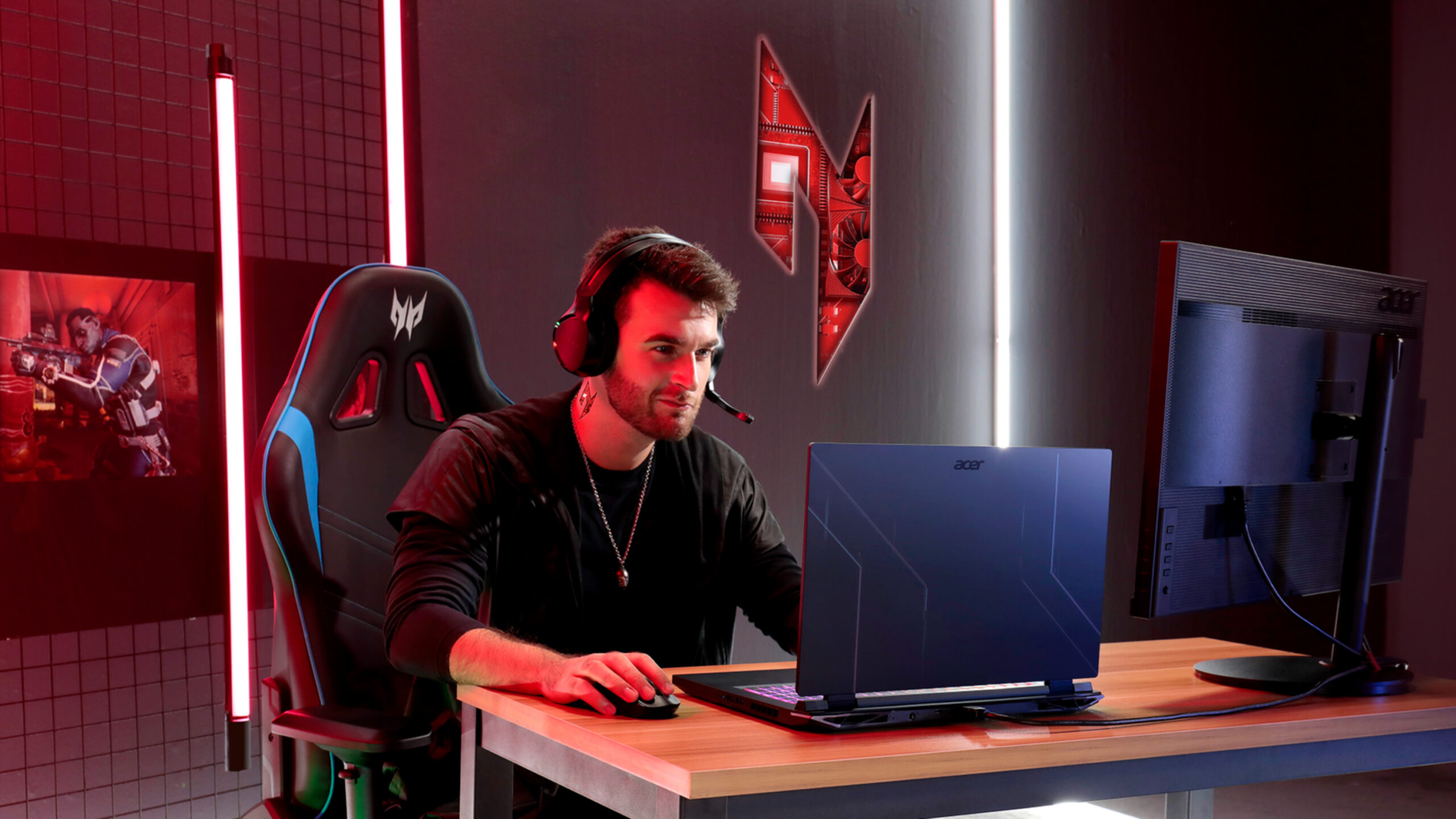 Acer announced refreshes across its lines of Predator and Nitro gaming laptops, starting off the year with new models of the Predator Triton 500 SE, Predator Helios 300 and Acer Nitro 5. All of the laptops feature the latest 12th Gen Intel Core processors and NVIDIA GeForce RTX 30 Series Laptop GPUs, while the Acer Nitro 5 also includes AMD Ryzen 6000 Series processor options. They also come with one month of Xbox Game Pass, giving gamers day-one access to popular titles and the ability to play with friends, whether they’re on PC or console.

“Our most popular gaming laptops have been updated with the latest silicon announced at CES,” said James Lin, General Manager, Notebooks, IT Products Business, Acer Inc. “Combine that with state-of-the-art cooling technology and high-refresh-rate displays and you get exciting laptops that even the most demanding of players will love.” 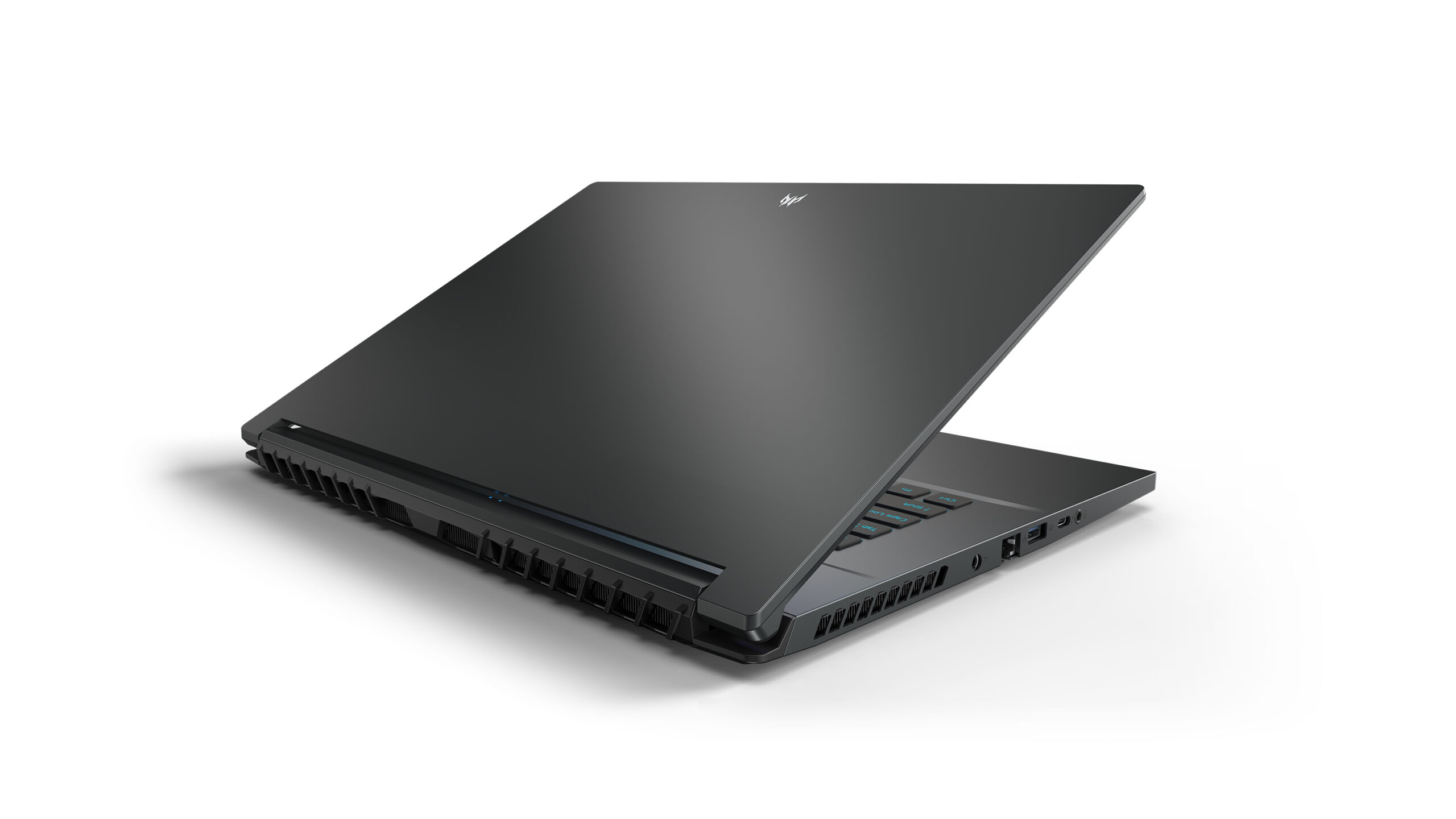 The Predator Triton 500 SE (PT516-52s) is a “special edition” laptop for gaming and work.  On the inside, up to a 12th Gen Intel® Core™ i9 processor, an NVIDIA® GeForce RTX™ 3080 Ti Laptop GPU and 32 GB of 5200 MHz LPDDR5 memory[[1]] dish out the extreme performance necessary for the latest games. On the outside, its all-metal[[2]] spartan-styled aesthetics let it blend perfectly into the workplace or lecture hall. Just 19.9 mm (0.75 in)[2,[3]] at its thinnest point, the laptop can go wherever users do, while up to 2TB of high-speed PCIe Gen4 storage offers plenty of space for games and files.

Backing up this powerful hardware is state-of-the-art cooling technology. The laptop utilizes a triple-fan system, including two 5th Gen AeroBlade™ 3D fans with 89 metal blades each. Acer’s Vortex Flow technology redirects the airflow those fans generate to critical components, while strategically-placed thermal foam, liquid-metal thermal grease on the CPU, and four heat pipes further improve cooling. Performance boost aside, this means that users won’t be feeling the heat while making the most of the long battery life granted by the laptop’s large 99.98 Wh battery.

The laptop runs Windows 11 out of the box and also features a full range of USB 3.2 Gen2 ports, including two Thunderbolt™ 4 Type-C ports with support for DisplayPort and power delivery[[5]], while an HDMI 2.1 port makes 4K@120 Hz possible by allowing users to plug into an external display. Topping everything off, an Intel® Killer™ E3100G 2.5G Ethernet Controller, Intel® Killer™ Wi-Fi 6E 1675 and Control Center 2.0 empower users with blazing fast connectivity. 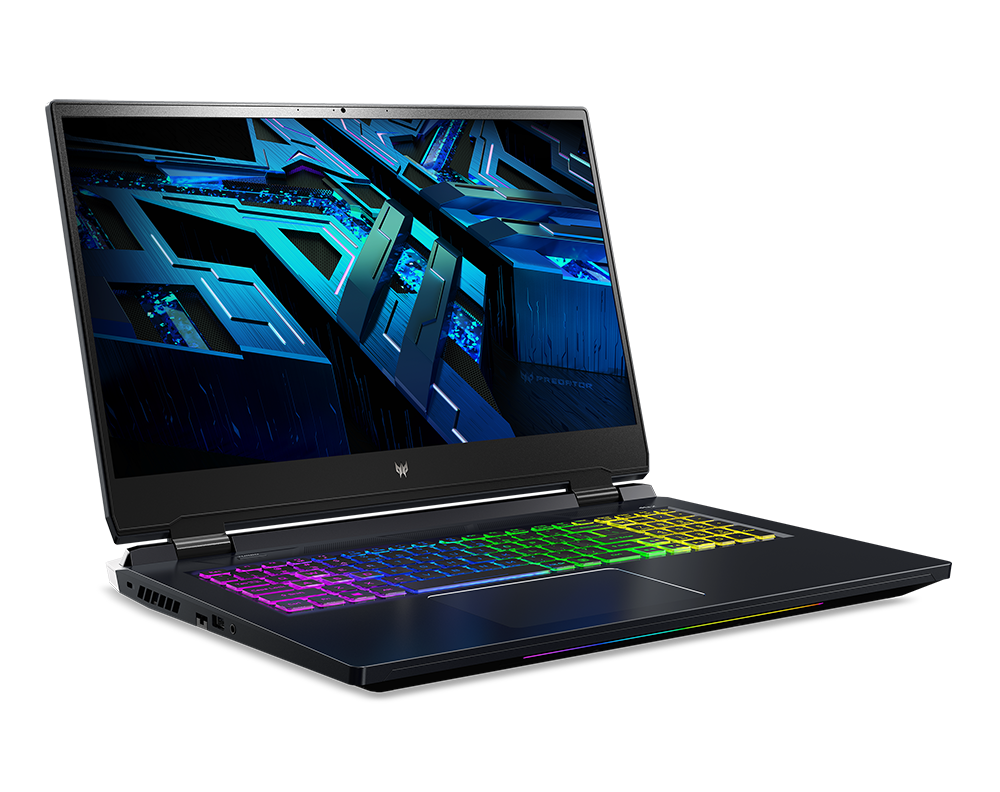 Predator Helios 300 — All About Performance

The Predator Helios 300 (PH315-55) is a powerful gaming laptop equipped with a host of top-tier hardware: Up to a 12th Gen Intel Core  i7 processor, NVIDIA GeForce RTX 3080 Laptop GPU or NVIDIA GeForce RTX 3070 Ti Laptop GPU, 32 GB of DDR5-4800 MHz memory and up to 2 TB of PCIe Gen4 SSD RAID 0 storage. This hardware muscle powers up to a 15.6-inch QHD (2560 x 1440) IPS[1] display with a 165 Hz refresh rate—and with a revamped, cleaner chassis, the outside of the laptop looks great, too. A thin light bar below the palm rest (configurable via PredatorSense) lets the device retain its gamer aesthetic in a slightly more subtle fashion.

Running Windows 11, the laptop comes with Killer DoubleShot Pro (E2600+1675i) and WiFi 6E connectivity in addition to a healthy range of ports, including an HDMI 2.1 for connecting to external monitors or consoles, a Thunderbolt™ Type-C port, and two USB 3.2 Gen2 ports, one of which allows users to charge a mobile device even if the laptop is turned off. 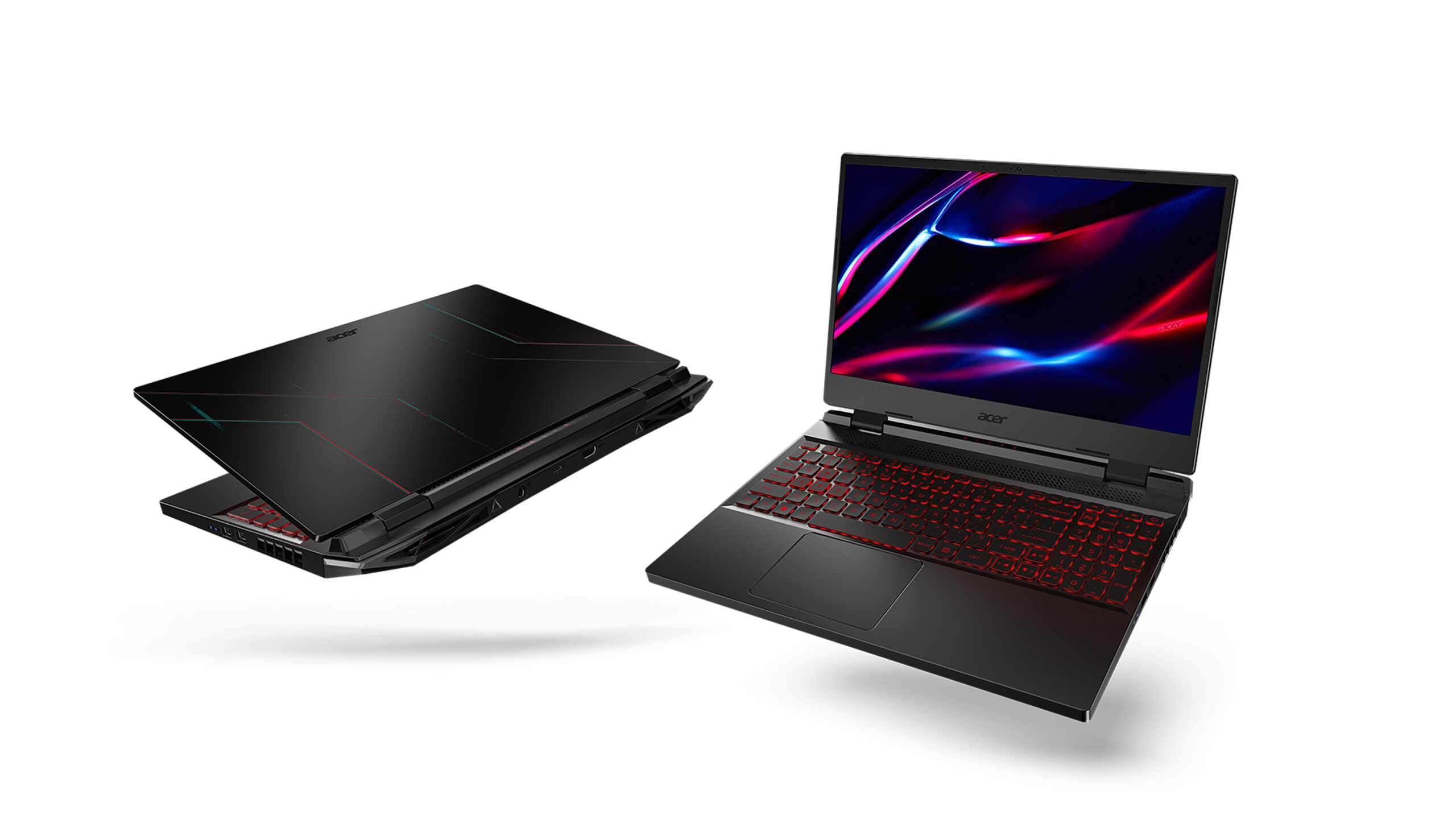 The Acer Nitro 5 is a gaming laptop that gives players everything they need to explore and enjoy the latest titles, featuring up to a 12th Gen Intel® Core™ i7 (AN515-58) and up to an NVIDIA GeForce RTX 3070 Ti GPU. A pair of M.2 SSD slots (PCIe Gen 4) offer massive storage, while up to 32 GB of DDR4 3200 RAM offers players plenty of breathing room to handle multiple applications at once. Combined with a QHD 165 Hz panel that has a 3 ms[5] response time, the Nitro 5 delivers pleasantly fluid gameplay. For further control, Killer™ Ethernet E2600[2] and Intel® Killer™ Wi-Fi 6 AX1650i lets players make their network prioritize game traffic for even faster connectivity when every second counts.

The Acer Nitro 5 can also be equipped with up to an AMD Ryzen 6000™ Series processor (AN515-46) and up to an NVIDIA GeForce RTX 3070 Ti Laptop GPU, plus up to 32 GB of the latest-generation DDR5 4800 MHz RAM. This generation of the Nitro 5 comes with two options, an FHD 144 Hz panel or a 165 Hz QHD Panel, both taking advantage of AMD FreeSync™ technology[[6]] to offer smooth gameplay without screen tearing. Storage-wise, the AMD processor-powered Nitro 5 features two M.2 PCIe Gen 4 SSD slots (PCIe® Gen4 x1, PCIe® Gen3 x1).

It also comes with Windows 11 and a redesigned chassis that features dual-fan cooling, an intake on both the chassis’ top and bottom, and four exhaust ports. Users needing more or less cooling power can control fan speeds with the NitroSense utility app, a built-in software solution that also enables users to overclock[[7]] their CPU/GPU and customize the 4-zone RGB keyboard’s lighting.

Completing the gameplay experience, DTS:X® Ultra audio deepens their immersion by delivering clear sounds that can be delivered in a 3D spatial soundscape. This technology also translates into a competitive edge, enabling players to hear exactly where an opponent is coming from. Users wanting to play with headphones and other peripherals will enjoy the Nitro 5’s full range of ports, including HDMI 2.1 and support for both USB 3.2 Gen 1 and Gen 2. The Intel-powered model also includes a Thunderbolt™ 4 Type-C port. The AMD-powered model includes USB® 4.

[1] Specifications may vary depending on model and/or region. All models subject to availability.

[2] Only top, base and bottom cover are metal. The frame area is ABS plastic.

[5] Delivers up to 3 A at 5 V DC for USB charging. DC-in: requires power adapter or power source providing 65W at 20 V. For optimal performance please use a certified Acer power adapter or USB Power Delivery device.

[7] AMD’s product warranty does not cover damages caused by overclocking, even when overclocking is enabled via AMD hardware and/or software. GD-26. 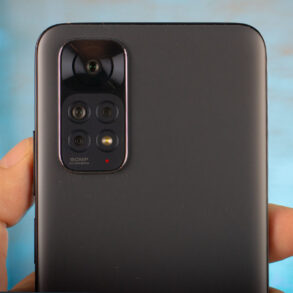