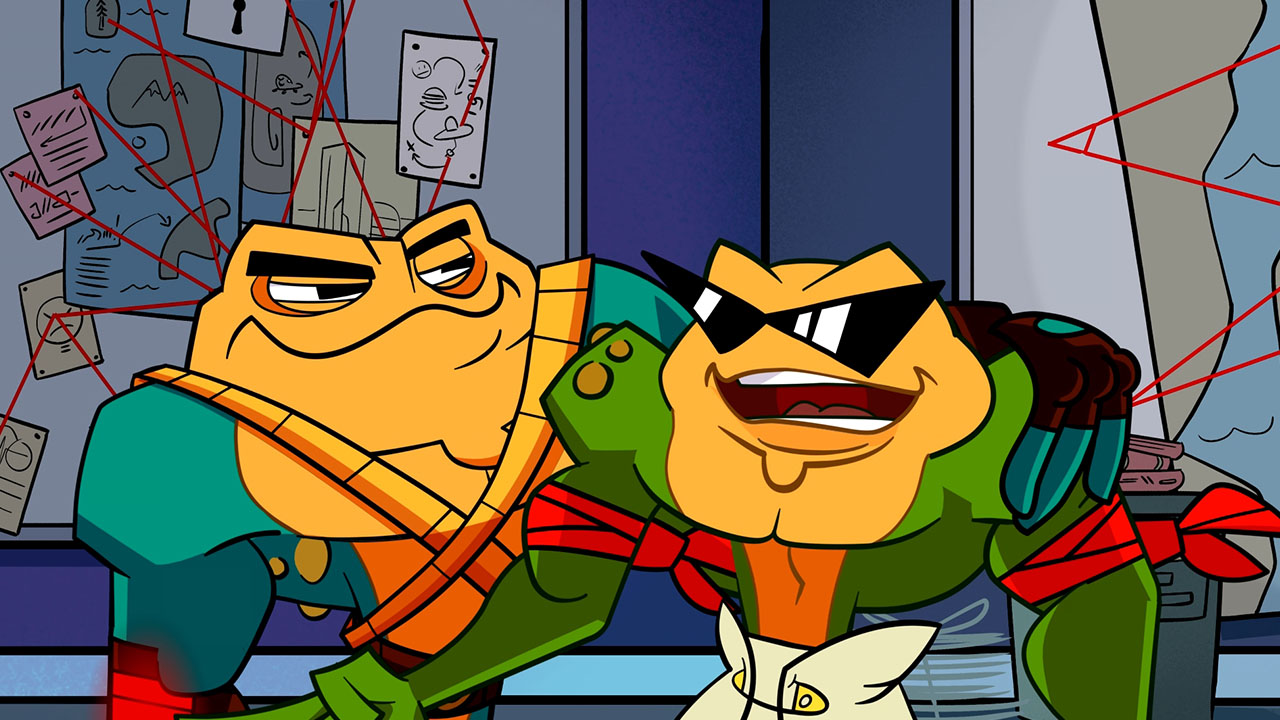 Confession time: I never grew up on Battletoads. In fact, the only reason I even know about the franchise is because of my partner instantly going on about it for the last 12 years of our relationship. So the moment I signed up for Xbox Game Pass and saw Battletoads among the collection, it was a no-brainer that I’d be the best partner and download it for us to play. And oh boy, am I glad I did.

Let me first enthral you with all my hesitations towards beat-em-up games. Mostly, they always have abysmal controls combined with highly unbalanced gameplay and unfair difficulty levels that require godlike reflexes to pass—something I do not possess. That is why I tend to avoid beat-em-ups like the plague. But after the roaring success of TNMT: Shredders Revenge and the hope that if I played Battletoads, it would stop my partner from constantly bringing it up in conversation, I decided to push my concerns aside and give the game a chance.

For anyone on the fence about the genre like me, let me summarize the game before we even go any further:

Battletoads is balanced. Fair. Infuriating. Simple and so much freaking fun that I can’t believe I’ve never experienced the franchise before. Battletoads is everything my partner has spent the last 12 years carrying on and much more. 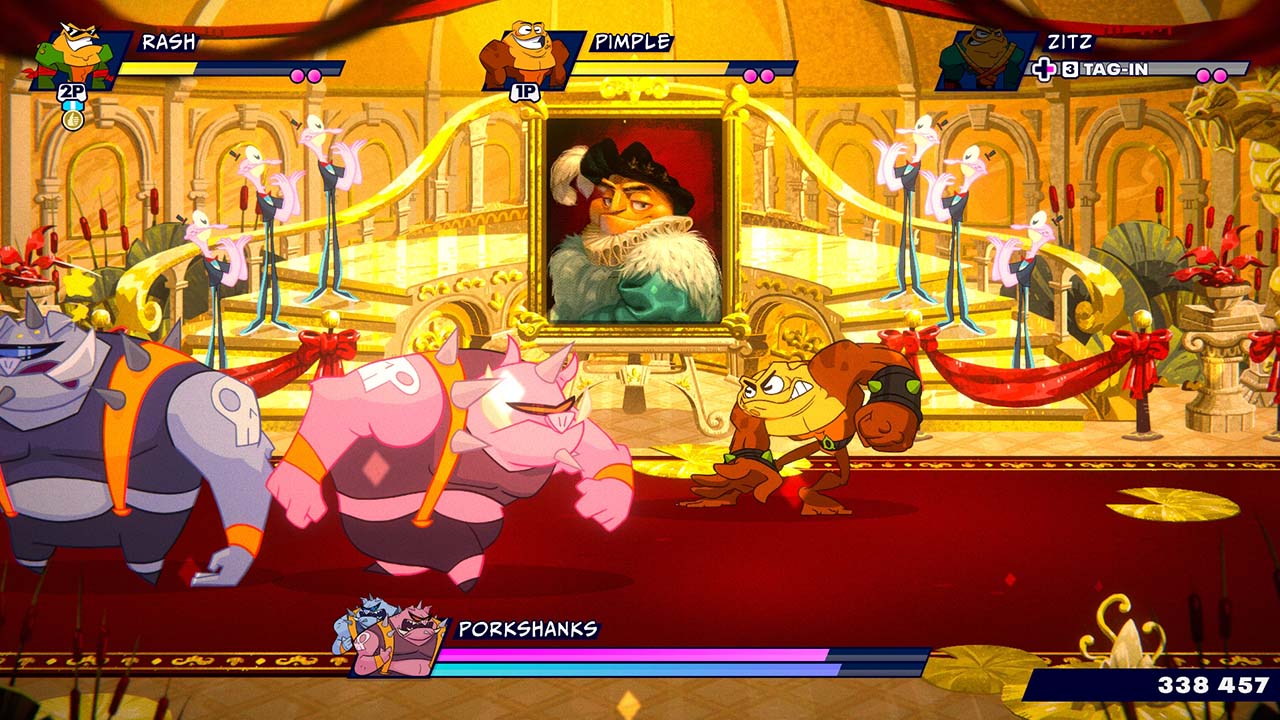 The first thing that jumped out to me immediately was how explosively colourful and fun the art style was. It’s not often that I’ll play a game that takes me out of my comfort zone and yet sit there with a goofy smile, yet that’s exactly what I did here. Looking at Battletoads on the screen is comparable to the feeling I used to get watching cartoons as a child – overstimulated in all the right ways.

The story is presented in the classic Saturday morning cartoon format and centres around a trio of frogs, Rash, Zitz, and Pimple (and yes, those names had me giggling like a fool). The trio have been trapped in an alternate reality where they’ve been worshipped as heroes for the past 26 years before returning to the regular world and hating every second of it. Now the toads want to be famous again and are on a quest to achieve just that.

I’d be remiss not to talk about the combat in a game almost exclusively focused on it. Thankfully for me, the combat never becomes too complicated, and so long as you can bash X, Y and A, you should be fine. Now “technically”, each button has its own function, with X being your basic attack, Y throwing enemies into the air, and A being a jump with the order in which you press the buttons triggering different combo attacks. But who has time to think of these things when playing a game that feels like it’s on X100 speed? My solution: blindly bash buttons and be wowed when something cool triggers… to the horror of my partner, who did have time to strategize and think…

The game can be played solo or with up to three players, each controlling one of the three toads, and each has its own playstyle. Pimple is slow but hits the hardest, Zitz is lightning fast but doesn’t have much strength, and Rash is a combination of the other two – a.k.a. the best character. 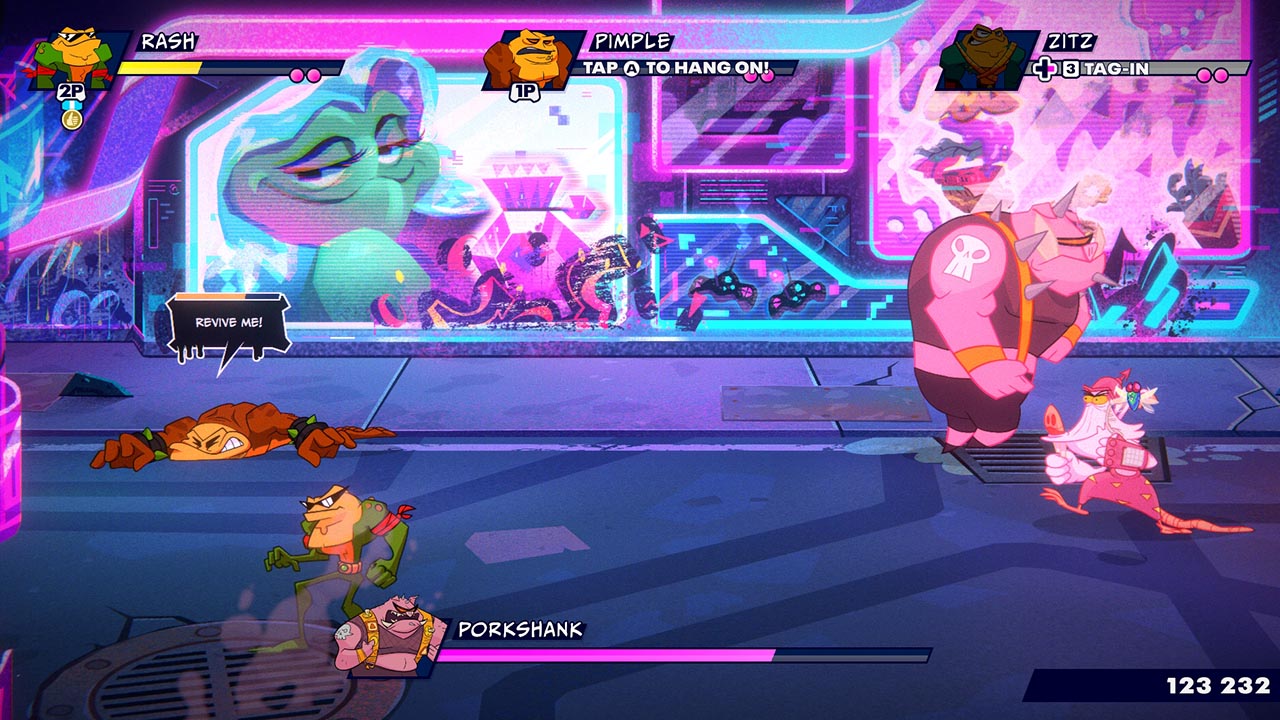 One of the biggest draws for me in the game was the stupidly fun collection of minigames scattered throughout the levels. Whenever I was tired of fighting, a random minigame would be thrown my way. These games would see me hack something, complete my daily work at the office or try to stay alive while driving too fast on a bike. By the end of the game’s roughly five-hour campaign, it was these minigames I found myself missing more than anything else.

Now, whenever it comes to Beat-Em-Ups, a genre I’m notoriously untalented at, it’s important to me that there are difficulty levels; otherwise, I’m better off just sitting there with an unplugged controller pretending to play. Thankfully, Battletoads had my back with difficulty settings, of which there are three. First up, you have Tadpole, which is Easy (the way I would prefer to play the game), Toad, which is Normal (the setting my partner insisted on) and Battletoad, which is hard, a.k.a. there is a better chance of kissing a frog and it turning into a prince than there is of me completing the game at this difficulty.

Even though I experienced the game at Toad difficulty, I found the experience to be pretty smooth – challenging but never impossible thanks to the game’s very forgiving checkpoint system and if I had to suggest a difficulty that was equal parts entertaining and challenging, this would be it – even when you’re burdened with two left hands, like me. 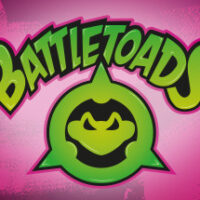 Battletoads
BOTTOM LINE
After putting it off for the last 12 years, I finally decided to give Battletoads a chance and oh boy, am I glad that I did. According to my partner, who played the original, this game takes everything that made Battletoads good and improves upon it, with the result being a more accessible and less frustrating game. According to me, who has only ever played this title, Battletoads is funny, entertaining, and one of the best Beat-Em-Ups I've played.
PROS
The colours and the art is everything I need in my life
A really good balance between fighting and minigames
Enough goofy shenanigans to make me forget my dislike for the genre
CONS
At 5 hours, the champaign is pretty short
There isn't much repeatability - when the game is done, it's done
90 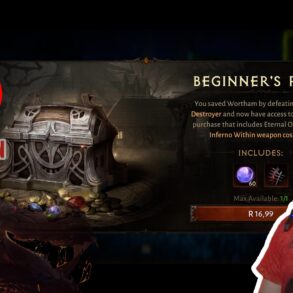 THE NAG SHOW EP 3: Diablo Immortal is a joke, Rob Forbes is an Apex Legend and ChaniZA is the AI overlord.
×