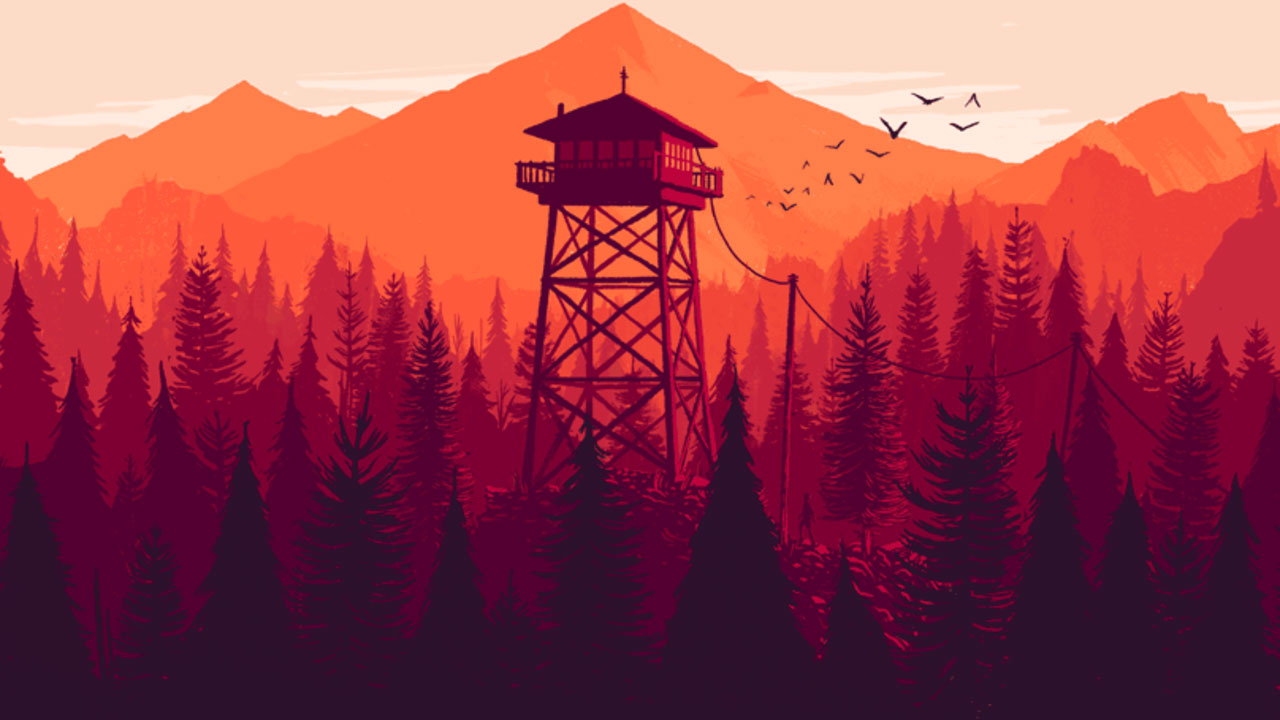 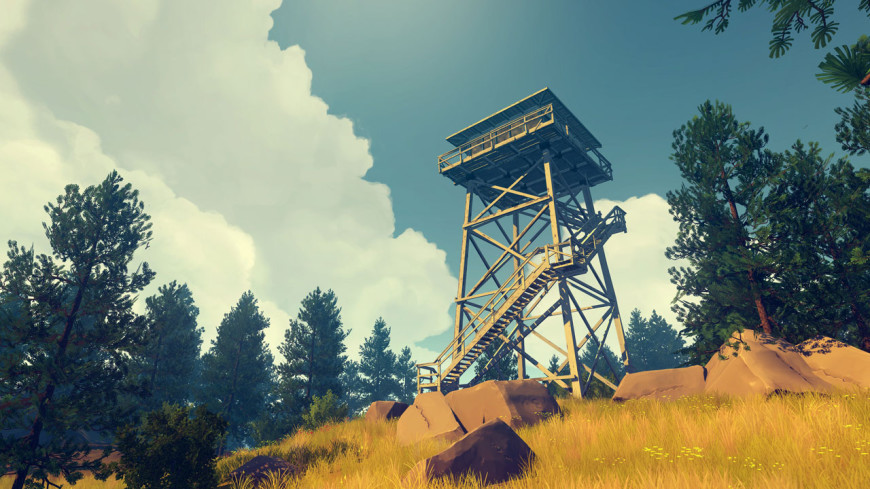 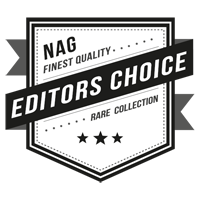 The game’s opening simply and elegantly sets up the story of why protagonist Henry ends up in the Wyoming wilderness. I’d rather not spoil the impact with any more detail, but it brilliantly walks the line between being tragic and beautiful, such that it’s simultaneously lighthearted and sentimental. Less-skilled writers would’ve made it heavy-handed and cheesy, but in Firewatch it’s sublime.

The game begins in earnest with you in your watchtower, with Delilah – your companion in the game – squawking at you to pick up your walkie-talkie. As is the case in all your communications with Delilah, you can choose between a set of three possible responses, or choose to not respond at all.

I’d like to say that the choices you make here have a major impact on the game, but they don’t. The choices are not so much courses of action, but styles of response. Delilah is a wise-cracking older woman who uses jokes to hide her vulnerabilities, and protagonist Henry is in many ways whoever you want him to be. 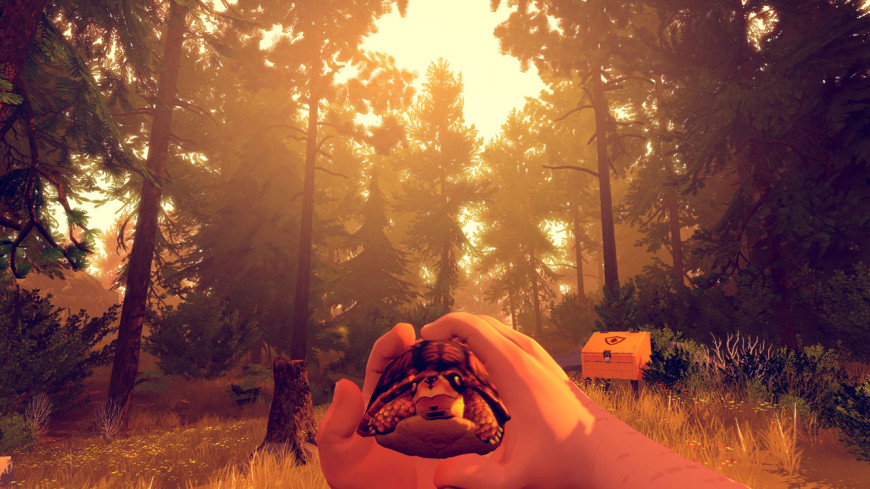 The foundation you’re given is a nearing-middle-aged man searching for meaning in the forest while escaping the difficulties of life back home, but the choices allow you to craft your character to be anything from a slightly uptight but emotional individual who can match wits with Delilah to a callous asshole who only looks out for himself. No matter which way you play it, you’ll find your character’s own vulnerabilities and cracks will show through – whether or not you choose to share that part of yourself with Delilah.

The system is not without flaws, however. If you play the game in an honest manner you’ll find the story and dialogue unfolds beautifully, and the relationship between Henry and Delilah is believable and charmingly written. If, however, you choose to entirely ignore Delilah or be unilaterally mean to her, certain actions or responses from her side won’t make a whole lot of sense.

Some players may be frustrated by the lack of impact the choices actually have, but that might be missing the point. How you respond to Delilah becomes deeply personal in a way, an extension of yourself rather than the actions of a character. If you immerse yourself in this game, you’ll find yourself really caring about the characters, rooting for them and building their relationship. 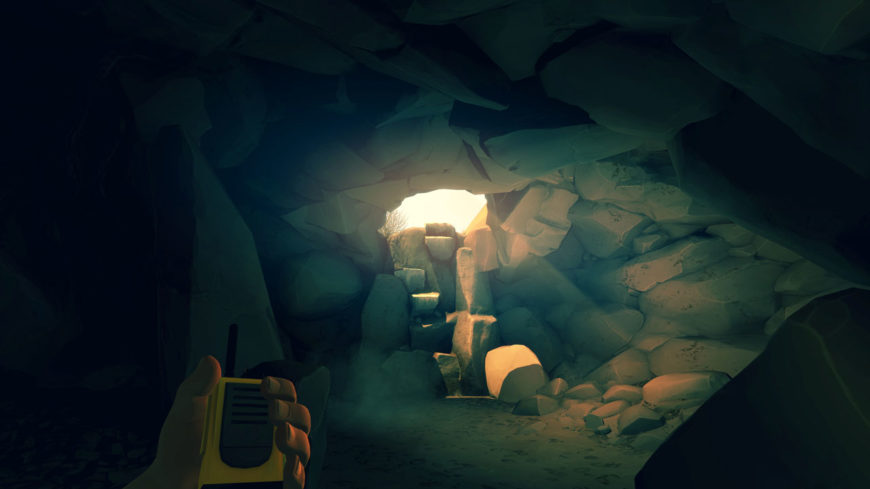 This is achieved by some of the best writing I’ve seen in a video game in recent years, possibly ever, bolstered by sublime voice acting that provides an emotionally nuanced narrative that is wholly believable, and never tedious or boring.

The dialogue keeps the experience enjoyable throughout, but the story is what gets its hooks into you early and doesn’t let go ‘til the end. Things start out innocently enough, with Delilah sending you out to reprimand some kids playing with fireworks. Movement in the game is not quite as free as you might expect, with a large amount of impassable terrain forcing you along specific paths to reach where you need to be. While this does make the game more linear than a true sandbox, it’s never implausible. There aren’t invisible walls arbitrarily blocking movement, but there are steep cliffs Henry is unwilling to throw himself off of and big tangles of overgrowth no sane human would attempt to climb over or through.

Navigation is achieved with a map and compass rather than a giant floating arrow or radar system, which in spite of being occasionally annoying does add a layer of immersion that feels genuine. After an hour in Firewatch you really do feel like an emotionally tortured man trying to find some answers on the hiking trails of Wyoming. 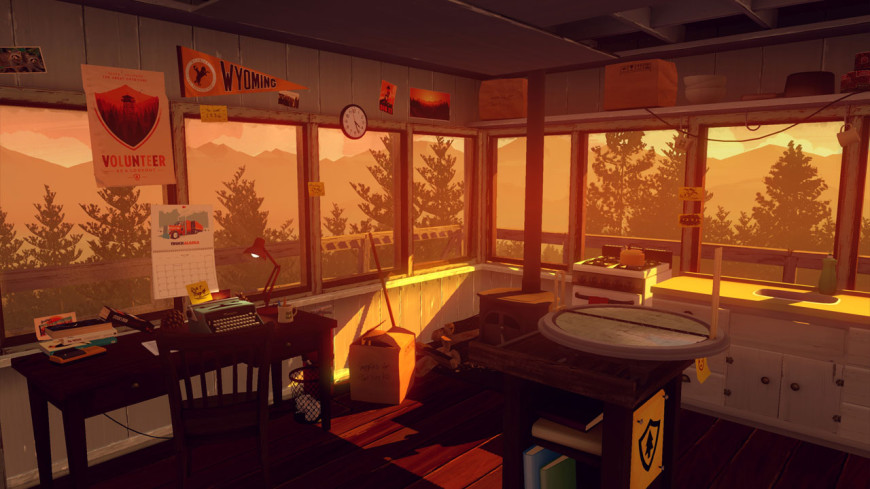 You do spend a lot of time walking. Most of the game is walking from place to place, either in search of an answer or to complete a task. This might sound tedious, but it isn’t. This is partly because the environment is just so damn beautiful to look at and enjoyable to walk through, and partly because Delilah provides constant entertainment along the way.

The game never feels like a grind, and sometimes you surrender yourself to a long hike across the map only to have some event interrupt things halfway. Without giving anything away, what starts out as seemingly mundane tasks (like reprimanding teenagers) quickly begins to reveal a greater conspiracy as the story unravels.

The writers do a wonderful job of gradually raising the stakes, until the characters’ paranoia and anxiety boils over to near-panic towards the end of the game – a paranoia which you feel right alongside them. One of the best things about this game is that it manages to scare you without ever really putting you at risk. There’s no combat, no death and no difficulty. You can’t fall off a cliff even if you want to, and whatever does happen to you is outside your control. You’re simply experiencing the story as you roam the world. But – and this is a big but – once that paranoia reaches fever pitch I challenge you to try walk into a gloomy cave without taking a deep, cautious breath first.

This brings us to the most controversial part of the game – the ending. It is, on the surface, a little weak, and doesn’t really tie things up quite as neatly as it seems to for the characters. It fits together in broad strokes, but certain earlier threads don’t quite find their place in the final weave.

Personally, I can’t shake the suspicion that the ending is not all that it seems. When played through again, when considered a little more carefully, certain events start to coalesce and paint a conspiracy deeper than the one revealed at the end. It’s the kind of thing discussion boards sink their teeth into, and it leaves you with a certain level of uncomfortable doubt once all is said and done.

Even if the ending does leave you cold, the journey to get there is so damn enjoyable that it probably won’t bother you all that much. In a way, the story serves as a vehicle to develop Henry and Delilah’s relationship, which is where this game really shines.

In spite of its flaws (of which there are few), I highly recommend that you embark on this journey through the woods of Wyoming.

85Firewatch isn’t without flaws, but it’s a masterclass in narrative-driven gaming that grabs you tightly and never lets go. 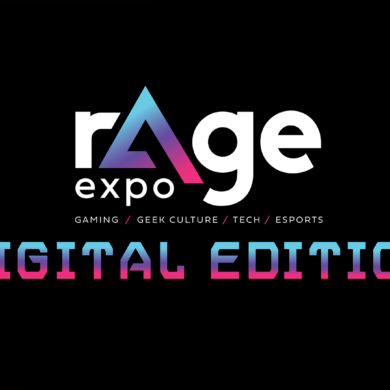