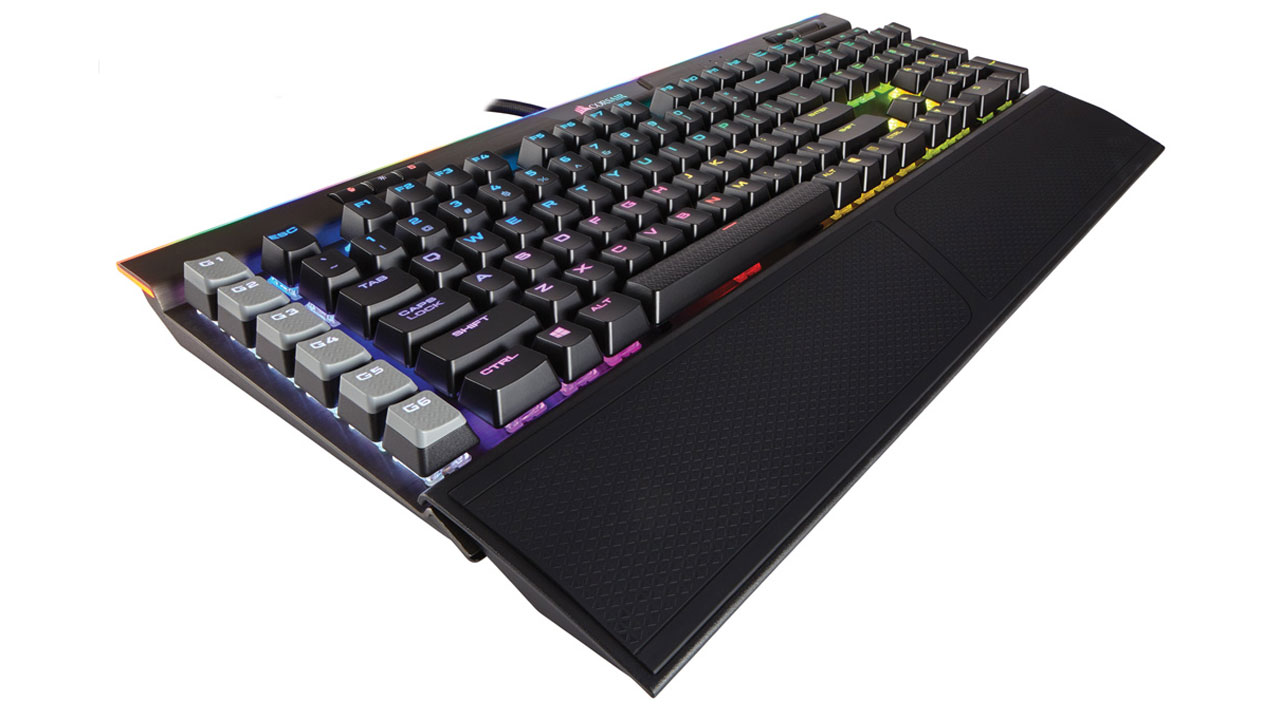 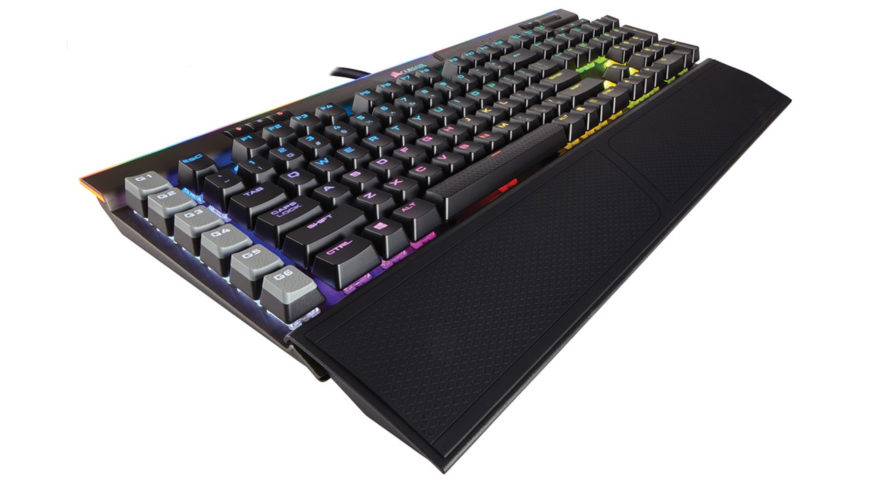 After writing so many keyboard reviews, I’ve officially accepted that it’s almost impossible to write objectively about any keyboard targeted towards “gamers”. The term is broad, if not entirely meaningless, and the peripherals concerned aren’t always specifically going to appeal to everyone who’s considered a “gamer”. 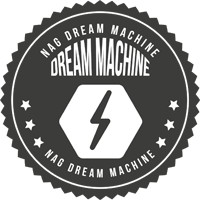 This isn’t unique to keyboards, as it holds true for mice and game controllers as well. Their performance and your ability to make use of the touted features is entirely dependent on the individual. Many keyboards seem to tick all the right boxes, but often fail to move you in one way or the other. Some you may even find highly attractive at first glance, but simply don’t find them compelling enough to spend money on. As such, keyboards (at least to me) have come to be about aesthetics, feel, and how loud they are. These things are ultimately what make a keyboard stand the test of time. I know many keyboard vendors would bemoan this statement, but it holds true, because if you ignore all the LEDs and various mechanical key types, a keyboard is still simply a keyboard.

As such, it’s not enough to simply boast a list of features which are haphazardly put together to produce yet another product catering to the gaming demographic. And yet, that’s precisely what happens, and this phenomenon is what makes products like Corsair’s K95 Platinum stand out. There’s more to it than just LEDs, switches and macro keys.

Sure, it has all these, but it doesn’t feel contrived, and that’s why I’m impressed by what Corsair has put together with the K95, more so than I’ve been with their previous K90-series attempts. In fact, barring perhaps the Strafe with its MX Silent switches, the K95 Platinum has become my favourite keyboard to use. The MX Speed switches are great, and they feel even better when paired with the K95 Platinum’s aluminium frame. That said, it’s the direction Corsair has taken with the K95 that I find most rewarding. I’m not saying it’s the perfect keyboard, as I’ve never come across one and this isn’t it for sure, but as far as attempts go this is the closest to date.

How did I come to this conclusion? Well, it’s simple. Consider the differences between this newest iteration and the previous K95. The previous K95 RGB remains a lot closer to the original K90 by comparison, whereas the K95 Platinum is better explained as an expanded K70, as opposed to a smaller K95 RGB. Gone are the numerous macro keys, replaced with six dedicated keys. A separate profile-switching key means you can have up to 18 macros spread across these six keys. In my experience, I’ve never needed macro keys, and whenever I did it was only a couple at most – which you’re better off programming to some other standard key anyway. In other words, there’s nothing lost there, and if anything the K95 actually looks better with these new dimensions.

Another obvious change (but one that isn’t as readily noticeable) is the lighting, which has been further improved upon over previous models. Corsair has gone through several RGB generations of keyboards and this is the best we’ve had. The LEDs are brighter (or maybe the key caps are letting through more light, or maybe it’s a combination of both), they deliver better colour, and the LEDs don’t die randomly, as was the case with the original K90 keyboards. The lighting’s functionality hasn’t changed much, but considering we’re talking about LEDs on a keyboard, that’s to be expected. There’s nothing here that wasn’t available before insofar as patterns and the like are concerned. What has changed, however, is how you configure it, and to that end, let’s talk about the new CUE software. This is an area that’s seen just as much growth as the actual keyboard (and perhaps even more), as CUE is at the core of many Corsair products. 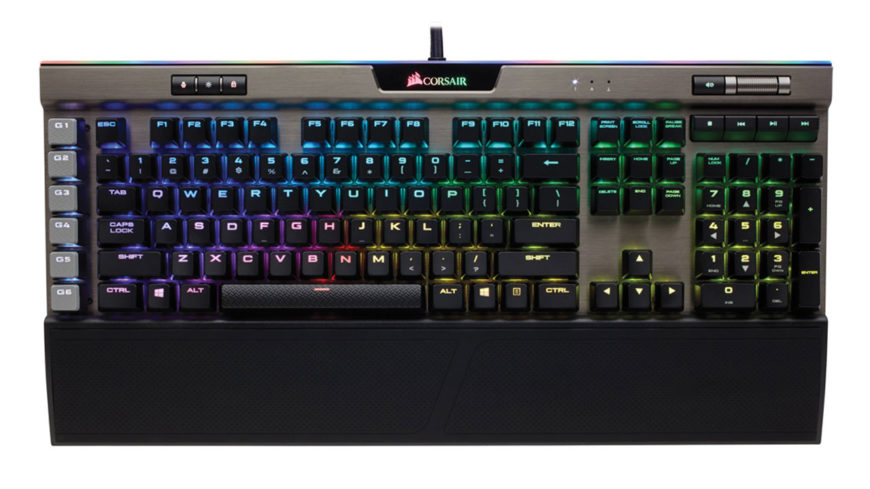 The programmability and customization it offers is unprecedented, and the little issues I had with previous versions have largely been eliminated. What remains is a level of software complexity which can’t be hidden due to just how much customization is available. Thankfully, Corsair has simplified the interface in a manner that masks a lot of the detail behind easy-to-understand screens. Still, this is a software package you’re going to have to learn in order to take full advantage of what’s offered by the K95 Platinum. It’s not just a matter of setting colours, but matching specific key functions, combinations and delays to achieve the desired effects. Depending on the game or application, you could literally assign repetitive tasks performed via a series of keys into to a single macro action and attach it to any key you desire. This is functionality that’s been around for a while, sure, but it’s better presented here.

Also, remember that profile key I mentioned earlier? With 8MB of onboard memory, the Platinum allows you to take your profiles wherever you go. No longer are you forced to install CUE on every computer you use. Simply attach your keyboard and you’re good to go.

That isn’t what moved me about the Platinum though, as you can have all of the above with any of the K70s, minus several dedicated function and macro keys. What really made me pay attention to the K95 Platinum is the build quality. It’s tough to relate just how impressive it is via text, or even in video. When it comes to keyboards, no mainstream vendor builds them like Corsair does. The weight, its distribution and the overall finish speak volumes. Few (if any) keyboards competing in the same space manage to pull this off. Explaining exactly why it’s in a league of its own is challenging, because it’s the result of a culmination of factors – but it could all come down to something as simple as how the keyboard presents itself.

For example, gone is the generic brown box within which all Corsair keyboards were previously packaged. This presentation has been improved through humble means, like the inner box that now carries an embossed Corsair sails logo. This by itself doesn’t mean anything, but as you unwrap each piece of packaging, it’s the little things like this which make you aware of the fact that you’ve just bought the finest keyboard around. The unboxing experience itself feels special in a way that tick-box features can’t deliver by themselves. I would argue though that this should be the standard unboxing experience you get when buying such a hellishly expensive keyboard. It’s almost R3,000 and as such every bit that goes into making it feel special helps make a case for the high price. 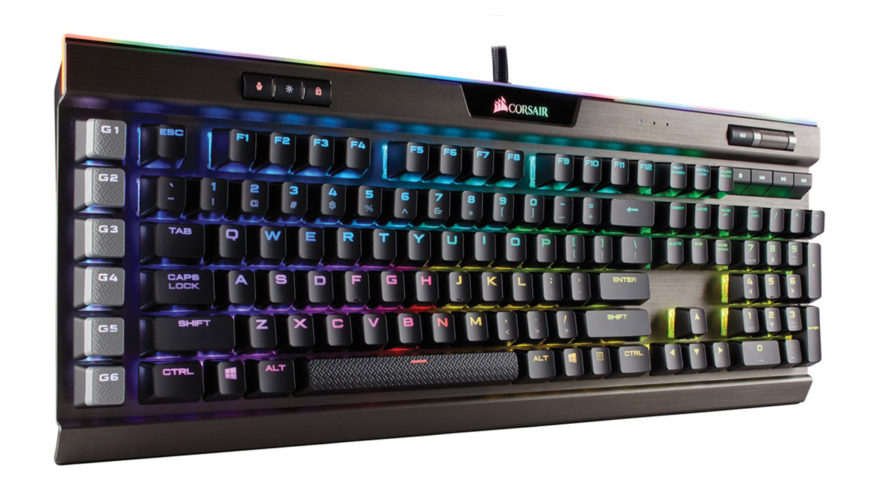 That said, it’s not perfect, even though many of the previous problems Corsair’s had have been ironed out. My personal pet peeve – the lack of dual USB ports – persists. Corsair insists on its super-stiff braided cable, which houses two smaller cables, which in turn occupy two USB ports. Despite the extra juice, you still only get one USB passthrough. So either your mouse is plugged in or a flash drive is, but never both. It’s a wasted opportunity, as just one more port would go a long way towards making an already great keyboard even better.

Another thing I noticed is that as much as the LED lighting has been improved, around the edges and corners of what I call the light bar of the keyboard (i.e. where the light strip is situated), the LEDs aren’t able to pull off the most basic of configurations: a pure white glow. You’ll always get some blue, green and other hues coming through. Pure white is impossible. I’m unsure as to what causes this, but once you notice this on your brand-new R3,000 keyboard, it’ll sully the experience. Thankfully, every other colour configuration works.

Other than these two issues, there’s nothing that I’d find objectionable with the K95 Platinum’s design. As I said before, every feature presented here you could point to as being available on another keyboard. The issue is that no other keyboard offers this much attention to detail, build quality and software support. It’s this specific combination that makes the K95 Platinum’s price tag plausible. This keyboard is without a doubt the premium model that deserves to be used alongside an ultra-high-end PC or notebook. I fully appreciate the approach that Corsair has taken. The K95 Platinum isn’t purely selling its RGB features, even though they’ve become strikingly advanced. Instead, it’s selling an entire experience. The detachable, magnetic, soft-touch wrist rest is one such thing that adds to the experience. It seems such a modest thing, but again, it’s executed incredibly well (save for how easily it gets dirty) and is easy to appreciate after hours of gaming or typing. If you’re unhappy with how it feels, simply turn it over and you’ll get a different texture which may be a better match for you.

It’s the little things and how they all come together that creates the real draw of this keyboard. Available in gunmetal grey and black, this is the definitive keyboard from CORSAIR – at least until a newer model arrives in future. Now, if only there was a mouse that could match this level of quality, functionality and sheer presence from Corsair. The Glaive could be the closest attempt yet, but for a mouse to have the same presence on my desk as the K95 Platinum, Corsair may need something a little more special, because this is easily the best keyboard money can buy.

8You won’t find a better, higher-quality keyboard than the K95 RGB Platinum. If you have the cash, you won’t regret it. 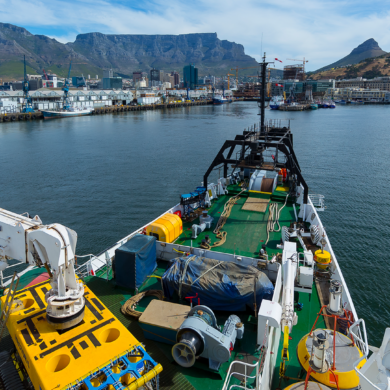