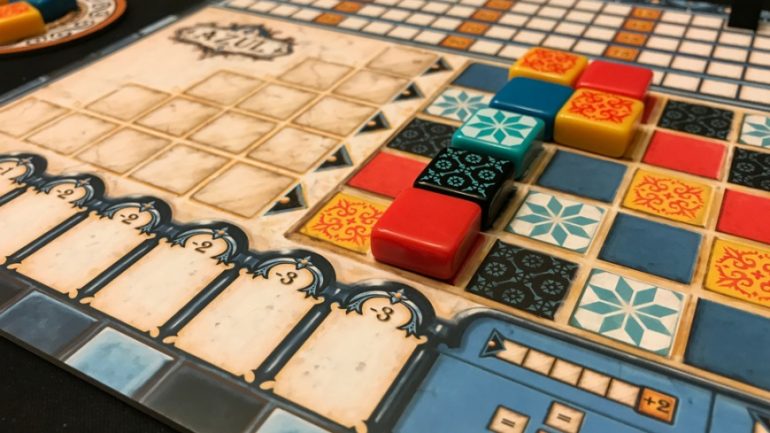 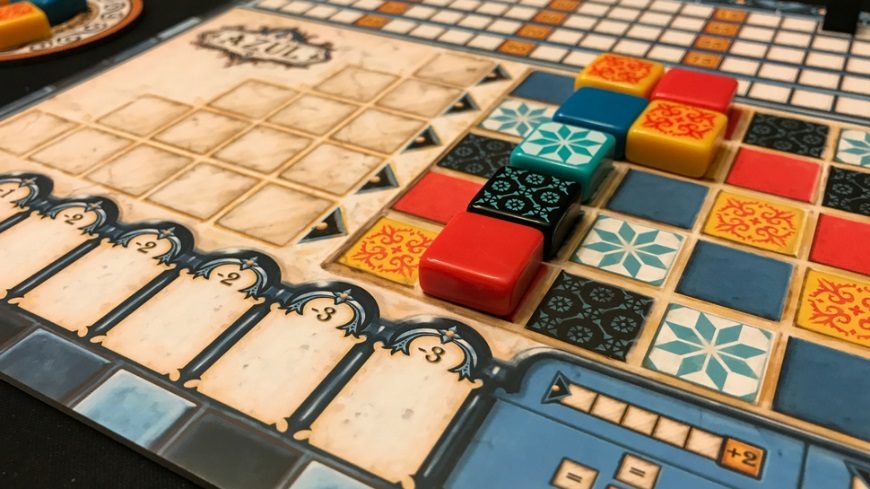 Abstracts get kind of a bad rap. What is an “abstract” you ask me, reluctantly, your eyes already glazing over in the uncomfortable discovery that boardgame jargon exists.

“Abstracts” are games like Chess or Backgammon – games that typically don’t bother with a theme, usually are somewhat deterministic and rely very little on luck or hidden information. They also tend to have simple rulesets with a lot of depth to the actual gameplay.

Now if you think you hate games like that, don’t run just yet. I’m here to spread the good word of Azul, an abstract that isn’t just incredibly fun, but one that plays up to four players and looks gorgeous on the table. It’s the abstract game for people who hate abstract games. It’s also one of the best games released last year.

The beauty of Azul (aside from the physical), is just how adaptable it is. One could make a case for this being the game you’d choose if you could only own one.

You can play it with your parents, or with people who’ve never so much as played solitaire. Similarly, you can play it with hardcore gamers, where it’ll become a fierce contest. It can be a brutal head-to-head game, or accommodate a family.

Alright, enough with the hard sell; I’ll tell you how it works. Players will take tiles from the center of the table, attempting to arrange them on their board in a way that will maximize points – be it by having multiple adjacent tiles, or completing rows or columns.

The rub lies in the fact that you can only take one type of tile (of five types), and you must take all of that type from one of the seven “factories” in the middle of the table, four tiles each. Each time you take tiles from one of the factories, all the rest go to the center of the table, which forms a “factory” of its own.

Each player has five rows on their board, with 1 to 5 spaces. Fill the entire row, you get to slide one of the tiles across to your scoring area. Each scoring row can only take one of each type of tile, however.

This means as the game goes on, you could stick that bastard Steve with seven blue tiles that he has nowhere to place – which means they fall to the floor section and break, giving him negative points. Everyone’s board is public information, which means planning becomes crucial. What do you need, when do you need to take it, and how can you avoid getting stuck with tiles you can’t use? 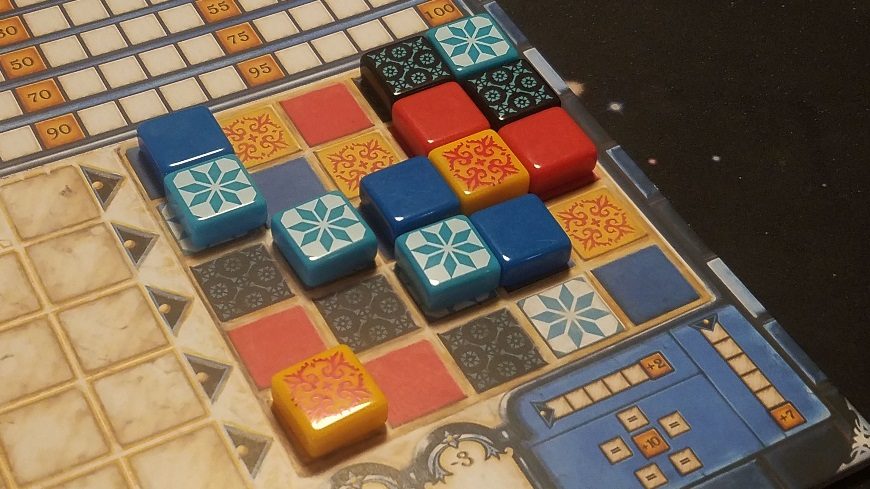 It’s a puzzle which is simple in concept, but devilishly clever in its execution. The decisions in this game can be agonizing, as one weighs up the risk and reward of each choice, and tries to figure out just how greedy they can be. If I take these three blue tiles from this factory, will I be able to snag those other two before someone else does? How badly does Dave need them? Maybe I should be safe and take these two red ones… but if I can get five blues that will be SO DAMN GOOD.

Azul couples this accessibility with an extremely attractive package. The box looks good, the tiles have beautiful designs on them and are made of a satisfyingly weighty resin. The player boards are large and colourful, and even the bag you draw the tiles from has a striking graphic.

This doesn’t impact the gameplay, but it undoubtedly enhances the experience and, perhaps even more importantly, makes it a great game to share with non-gamers.

Truthfully, I have nothing negative to say about this game. I don’t want to be hyperbolic, but it doesn’t really do anything wrong. I’ve yet to play it with anyone who doesn’t enjoy it, and I strongly recommend picking this up – it’ll be available in SA in a couple of weeks. You should be able to find it at Timeless Board Games or Raru. 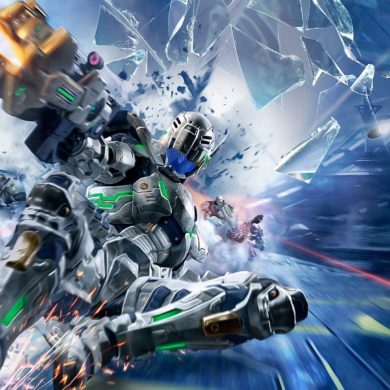 Bayonetta and Vanquish remasters in the works