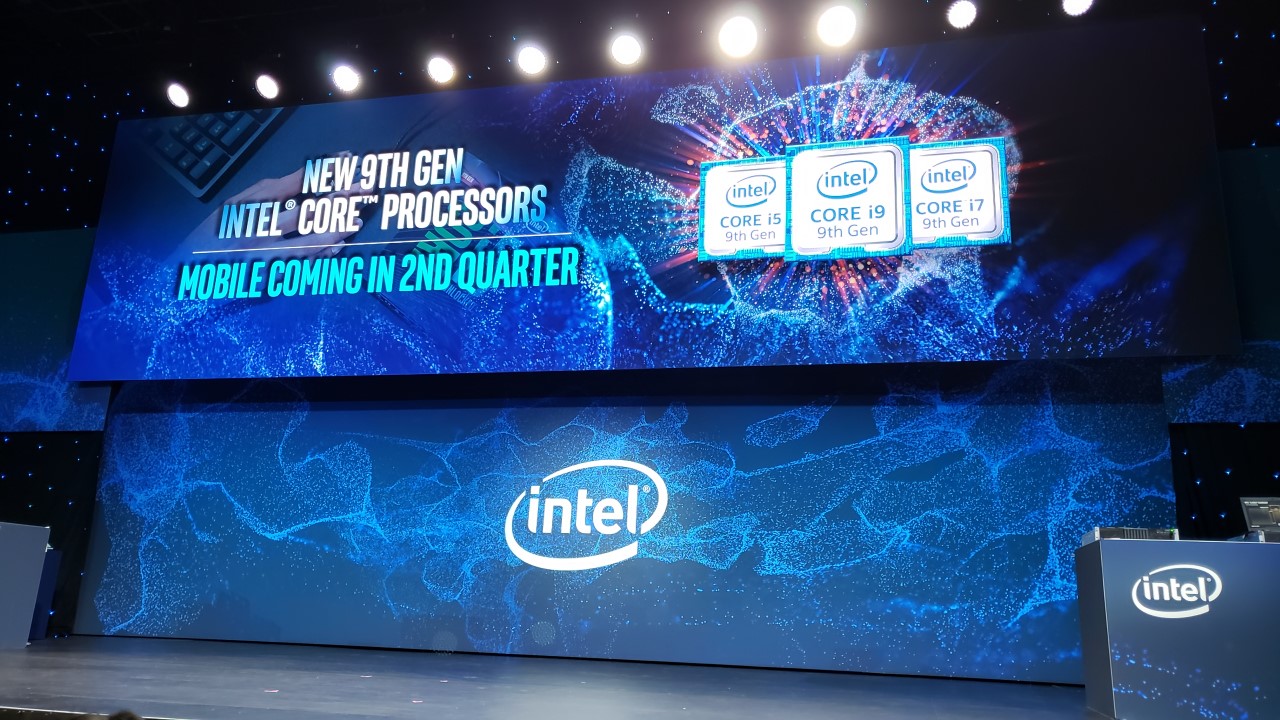 Intel’s CES presentation was highly anticipated because it was the first public show the company would be putting on after closing out 2018, a year that pretty much every vendor in the hardware industry would probably like to erase from their memory. This was a clean slate for Intel to showcase their new products, brief the public on their roadmap, and show investors that they could continue to be confident in the company’s future. They did all that, and more. 2019 probably won’t be a bumper year for Intel, but 2020 is going to be a fun one.

Nearly all of Intel’s new products demoed on stage were based on the company’s 10nm process, and that’s quite a load to bear. Intel’s move to 10nm production has been fraught with difficulties and delays, first expected for release in late 2015. It’s the first mishap the company has had in terms of foundry leadership in the industry, and it’s not something they can easily fix. They’ve been trying, and 2018 saw them struggle even more when 14nm production was too limited for the volume they needed.

So Intel committed themselves to a Holiday 2019 launch for 10nm products, and announced that it was “on track“. Ice Lake, Lakefield, their 5G modems, all of it requires this process to be functioning and ramping up to support high volume shipments. All of these products do matter in terms of what they can do for Intel’s portfolio and offerings to customers, but it’s nothing without a functioning process that doesn’t make the company bleed money. It’s all hands on deck from here on to get 10nm ready for the next phase of Intel’s plans.

Intel’s headlining announcement was Ice Lake U and Y series chips for mobile processors would be heading into production and selling in devices by Holiday 2019. The company had Dell up on stage showing off the company’s first notebook with Ice Lake U inside, but curiously the laptop was never turned on. There were, however, several demo machines on the stage which did have working Ice Lake processors inside. Ice Lake is a new design for Intel based on the Sunny Cove architecture, which includes hardware mitigations against Spectre and Meltdown. Aside from Intel’s Broadwell processors, Ice Lake will also have Intel’s largest graphics core to date on the same die, with 64 execution units and one teraflop of compute power. That’s about on par with the Radeon RX 550, which is quite impressive. Ice Lake is built with machine learning in mind, and even includes a fourth-gen image processor on the die to allow for more advanced cameras and depth sensors to be included on systems with Ice Lake.

Ice Lake tops out at four cores and eight threads, boasts Thunderbolt 3.0 over USB-C support, WiFi 6 support with Intel’s CNVi network adapters, and pushes the baseline memory support all the way to LP-DDR4X at 3200MHz. That’s a huge increase from the current baseline of DDR4-2400 in most notebooks, and it’s needed because Intel’s GPUs are always starved for bandwidth. Having around 50GB/s of memory bandwidth, the company says, is enough to keep the iGPU fed properly. This could be quite the competitive chip for mobile gaming on thin and light machines.

Intel has also been thinking about how they can improve battery life on Ice Lake, and they’ve come up with a raft of small tweaks that they’ll be sharing with notebook vendors building designs around Ice Lake to improve battery life to beyond 25 hours of runtime. We can also expect slightly thinner ultrabooks coming out late this year, although I don’t know how much thinner we want them to be. Apple will definitely be snapping these chips up in the future, especially given the improved graphics performance.

Project Athena was Intel’s next big announcement. This is a program similar to the Ultrabook Initiative that Intel headed up a decade ago. Under the Ultrabook Initiative, Intel gave money to notebook vendors building Ultrabooks as a way of cutting out the cost of R&D into the new form factor that Intel wanted to push into the market. Vendors received marketing assitance, money, and technical support from Intel’s engineers when building their products. Ultrabooks wouldn’t really exist today if it wasn’t for that program.

Project Athena is a similar idea geared towards the next generation of computers and notebooks, and some big names have signed on to the initiative. The goal of the project is to unite the industry in figuring out things that are holding back the PC platform in terms of portability and battery life, and improving the hardware scene for everyone in the business. This means that we’ll soon see more notebooks shipping with depth-sensing cameras for facial recognition, longer battery life, better designs, brighter displays, more connectivity that matters, and more power.

Lakefield is a new design for Intel, and it succeeds their Clover Trail family of Intel Atom and Pentium Silver/Gold processors. Designed for subnotebooks 14-inches and smaller, as well as tablets, Lakefield leeches off ARM’s big.LITTLE design by incorporating four new Atom processors alongside one single Sunny Cove core from the Ice Lake family. It supports up to four channels of LP-DDR4 memory, has the same 64 EU-wide graphics core as Ice Lake, and includes all of Intel’s new designs for their display outputs and their imaging sensor. It’s Ice Lake, but a lot smaller.

Intel says this was a one-off design for a single customer, but they felt that the idea was so good that the rest of the industry should also benefit. Who is that customer? Well, Intel was showing off a dual-screen device running Lakefield, and the board is built by Intel themselves (with reference designs available for their partners). The only company expected to debut a dual-screen device in the near future is Microsoft, as rumours have been piling up recently that the company will have a dual-screen, Surface-branded device for consumers in the future.

Lakefield is meant for 11-inch and smaller form factors, but it’ll also suit very low power applications that require Modern Standby support, like IoT devices and netbooks that need to eke out every ounce of battery life possible. The chip will idle at just 2 milliwatts of power consumption, which is incredibly low for an x86 notebook. The funny thing about this is that years back when Intel was making chips to compete in the phone and tablet market, this was exactly the kind of thing they needed to combat ARM’s domination. It only took them ten years. 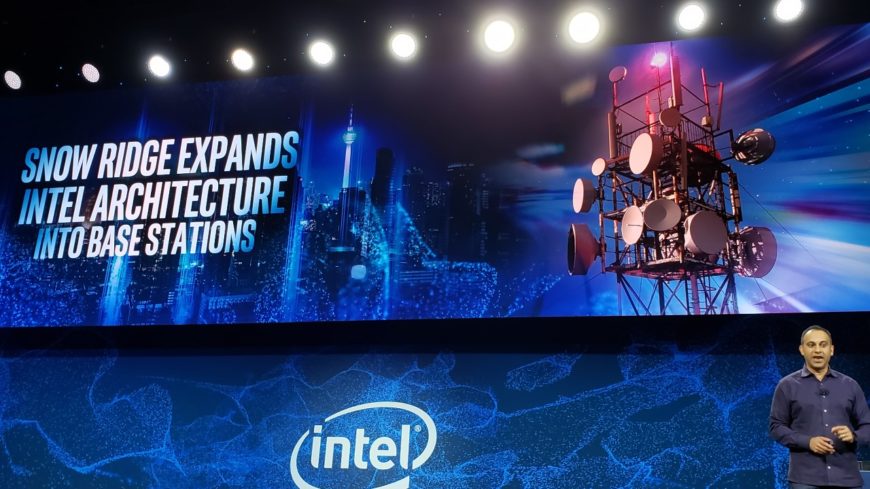 You may have heard of this new 5G thing. 5G is a standard that builds off LTE-A, enabling Gigabit LTE speeds over a much higher frequency band. It’s a challenging thing to build and roll out, mostly because 5G hasn’t been ratified by the IEEE yet and because base stations need to double in number across a given area to actually deliver the service as intended. There are other complicating factors too, such as the silicon that powers the technology on the base station and client level. 5G achieves higher speeds using multiple bands simultaneously, as well as MU-MIMO technology to give the client device a stronger connection.

Snow Ridge is Intel’s 5G base station, built from the ground up by the company and based on their 10nm production process. It’ll come shipped either as a small-form-factor cubed chassis, or as a rackmount 3U chassis with cabling running up the tower nearby. In the second half of 2019, Intel will be able to talk about their future 5G modems for client devices, and we’ll start seeing these rolled out in the United States next year.

This dovetails with the United States’ recent hostility to Intel’s competitor in the 5G space, Huawei. Huawei has their 5G equipment ready to go, but has recently been met with hostility from the Trump administration following accusations of the company allowing China’s Communist Party access to networks run by their clients. If this continues, and if Huawei’s devices and infrastructure solutions are banned in the US, Intel is set up for gaining a monopoly in the market thanks to close relations with network providers in the US. 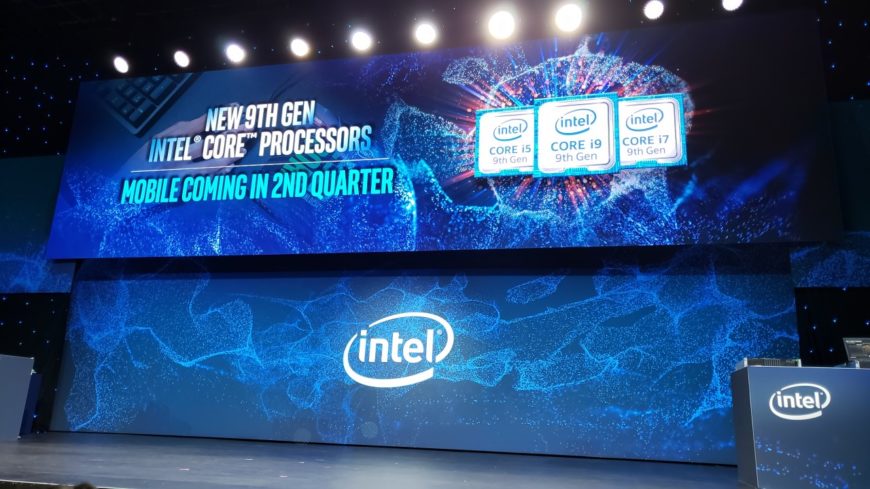 Finally, the last announcement from Intel’s conference, at least the one which matters to us as gamers (there were announcements about AI neural networks, servers, and self-driving cars as usual), is the coming of new processors in Intel’s Core 9th gen family. These are five processors in the Core i3 to Core i9 segment that lack integrated graphics, but they’ve only been disabled for yield purposes. These get an “F” label in the model name, such as the brand new Core i3-9350KF, and maintain the same TDP.

The chips all have the same base and boost clocks as the GPU-packing counterparts as well as the same cache arrangements. The only newcomer here is the Core i3-9350KF. It has 2MB of L3 cache per core, the highest base clock out of all of Intel’s chips, and a boost clock for the first time in a Core i3 processor. At an expected price of $140, the Core i3-9350KF will be going up against AMD’s Ryzen 5 2600 and the Ryzen 5 2400G, which boasts Vega 11 graphics and SMT for an additional four virtual cores. It’ll be a tough sell for Intel because modern videogames now crave more cores, and most gamers might opt for six-core chips instead to give themselves some headroom.

Intel also announced that mobile versions of their 9th Gen processors would be shipping in the first quarter of 2019. AMD is expected to have their Ryzen 3000 Mobile series out by then as well, with the earliest notebooks based on the Ryzen 5 3550H coming as soon as February 2019. These 9th Gen processors will be worlds apart from Intel’s Ice Lake processors with their stronger graphics capabilities, so you might want to do some thinking about your choices before buying a new notebook this year.

That’s all from Intel this CES! Stay tuned for more from AMD and NVIDIA, and the rest of the brands at the expo. 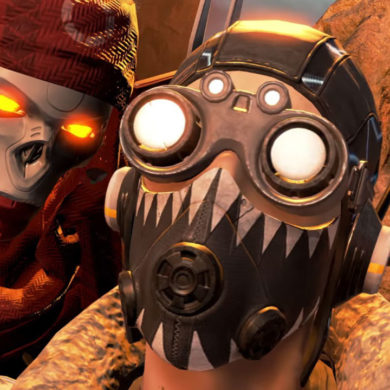