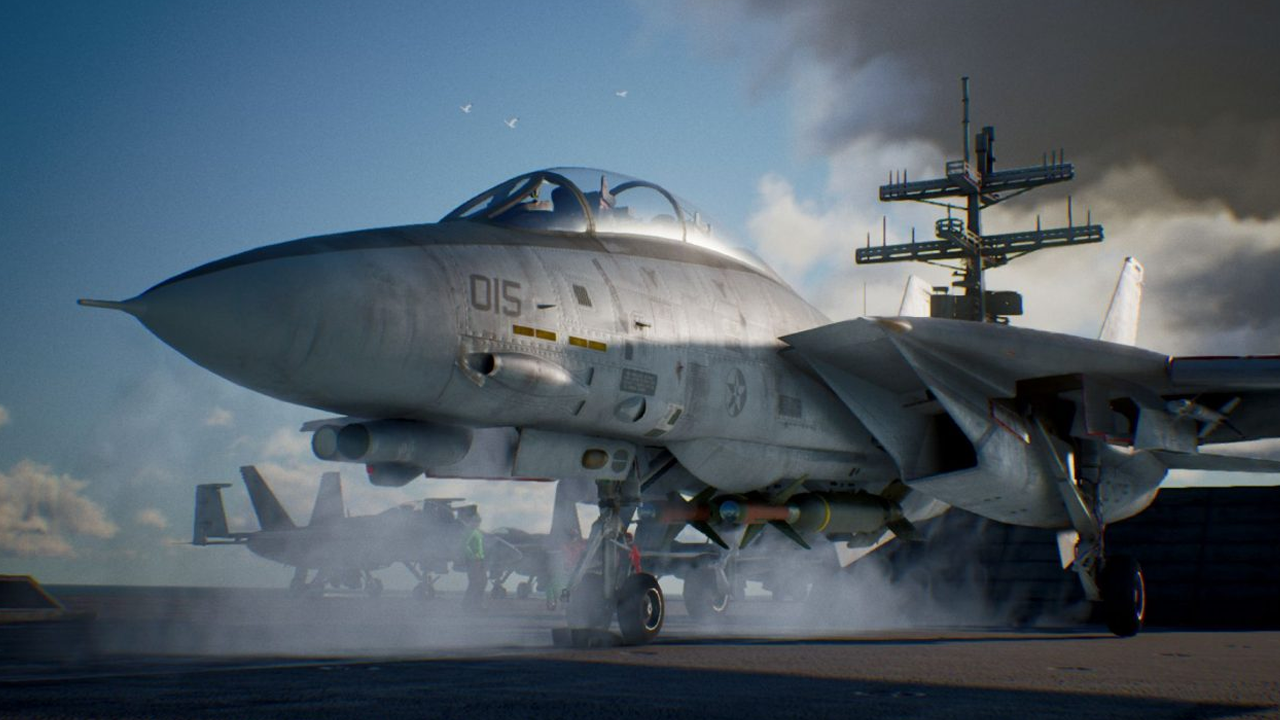 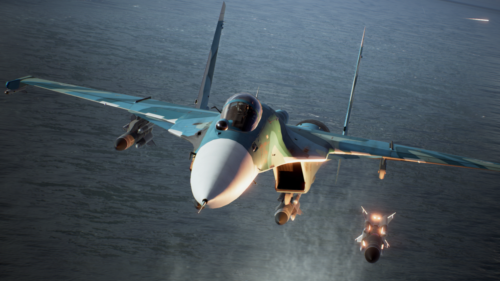 Is it me, or has the space flight genre undergone a small revival in the last few years? Elite Dangerous, No Man’s Sky, Everspace, Starlink: Battle for Atlas, Manticore: Galaxy on Fire – all space flight games of varying stripes – but strangely, air combat games don’t seem to have seen this resurgence of interest, at least not that I’ve noticed.

The only one I can think of offhand is Sky Rogue – which isn’t bad by the way, if you fancy a bit of bite-sized, air combat with rogue-lite elements and an arcade feel not unlike Ace Combat… Speaking of which, Ace Combat 7: Skies Unknown was released last Friday, a AAA air combat game at last. Although there’s one major thing to bring up if you’re considering buying it, and that is the style of game. Ace Combat is to flight simulators what Ridge Racer is to racing games: an arcade distillation of the fun bits that tosses aside all the tedious parts, like realism. But if you’re down with that, then you’re in for a treat.

In all Ace Combat games, you can execute crazy manoeuvres that would crash most real planes or even tear them apart – and while it’s possible stall your plane if you lose too much speed, the game is very forgiving about it. You can also carry ridiculous amounts of missiles and other weapons, more than 80 of them in some cases, which would weigh more than the damn plane in reality even if you could fit them all on board. Some of the weapons are wacky as hell too, such as clusters of eight missiles that can clear out entire squadrons of enemy fighters, or conceptual rail guns and such based loosely on actual real-life concept weapons. 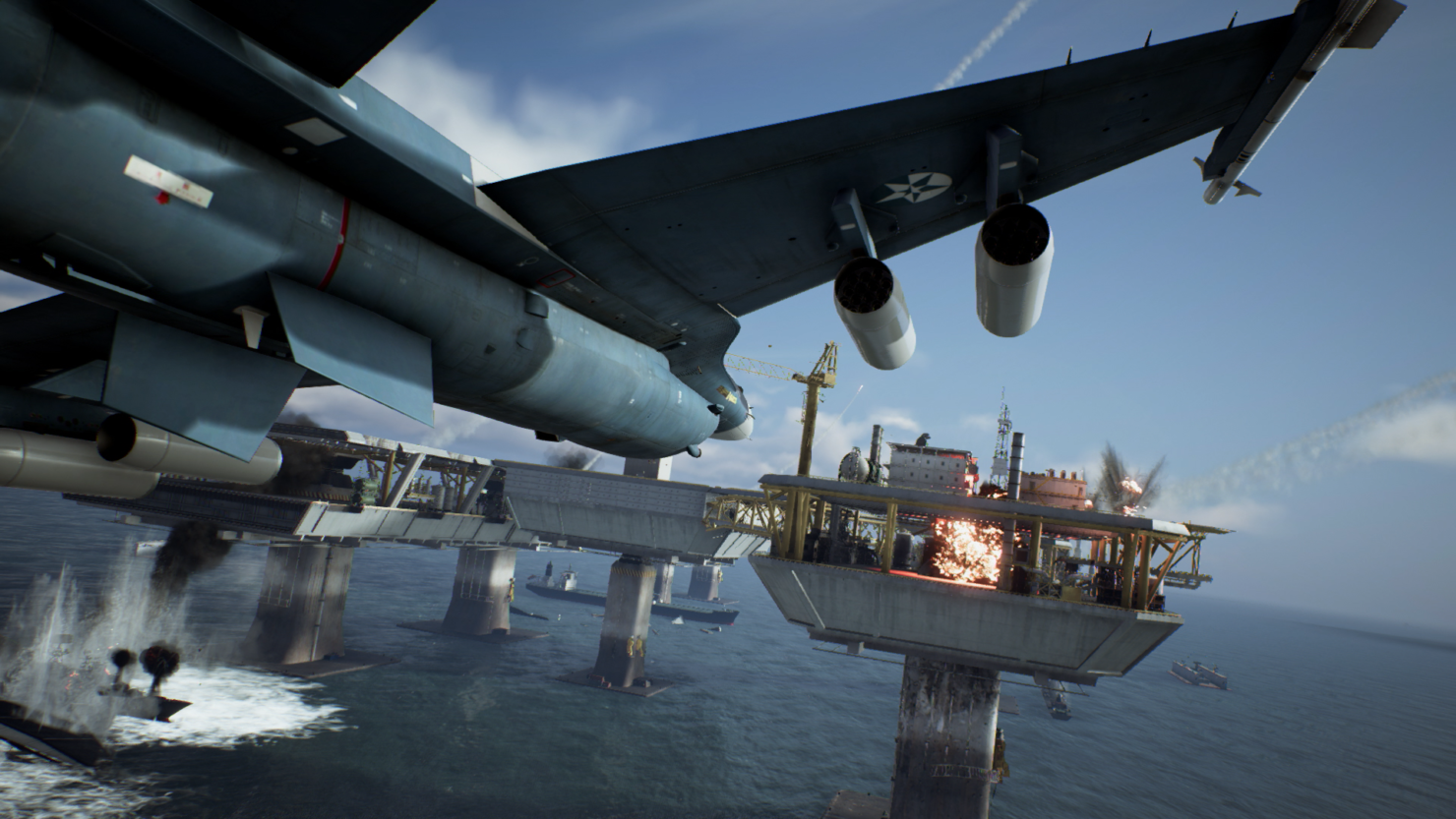 Ace Combat 7 continues the series’ tradition of storytelling that is both oddly dry and political, but also anime-ish and melodramatic. It’s set in the Strangereal universe, on a world almost identical to our own, except for the arrangement of continents and their names. The narrative is framed by cutscenes telling the story of Avril Mead, an amateur pilot arrested for flying during war time, as she chronicles her incarceration at a military prison alongside other criminals who are forced to man a derelict air and fly missions in ramshackle aircraft to draw the attention of their enemies. There’s also a bit of man-versus-machine drama going on as the antagonists deploy drones more than manned fighters.

The player is cast in the role of a voiceless, faceless fighter pilot called Trigger, who’s accused of shooting down the former president’s plane and sent to same penal facility as Avril. Their stories cross over at points. Trigger’s story is told mainly in the briefings, and maybe it’s just me, but I find it as dry and hard to follow as a Tom Clancy yarn, with names of countries and organisations and military units I simply can’t keep up with. A lot of plot developments happen while you’re mid-mission too, and it’s hard to pay attention to the unfolding intrigue while you’re pulling 9Gs to avoid a missile.

The single-player mode is pretty much a straightforward progression of missions with different goals interspersed by with briefings, debriefings, and the occasional cinematic. Before each mission you can choose which plane you want to fly, which special weapon it will have, and which parts you want to equip. More planes, parts and weapons can be bought from the Aircraft Tree with points acquired from playing any mode. The missions can have all kinds of objectives such as straight up dogfighting, destruction of ground targets, escorts, radar dodging, and so on. Of course, something unexpected always happens, like reinforcements showing up, super weapons being deployed, having to flying through obstacles courses, anything. The fact that you can use the clouds tactically was supposed to be highlight, but I find them more of hindrance than a help. They do a good job of shielding enemies from my missile locks, though – it’s just a pity it doesn’t do the same for me. 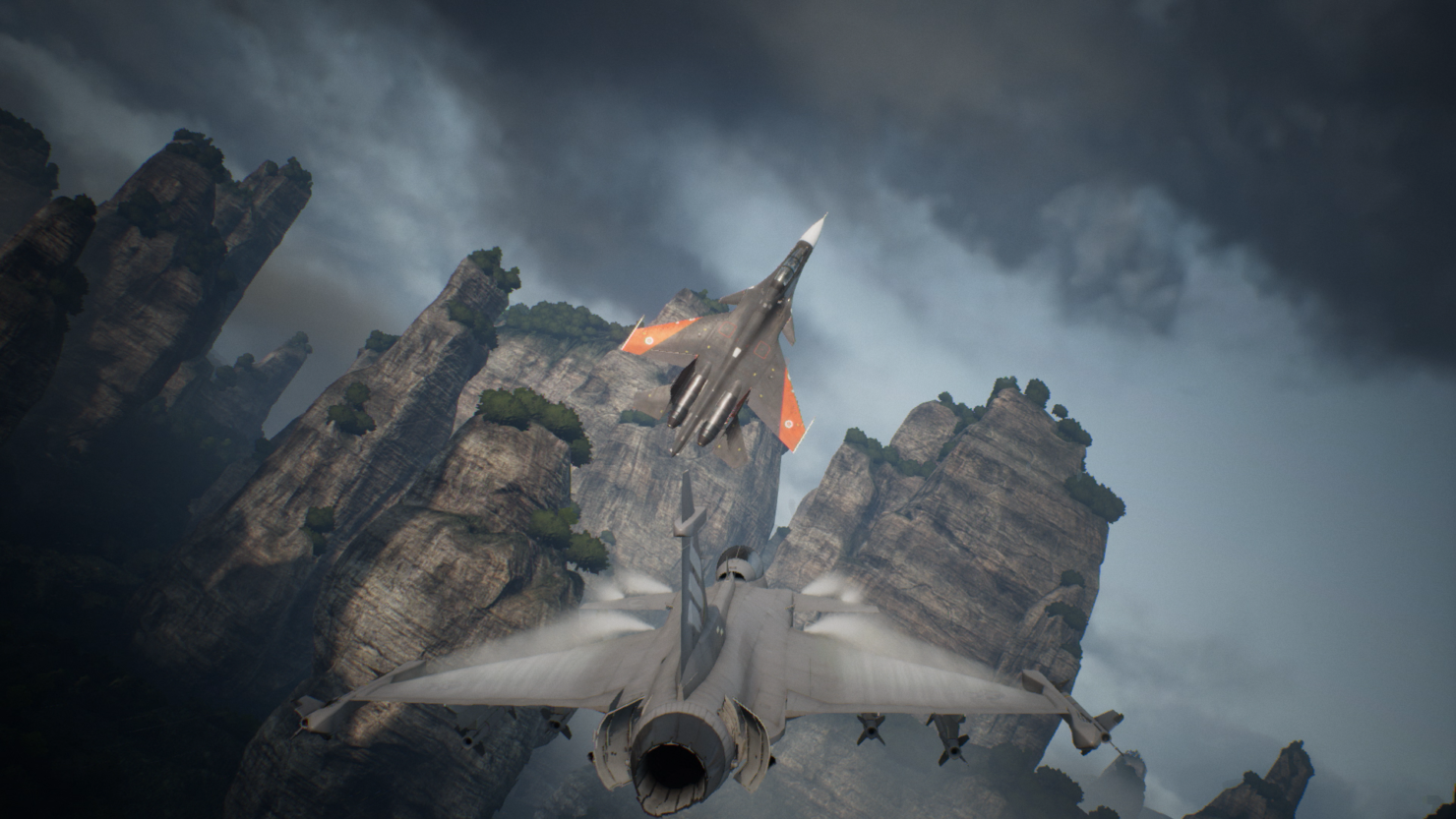 If there’s one piece of advice I’d offer, it’s to start the game on normal difficulty. I did what I always do and chose the hardest setting right out of the gate and no game has ever made me regret it, until now. Everything that was going fine, it was a bit challenging but not unmanageable – and then mission five happened. Holy crap! No matter what I did, I couldn’t win. If I cleared up the fighters before trying to kill the bombers, they’d bomb the base; and if I went after the bombers, the fighters would ram dozens of missiles up my tailpipe – and they’re trigger happy on hard mode. So I had to drop to normal mode, which requires a restart, but at least the planes and weapons you unlock transfer between playthroughs, so next time I try hard mode I’ll have some powerful end-game planes to use.

The multiplayer is pretty basic with only two types of match available – Battle Royale with up to eight players, and Team Deathmatch with up to four players on each side. Either way I had the same experience, enter the battle and get shot down by the players with superior gear before they even got into my paltry missile range. I imagine the gear issue will even out with some grind but, meh, it takes a lot to get me interested in the multiplayer side of a game and this isn’t doing it. There are a selection of multiplayer only parts you can unlock, and playing multiplayer is a good way to earn currency for the main game too, since you’ll get a lot, even if you suck.

If I had to find some things to bitch about, my primary one would be the HUD. It’s your standard flight sim HUD, but when you’re facing bright clouds or sky, it becomes practically frickin’ invisible. An option to make it more opaque or choose a colour other than pale green would have been nice. I was also tempted to whine about the missile dodging not always seeming to work, but I can’t guarantee that my own ineptitude isn’t to blame, so I’ll refrain. 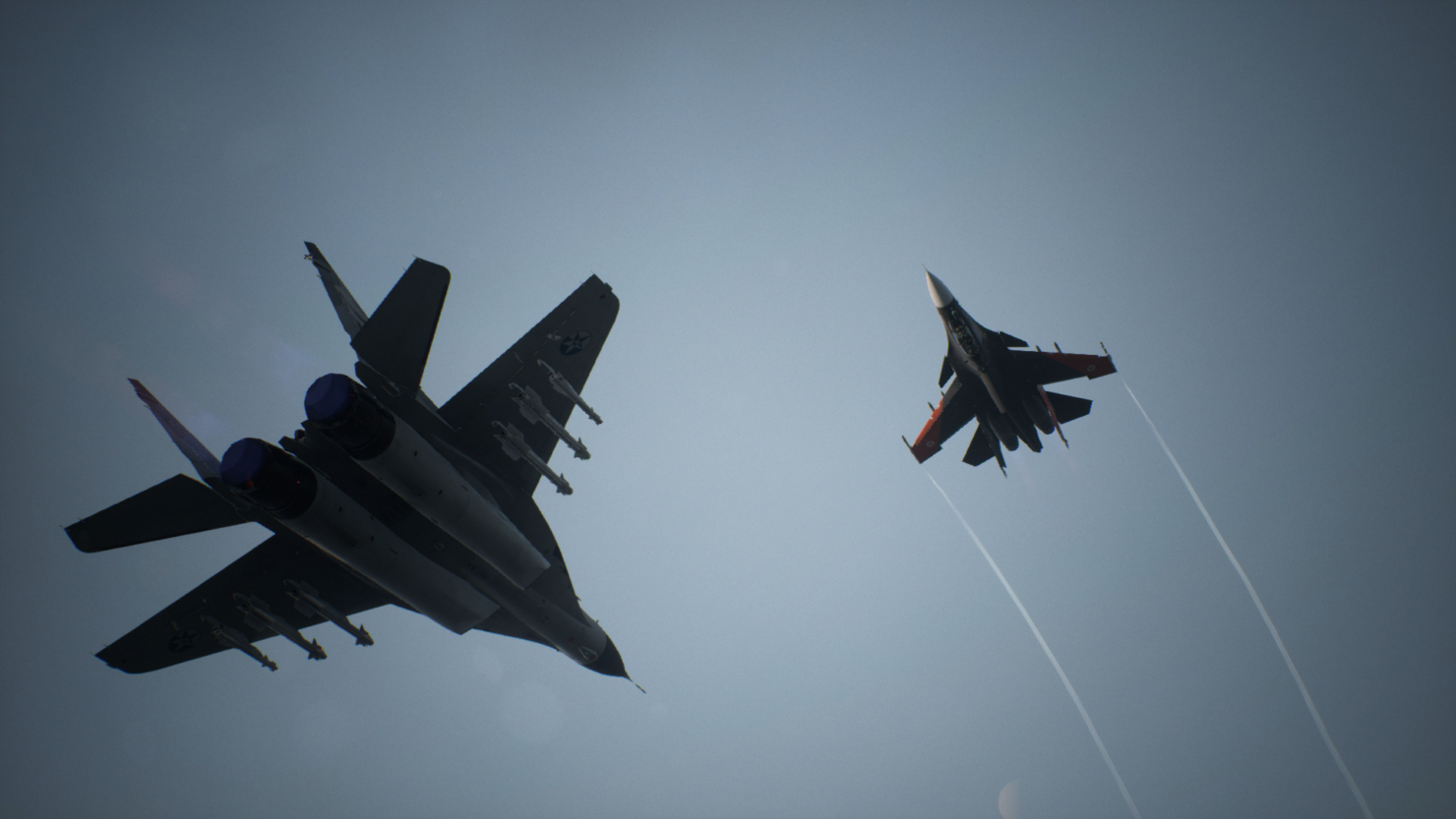 If were considering this game for multiplayer thrills, factor in whether or not you’ll enjoy endlessly flying in circles trying to gun down other players in the same old deathmatch. Maybe more modes will be patched in, who knows. But the single player experience where it’s at. The missions are varied, the story is great if you can keep it straight and there’s always something interesting happening to keep you on your toes.

ACE COMBAT 7: SKIES UNKNOWN
BOTTOM LINE
AC7 is exactly what you'd expect from the series, an arcade-ish approximation of a flight sim with slick controls and a fairly compelling story. The multiplayer didn't seem like anything special to me, but some players may enjoy it.
PROS
I've only played Ace Combat as a series intermittently, so I don't know how the plane selection holds up to previous games – but there are plenty enough for my liking
Beautiful visuals and atmospheric effects, such as condensation from the clouds that streaks off your windscreen and even icing if you go in too deep
That abomination known as Dogfight Mode from Ace Combat: Assault Horizon is not in this game – thank $#@* for that!
The version I bought came with Ace Combat: Squadron Leader, a brilliant installment from the PS2 era, although I'm not sure if it was only for pre-orders
CONS
The multiplayer has only two modes, both variations on deathmatch, and I don't find either of them particularly fun
Your HUD is a pale green colour and tends to fade into bright backgrounds such as clouds or afternoon skies, making it hard to track targets – and if anyone argues this was intentional I'll argue that it was still stupid
Some of the missions are ridiculously hard, even on normal difficulty
85 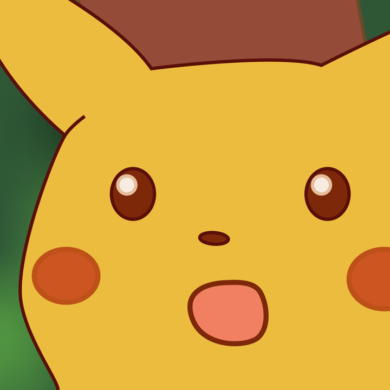 “We, the people of the United States” petition Trump to cancel Pokémon Sword and Shield